It definitely wasn’t popular when he said it.

Three years ago, former premier Jim Prentice told Albertans to “look in the mirror” when it comes who’s responsible for the province’s financial woes.

“Basically,” he told CBC’s Alberta@Noon, “all of us have had the best of everything and have not had to pay for what it costs.”

Within hours, social media posts assaulted Prentice for his moment of candour. The hashtag #PrenticeBlamesAlbertans trended for a time on Twitter. Many say the comment helped Rachel Notley and the NDP win the 2015 election.

“We’re used to living high on royalties,” said Calgary voter Kelly Kernick, who recently participated in a number of focus groups conducted by CBC News about political issues, ranging from the likeability of the province’s political leaders to Alberta’s burgeoning debt. 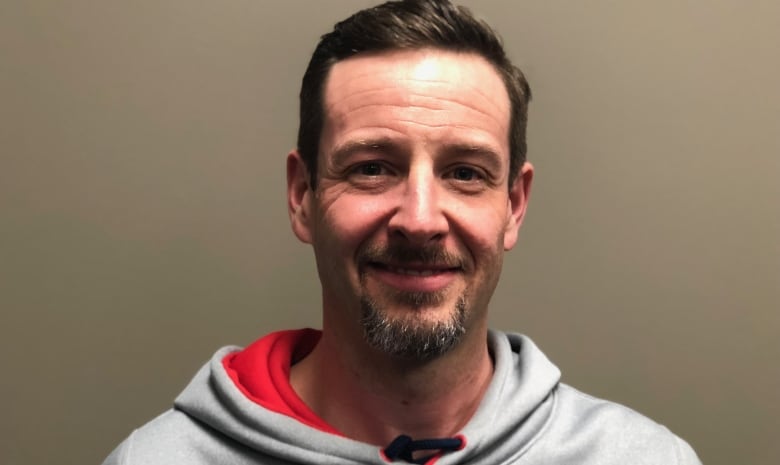 “It’s rare,” said Kernick, “that people vote to have more taxes and to cut their services.”

And a poll conducted for CBC News confirms that.

While 58 per cent of Albertans want a balanced budget, a large number also don’t want to pay more taxes or cut spending on social programs such as health and education.

It’s a fiscal fantasy, in fact.

Historically, Alberta has relied heavily on taxes from fossil fuel extraction to pay for a lot of government services, and to keep taxes at some of the lowest levels in Canada.

But what taxpayers want — and what’s economically possible — are at odds, says University of Calgary economist Trevor Tombe.

“If you want to eliminate a deficit, you either need to lower spending or you need to raise revenue or you need to do some combination of the two,” said Tombe. 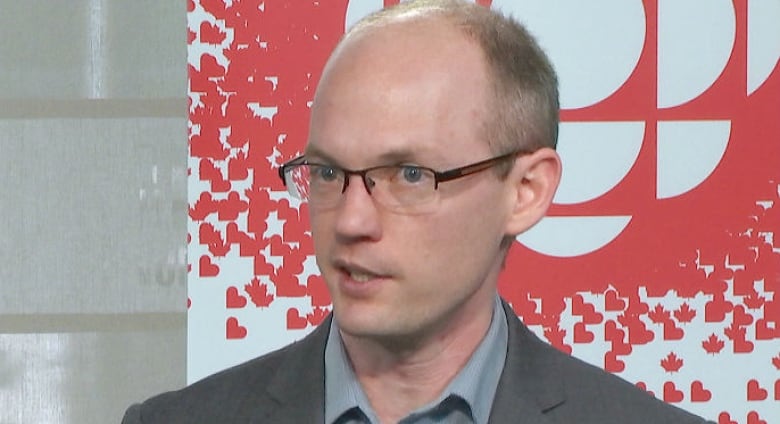 Trevor Tombe is an economist at the University of Calgary. (CBC)

But public perception is often political.

Although a majority of Albertans want to see the government balance its books, 79 per cent say now is not a good time to make significant cuts to social programs.

But that’s hard to do when the province’s economy isn’t cooking with oil and gas like it did during boom times.

Over the past 60 years, in fact, no Alberta government — of any stripe — has ever balanced a budget without relying on oil and gas money.

So how to reconcile these discordant desires? We put that to our voter focus groups. 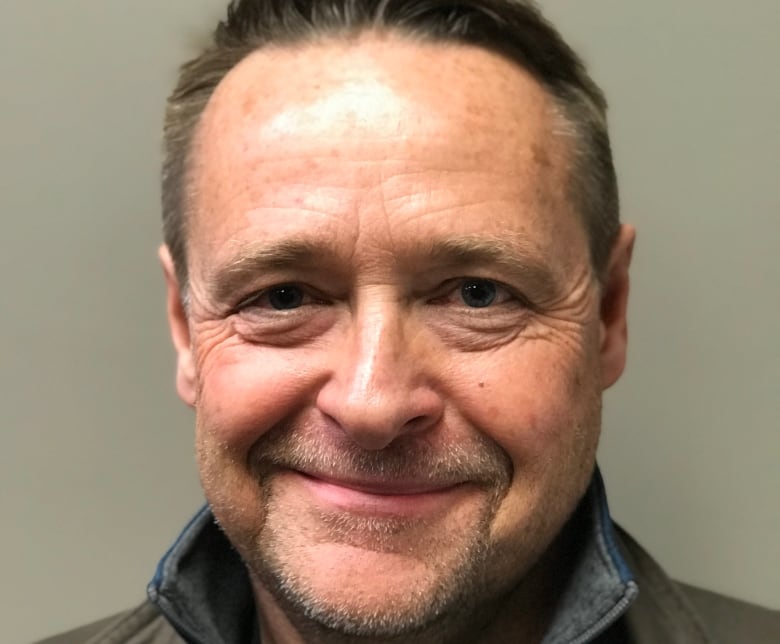 Many focus group participants, from across the political spectrum, suggested the government concentrate on finding more efficiencies to reduce government spending.

The province, said 45-year-old Paul Day, “need[s] to be more efficient … the revenue is there, it’s just how it’s organized.”

It’s a sentiment echoed by Airdrie’s Angela Burford, who participated in the same group of centrist voters as Day .

“I think there’s a lot of people who take advantage of public money,” said the 41-year-old Burford.

Calling it “frustrating,” University of Calgary political scientist Melanee Thomas is perplexed by the disconnect between what voters want and what they are willing to pay for.

“What do we expect? Seriously?” asks Thomas in response to the public sentiments unearthed by the CBC News survey of 1,200 Albertans.

“Honestly,” said Thomas, “at the end of one of the most deep recessions we’ve ever seen — where the bottom really fell out of oil and gas — we still haven’t actually grown up very much about… our public finances.”

The CBC News survey pressed people to say how they’d like to see the province deal with its deficit.

When forced to choose how to get the province’s books back in the black, a plurality (42 per cent) of Albertans think the NDP government should emphasize both spending cuts and raising taxes.

More than a third of Albertans want the government to prioritize only spending cuts.

Only eight per cent want to see taxes hiked alone.​ 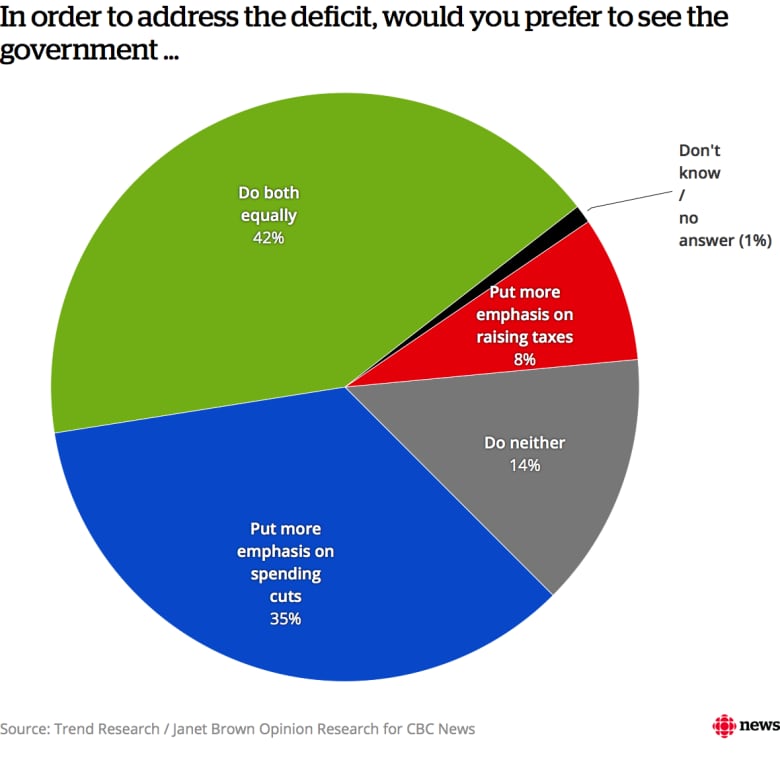 The focus groups found support for a range of ideas aimed at returning the province to a balanced budget.

In addition to being more efficient, “we need to raise revenue,” said 45-year-old Paul Day, who participated in the self-described centrist focus group.

But 66-year-old Don Rausch, who took part in the right-wing focus group, thinks cuts may be necessary, stressing education and health have become untouchable.

“Everybody,” he said, “sits there and says we need these, so we don’t want to jeopardize them, instead of taking a hard look at them and saying how can we make them better.” 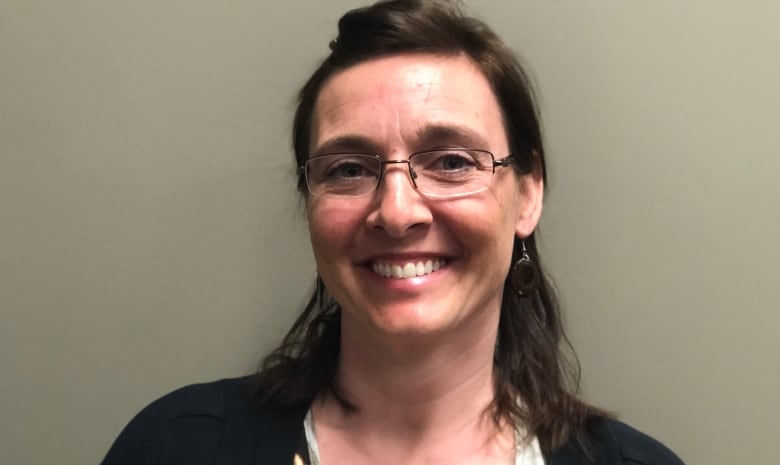 But Tamara Keller sees it differently. The 43-year-old Calgary voter, who participated in the left-of-centre group of voters, supports government spending on social programs.

Keller says she has a friend waiting for surgery.

“She’s in pain for weeks on end,” said Keller. “This isn’t right. This isn’t the type of society I want to live in.”

Saskatchewan recently struck a balance between tax hikes and spending cuts to deal with its deficit, also sparked by declining royalty revenues.

The U of C’s Trevor Tombe recommends Alberta adopt a blend of spending cuts and tax increases like its neighbour to the east. He believes Alberta’s government needs to show it can get its financial house in order before it asks taxpayers for more money.

“It’s difficult to see,” said Tombe, “how politically a government could just raise revenue alone to deal with the deficit.”

Tombe believes tough choices about spending on health care, in particular, are required.

According to Tombe, a big chunk — potentially half of the money the province needs to trim to deal with the deficit — can be attributed to high levels of health spending on, for instance, compensation for doctors.

Health care is a difficult area not just because it is so big, but because it does involve like real choices that affect people’s health and, potentially, life or death decisions as well.– Trevor Tombe , University of Calgary economist

Other tough choices, says Tombe, might involve scaling back health services in rural parts of the province. Admittedly, the choices are not easy.

“Health care,” said Tombe, “is a difficult area not just because it is so big, but because it does involve like real choices that affect people’s health and, potentially, life or death decisions as well.”

And as the CBC poll found, Albertans may be prepared to pay more taxes only if the government also starts making some of those tough choices.

The random survey of 1,200 Albertans was conducted using a hybrid method between March 13 to April 5, 2018, by Trend Research under the direction of Janet Brown Opinion Research. The sample is representative along regional, age, and gender factors. The margin of error is +/-2.8 percentage points, 19 times out of 20. For subsets, the margin of error is larger.

The survey used a hybrid methodology that involved contacting survey respondents by telephone and giving them the option of completing the survey at that time, at another more convenient time, or receiving an email link and completing the survey online. Trend Research contacted people using a random list of numbers, comprised of half landlines and half cellphone numbers. Telephone numbers were dialed up to five times at five different times of day before another telephone number was added to the sample. The response rate among valid numbers (i.e. residential and persona) was 20.8 per cent.

Calgary: The Road Ahead is CBC Calgary’s special focus on our city as we build the city we want — the city we need. It’s the place for possibilities, a marketplace of ideas. Have an idea? Email us at: calgarytheroadahead@cbc.ca

More from the series: