Explosions have intensified on Hawaii’s Kilauea volcano, spewing ash and triggering a red alert for aircraft for the first time since the latest eruption began almost two weeks ago.

An aviation red alert means a volcanic eruption is under way that could spew ash along aircraft routes, the U.S. Geological Survey (USGS) says on its website. The warning was raised to red — the highest threat level for aircraft — from the previous orange level (when volcanic ash emissions into the air are less serious) on Tuesday.

Ash and volcanic smog, or vog, as it is called, rose up to more than three kilometres above Kilauea’s crater and floated southwest, showering cars on Highway 11 with grey dust and prompting an “unhealthy air” advisory in the community of Pahala, 29 km from the summit.

Ash was also a new hazard for residents of Hawaii’s Big Island, already grappling with volcanic gas and lava that has destroyed 37 homes and other structures and forced the evacuation of about 2,000 residents.

A shift in winds was expected to bring ash and vog inland on Wednesday and make them more concentrated, said John Bravender of the National Oceanic and Atmospheric Administration (NOAA).

The observatory warned the eruption could become more violent.

“At any time, activity may become more explosive, increasing the intensity of ash production and producing ballistic projectiles near the vent,” the HVO said in a statement.

Ash is not poisonous but irritates the nose, eyes and airways. It can make roads slippery and large emissions could cause the failure of electrical power lines, said USGS chemist David Damby.

College exchange student Constantin Plinke, 24, was planning to go to the Hawaii Volcanoes National Park before it was shut.

“We had a big list of things to do and maybe 80 per cent of them were in the national park,” he said, after stopping by the side of the road to watch ash plumes rising into the air.  “It’s sad.”

The area taking the brunt of the eruption is about 40 km down Kilauea’s eastern flank, near the village of Pahoa. Lava has burst from the ground to tear through housing developments and farmland, threatening one of the last exit routes from coastal areas, state highway 132. 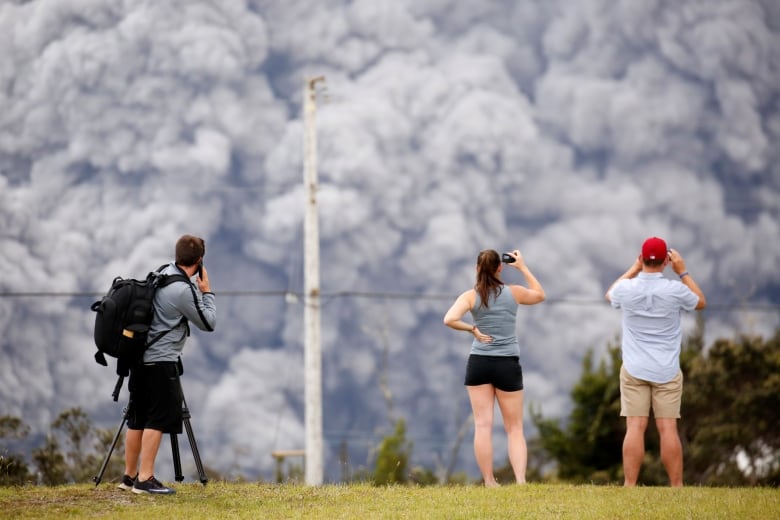 Ash erupts from the Halemaumau crater during ongoing eruptions of the Kilauea volcano near the village of Volcano on Tuesday. (Terray Sylvester/Reuters)

The latest fissure in the earth opened on Tuesday, spewing lava and toxic gases that pushed air quality into “condition red” around Lanipuna Gardens and nearby farms, causing “choking and inability to breathe,” the Hawaiian Volcano Observatory and Hawaii County Civil Defence said.

Road crews put metal plates over steaming cracks on nearby Highway 130 and reopened it to give coastal residents an escape route should a lava flow reach the ocean and block another road, Highway 137, Civil Defence said.

No major injuries or deaths have been reported from the eruption. A looming menace remains the possibility of an “explosive eruption” of Kilauea, an event last seen in 1924.

Pent-up steam could drive a six-kilometre ash plume out of the crater and scatter debris over 19 km, the USGS said.