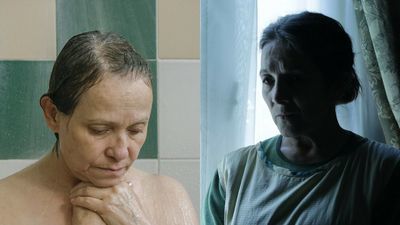 Shaken out of their numbingly static existences by seemingly insignificant occurrences, the protagonists of Natalia Almada’s “Everything Else (Todo lo demás)” and Cecilia Atán and Valeria Pivato’s “The Desert Bride (La novia del desierto)” reevaluate their ability to experience kindness in the form of a sincere embrace, a comforting gesture, or an attentive listener. These women, hardened by tragedy and isolation, have been playing supporting roles in their own lives, until a small detour from their routine prompts an unassumingly enormous transformation.

In the former, Mexican actress Adriana Barraza (“Amores Perros,” ‘Babel”) is Doña Flor, a bureaucrat trapped in the monotony of a job as a hated gatekeeper for those in need of an important document, and who goes home every night without much to look forward to. The other, portrayed by Chilean thespian Paulina García (“Gloria,” “Little Men”), is Teresa, a live-in housekeeper who after working for 20 years for the same family is being shipped off to work elsewhere.

Anesthetized and isolated, Doña Flor and Teresa relinquished any hope for meaningful interactions beyond their reduced universes. But through swimming lessons with other women her age and a road trip with a joyous stranger, respectively, their fire is reignited.

For both Latin American actresses these films represent the rare chance of playing a substantial lead role, both ditching dialogue for internalized performance, and doing so in projects helmed by women. “Everything Else” is Barraza’s first-ever lead role in cinema and “The Desert Bride” is García’s first lead role in a movie by a female director. Beyond all the parallels between these dramas and the people involved, they are also features in which framing and the composition of a shot is pivotal to the viewer’s understanding of the characters’ worlds.

Speaking from Chile, García laughed when she explained people always ask her if roles for women around age are scarce, because the answer is always yes. She believes it’s curious that middle-age people and those who are even older don’t often see themselves on screen. “There are less roles for us because we probably sell less and that means that few roles like this one are written. There is an economic reason behind it, but it’s funny because older people are the ones that go the movies the most,” she noted.

Currently shooting in Austin, Barraza reaffirmed the unfortunate truth of our culture’s obsession with youth, which prevents an actress like her from featuring more prominently in narratives. “There are not many stories about women of a certain age. I’m 62-years-old, “Babel” and “Everything Else” have given me the possibility of telling the story of a woman my age.”

“We are afraid of getting older,” adds García as a likely reason for the landscape she and Barraza face, “But with the years comes a calmness that you didn’t know was going to come. There is so much anxiety when you are young. There are so many expectations that of course are never achieved. There is a lot of movement, indecision and anxiety about what’s to come. When you get older all of that ends and there are other new things that are also interesting.”

Although García’s tempered rationalization of the problem is inspiring, it’s still outrageous to think an Oscar-nominated actress like Barraza and a Berlin-winner star like herself have to make do with small part because the market doesn’t consider them viable assets to spearhead a cinematic venture.

Early in her career, Adriana Barraza was also forced to accept that being a leading lady in her native Mexico wouldn’t be possible because of the industry’s blatant superficiality.  “When I started working in television it was very clear that my physical appearance was not in line with the beauty standards of television, but my acting did fit in regardless. I played many supporting roles. I didn’t have the height or complexion for the lead roles, but I always made my parts memorable.”

Having to take multiple jobs to support herself and her family for many years, the Academy Award nomination finally allowed her to make a living as an actress. For the first time in her career, Barraza was offered roles, sometimes without even auditioning, because being in the running for the most prestigious Hollywood prize had validated her decades-long career in the eyes of the international film industry. She, however, takes it all with a grain of salt and knows that glamour is just a mirage.

“All the red carpets and these types of events, I’ve lived them and I will continue to live them as a fairy tale where you wear a beautiful outfit, like when you were little and wore your mother’s dresses to feel like a princess. I never forget that’s all just an instant, and everything else is about the work.”

Like their characters in “Everything Else” and “The Desert Bride,” the actresses have often been relegated to the background of the tales they help tell. In bringing the fictional women they play to the forefront, they in turn are doing the same for themselves. “I thought it was very attractive that the character’s journey started in such a secondary place as a housekeeper, but that she eventually goes into her own adventure searching for something absurd, like a suitcase that only has three or four insignificant things, but finding herself in the process,” noted García. “It’s a character we rarely see, and if we see them they are generally in background and we know very little about their lives.”

Barraza, who previously also embodied a housekeeper lost in the desert in Iñárritu’s “Babel,” was confronted with uncharted territory in Almada’s naturalistic approach. She was the only professional actor among a cast of untrained performers. The director had previously only worked in documentary, so for her first outing in fiction, she chose to create a hybrid setting for Barraza to access a powerfully subdued turn.

“What I found immensely difficult was being the most veridical possible, which something I strive to do in all of my works, and when you have the wonderful limitation of having to work with non-actors, you have the responsibility of bringing down your acting in terms of tone to match them. You have to try to be a person and stop being a character. It’s very difficult, and it was really hard for me,” explained the actress about confronting the verité filmmaking style.

Lines are few and far between, for Doña Floor and Teresa. One is surrounded by millions in Mexico City and remains invisible, and the latter is engulfed by a vast arid panorama where it’s easy for her to go unnoticed. Throughout her ordeal to recover her luggage, accompanied by El Gringo (Claudio Rissi), an infectiously welcoming truck driver, Paulina Garcia’s character undergoes a spiritual awakening by the hand of nature, that manifest on her exterior presence. By the time she victoriously chooses her own fate near the end, Teresa looks like an entire different person. Her hair blows in the wind and a smile adorns her rejuvenated face.

Without dialogue in the way, García is enabled to focus on the almost undetectable transition that graciously unfolds, as Teresa gets further away from her uptight past and for the first time considers a different future. “I love characters of few words because they allow you to move in multiple directions, which when you have a character that experiences a sudden and significant change, like she does over the course of the story, the viewer can understand it, can follow it, and can believe it.  Characters are much more malleable for me when they have little dialogue.” When Teresa finally utters more than monosyllables, mostly with her impromptu travel companion, it’s an emotional breakthrough.

In contrast, Doña Flor spends a large portion of her day engaging in arguments and tedious exchanges while processing applications for diverse purposes. She instead finds solace in the unspoken tenderness and silent camaraderie from other women at the pool. The water and the quiet of the locker rooms serve as delicate armature for someone who is constantly vilified by the general public. “This is one of the projects I’ve value the most in my heart because of how difficult and beautiful the story is. What the character does is a small feat, but an enormous intimate decision for her,” said Barraza.

Paulina García and Adriana Barraza have both tested the waters in American independent productions: García most recently in Ira Sachs’ “Little Men,” and Barraza in “Cake,” starring Jennifer Aniston. They have both traversed their countries’ limited attempts at highlighting their indelible artistry, and jumped a larger pool of opportunities abroad, because, as García puts it, sometimes being lost in the great wide open is safer than staying still.

“When [Teresa] leaves that home she is just like when a snail is left without its shell, and when she goes into the desert she feels as if it’s another shell but what’s interesting is that this new shell is immense, and there is room in it for more than just herself. When I walked through the desert alone I really liked the sensation of feeling free but at the same time protected by that space.”

“Everything Else” and “The Desert Bride” are now playing in NYC and will expand to other cities soon.

Interviews were conducted in Spanish and translated to English by the author.