There’s a new contender as a potential home for Amazon’s second headquarters, though it’s not an official bid.

This one comes from Rob McKinley, publisher of the Lac La Biche Post, who penned an open letter to the company in an effort to convince it to set up shop in his hamlet.

“I think it was just a little bit of fun,” says McKinley. “It’s definitely a column, it’s kind of like a little letter to Santa that a kid would write.”

Amazon recently sent out a request for proposals for new locations, saying it plans to hire up to 50,000 employees over the next 15 years for its second location.

That would be quite a boost for a hamlet of 2,300 people.

McKinley admits the letter started as a joke, but as he wrote he began to think the idea might have merit.

“Definitely tongue firmly in cheek,” he says. “However, there’s a little thought in the back of your mind … maybe, maybe this might work.”

McKinley is taking a page out of Amazon’s playbook by offering a massive discount.

“What is the lowest bid for your new North American distribution location so far?” he asks in the letter. “Lac La Biche County in beautiful northeastern Alberta will offer 40 per cent less!”

Will Lac La Biche be able to roll out the welcome mat for Amazon? (Google maps)

McKinley also points out the low cost of living.

But that’s not all.

The deal also comes with a quality of life that McKinley calls exceptional.

“We have a giant recreation complex where you can swim, skate, run, bike, skydive, hunt,” brags McKinley. “Of course, we’re talking about the biggest recreation area with a roof of clouds and walls of trees. The Great Outdoors is on our doorstep.”

It’s an ambitious pitch for a community that has struggled to get its own Tim Hortons.

“The community often will say, ‘Look, everyone else has Timmy’s, why don’t we?’ ” says McKinley. “It’s been an ongoing thing for five or six years in the community, as far as trying to get new business into the town.”

McKinley believes attracting Amazon might be enough to bring in a Tim Hortons as well.

“Maybe the Amazon would have a Tim Hortons for its staff and the community inside the building.”

As for infrastructure, Lac La Biche has that covered.

“With an airport in our community, major highways, a rail yard … we have all your distribution needs covered,” writes McKinley. 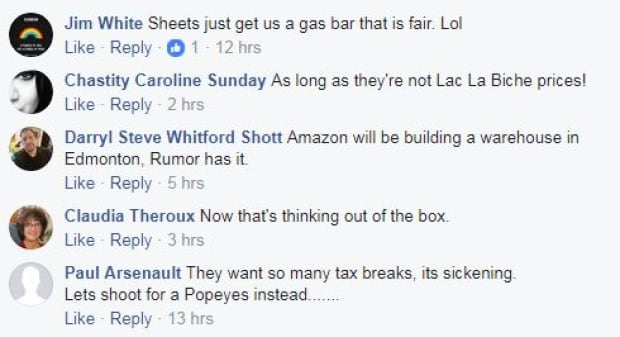 Never mind Amazon, some Lac La Biche residents would settle for a simple gas bar or a Popeyes restaurant. (Facebook)

McKinley says while the proposal is a joke, it does serve another purpose.

“Clearly it was written as more in jest than anything else, but it gives us a little bit of promotion,” he says. “It’s a little bit of a shot in the arm, a little boost to say, ‘Look, we have this much potential, this much opportunity for economic development.’ “

Reaction on Facebook seems to suggest that McKinley has set his sights too high.

One person just wants a gas bar. Another thinks they should shoot for a Popeyes fast-food restaurant instead.