A Vancouver Park Board commissioner wants to see Siwash Rock renamed, saying the Stanley Park landmark has had its “derogatory” title long enough.

“The history of Stanley Park includes acts of dispossession and disrespect directed toward the Indigenous people who inhabited it,” she wrote.

“An ongoing symbol of disrespect is the name Siwash Rock.”

The sea stack, located between Third Beach and the Lions Gate Bridge, is named Slhx̱í7lsh in the Squamish language.

Sea stacks are blocks of erosion-resistant rock isolated from the land by sea that began as part of a headland or sea cliff that were later eroded by waves.

Khelsilem, a lecturer at Simon Fraser University, said the landmark is a major point of history and teachings for the Squamish, Musqueam and Tsleil-Waututh people.

“Slhx̱i7lsh refers to ‘something standing’, ‘standing one’ or ‘standing person.’ It comes from a legend about a man who was transformed into the rock by supernatural beings, teaching people on earth how to be good,” he explained.

Several men stand along Siwash Rock around the year 1918. Decades ago, the rock was named “Siwash,” the Chinook jargon word for a person of First Nations heritage. (City of Vancouver Archives)

Khelsilem said the word Siwash comes from the Chinook jargon, a trade language used at Hudson’s Bay ports between Oregon and Alaska decades ago. It’s a mixture of the Chinook language, English, French, Salish and several other languages.

“In that language, the word for a Native person is Siwash — that’s what you would call a Native person. And the word Siwash is derived from the French word “sauvage,” which translates to “savage” in English,” he said.

“So, it was called Siwash Rock because it was a Native person … that’s the origin of the history and the language.”

For about a 100-year period, he said, the word was used by Indigenous and non-Indigenous people and was “ubiquitous with the northwest coast.”

But now, Khelsilem said, the name is due for change.

“A lot of our communities know of the story of Siwash Rock and recognize it as a place of historical significance and sacredness,” he said. “Names on the landscape should reflect the ancient history and the long, meaningful history. It’s really important and really valuable and it’s exciting to see it happen more and more.”

Vancouver City Coun. Andrea Reimer included the sea stack in her own motion, filed earlier this year, calling for several spots in the city to be renamed in order to advance reconciliation.

Evans said she’s filed her own motion for several reasons: the rock is in the park board’s jurisdiction, rather than the city’s, and her specific motion could be “a quicker and easier win.”

The commissioner said the renaming process will be passed to the Stanley Park Intergovernmental Working Group, should the motion pass at the park board meeting Monday.

The committee would either direct the park board about how to proceed with the change or start the process themselves. Each of the three First Nations in Vancouver — Squamish, Musqueam, Tsleil-Waututh — has representation in the group. 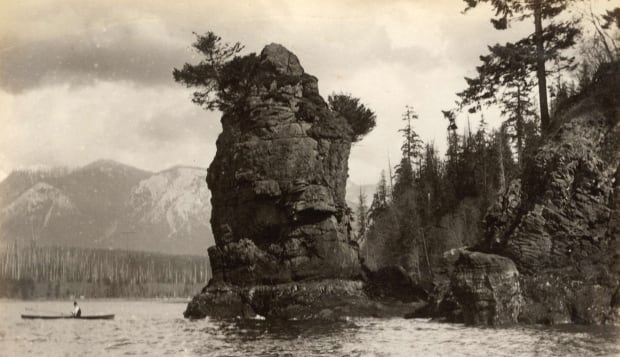 Taken in 1889 or 1890, this photo shows a man in a canoe paddling past Siwash Rock. The City of Vancouver says the picture is part of an album originally owned by ‘pioneers,’ donated to the archives in 2008. (City of Vancouver Archives)

“It would be a further act of colonialism to rename it myself or ask the park board to rename it,” Evans said.

“I think that when we have the opportunity and the right mechanism to correct a historical wrong, we should do that,” she said. “And I think we have that now.”

She added: “naming is an issue of power. We shouldn’t have a name for any part of our land that is derogatory to the Indigenous people of this land.”