Perched on the roof of his grandparents’ house in the hurricane-ravaged Puerto Rican city of Guaynabo, Luis Sanchez-Longo, 21, finally found a cell signal on Sunday to call his worried mother Iara Rodriguez in Florida.

Hurricane Maria decimated much of the island last week, making it look like it had been bombed, her son told her.

“It was like Hiroshima,” Sanchez-Longo told his mother, who said in an interview that she had tried to reach him for days.

Sanchez-Longo was out of cash and gasoline. His grandmother needed a fan to cool herself without air conditioning. The rest of the household — his siblings and step-grandfather — needed more water, more food and more batteries.

“Where is the marines? Where is the air force?” Rodriguez asked. “We’re Puerto Ricans. We’re born American citizens. And we need help.”

Iara Rodriguez, centre, is lying on family members in a portrait taken at her parents’ home in Guaynabo, Puerto Rico. While Rodriguez lives in Florida and escaped the devastation of Hurricane Maria, most of her family remained at the San Juan house. (Courtesy Iara Rodriguez)

Most of the 3.4 million American citizens on the island remain entirely without power, as the federal government fends off criticisms that its response to the humanitarian crisis has been slow and inadequate, particularly when compared to recent relief efforts on the U.S. mainland in Texas and Florida.

Reached by cellphone in the capital of San Juan on Tuesday, Andres Lopez, 46, said the devastation was “apocalyptic.” Together with his wife and two children, they were depleting their stockpile of bottled water. Thirsty rural residents were reportedly drinking from streams, risking illness.

“We’re husbanding resources. We still have some bottled water, but we’re now going on day six or seven,” Lopez said. “If this level of scarcity extends for one week or two weeks, it’s going to be unbearable for everyone.”

Life on the island, he said, has become about survival and waiting. There are hours-long waits at gas stations, ATMs, pharmacies and bakeries. Waits for the re-establishment of vital telecom services to restore communications to the world. It could take six months for power to return in some rural areas.

“And now we’re waiting to be treated equally as our fellow Americans who suffered in Texas with Hurricane Harvey, or Florida with Hurricane Irma,” Lopez said. “There just doesn’t seem to be the same equal level of concern.” 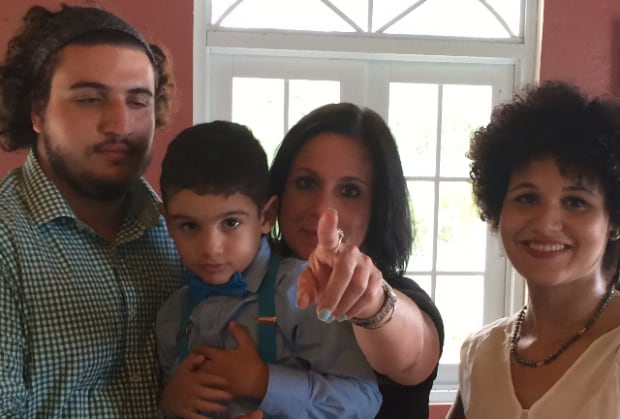 Luis Sanchez-Longo, left, is a 21-year-old student at the University of Puerto Rico. (Iara Rodriguez)

U.S. President Donald Trump announced he will tour the U.S. territory on Tuesday, and also stop over at the U.S. Virgin Islands. In the White House’s Rose Garden, he boasted: “Everybody has said it’s amazing, the job that we’ve done in Puerto Rico.”

Clearly not everybody feels the same.

Puerto Rico has already been buckling under the weight of financial strain. 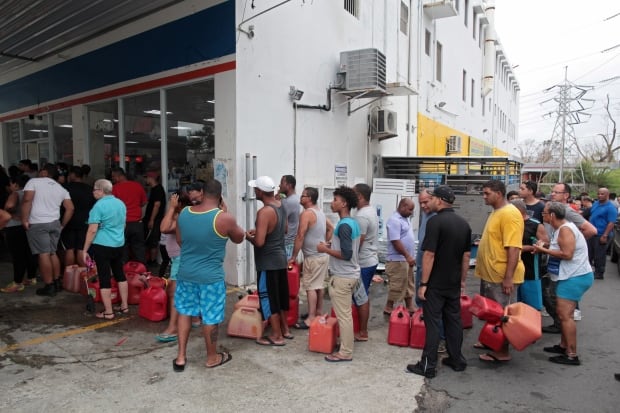 People in San Juan, Puerto Rico, line up to buy gasoline at a gas station after the area was hit by Hurricane Maria on Sept. 22. (Alvin Baez/Reuters)

While Trump tweeted that Texas and Florida were “doing great” after federal help, he wrote that Puerto Rico was in “deep trouble” following Maria. Trump added that “billions of dollars owed to Wall Street and the banks” would, “sadly,” still have to “be dealt with.”

“That was the most insensitive, horrible thing. It’s like if you have had a cousin who gets cancer and your reaction is ‘Well, he just declared bankruptcy, so he might as well die.'”

When Lopez learned about the tweets, he thought, “We don’t need him on the ground here if the version of the president that’s going to show up is the one that tweeted those awful unmentionables.”

Dire as his situation has become, Lopez is among the lucky few with a reliable phone signal. Although the U.S. Federal Communications Commission confirmed more than 90 per cent of cell towers are down in Puerto Rico, it was by an accident of geography that Lopez lives in a pocket of the suburb of Miramar that still has service. He has been charging his phone with his car cigarette lighter. 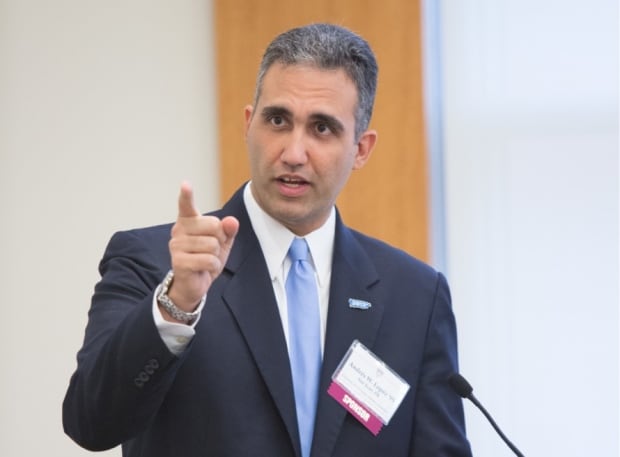 Andres Lopez, a lawyer living in San Juan, says his family has stockpiles of food and water for now, but ‘we’re waiting to be treated equally as our fellow Americans who suffered in Texas with Hurricane Harvey, or Florida with Hurricane Irma.’ (Andres Lopez)

Trump said Tuesday “top people” from the Federal Emergency Management Agency (FEMA) had been on the ground passing out “massive loads of water and food and supplies” on an hourly basis.

He told reporters that, unlike the logistics of sending quick aid to Florida and Texas after recent disasters there, reaching Puerto Rico was “tough stuff” because it’s an island that can’t simply receive truck deliveries.

“This is a thing called the Atlantic Ocean,” Trump said.

Former FEMA director James Lee Witt dealt with a similar circumstance after 1995’s Hurricane Marilyn slammed into the Virgin Islands while he was running the agency during the Clinton administration.

“It took us a few days to get C-17s and C-130s there after the airport was blown apart, the control tower was gone and you had to get it all set up,” Witt said. “Puerto Rico’s an island, so everything has to be brought in by air or ship, so it does take longer.” 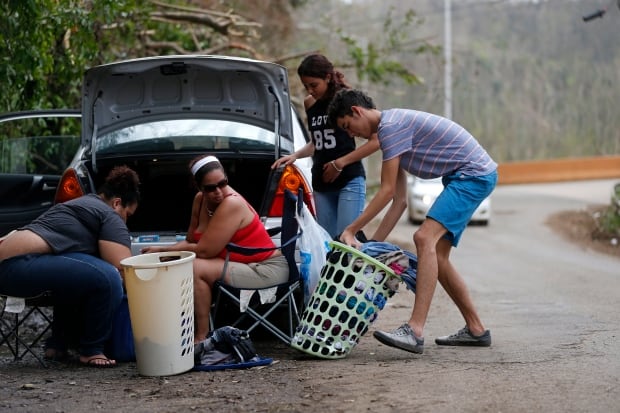 A family washes clothes on the side of the road, utilizing water running off the mountain in Montebello, Puerto Rico, in the aftermath of Hurricane Maria, on Tuesday. Many of the more than 3.4 million U.S. citizens in the territory are still without adequate food, water and fuel. (Gerald Herbert/Associated Press)

“If you’re a victim in a situation like that, an hour or two hours in a day feels like an eternity,” Witt added.

Jacob Remes, a disaster historian at Columbia University in New York, countered that waiving a century-old law restricting ship access could at least alleviate aid delivery concerns. The so-called Jones Act favouring U.S. ship-building decrees that only U.S.-flagged ships crewed by Americans can bring supplies from one American port to another. Economists argue the law is stifling Puerto Rico’s recovery.

On Monday, the White House said it would not waive the restrictions for Puerto Rico, as it had following Harvey and Irma.

As for Puerto Rico’s island geography being a challenge, Remes pointed to the American response to the 2010 Haiti earthquake. Though not a model for disaster response, he said, “it’s clear when the U.S. wants to mobilize to do things logistically that are far away, we manage.”

To Lopez, still awaiting more aid in San Juan, it doesn’t feel like urgency is driving the federal government. Puerto Rico’s population is larger than Iowa’s 3.1 million, yet he senses that the island’s colonial history somehow paints Puerto Ricans as second-class citizens. 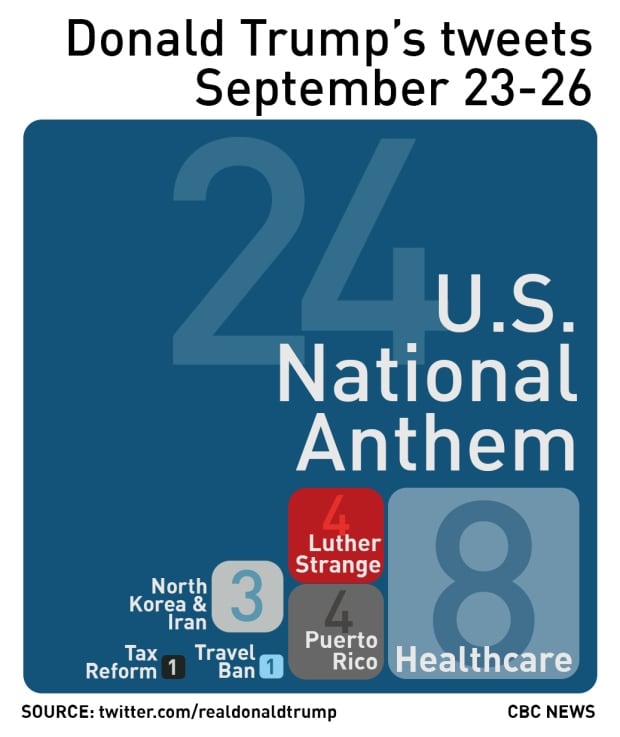 Donald Trump tweeted about Tuesday’s Republican primary in Alabama as much as U.S. territory Puerto Rico in recent days, with tweets about the protests during the national anthem dwarfing all other subjects. (CBC)

“We need a lot, but what we need more than anything else right now is calls to Congress and pressure to bear on them,” he said. “Because right now, this doesn’t feel like a first-class response.”