Hawaii’s land board on Thursday granted a construction permit for a giant telescope on a mountain that Native Hawaiians consider sacred, a project that has divided the state.

The $1.4 billion Thirty Meter Telescope (TMT) has pitted people who say the instrument will provide educational and economic opportunities against those who say it will desecrate the state’s tallest mountain, called Mauna Kea.

Plans for what would be one of the world’s largest telescopes date to 2009, when scientists selected Mauna Kea after a five-year around-the-world campaign to find the ideal site for what telescope officials say “will likely revolutionize our understanding of the universe.”

The project won a series of approvals from Hawaii, including a permit to build on conservation land in 2011. Protesters blocked attempts to start construction. Then in 2015, the state Supreme Court invalidated the permit and ordered the project to undergo the process all over again.

Pursuing the telescope has taken more than 10 years, Douglas Ing, an attorney representing the telescope project, told the land board during final arguments on Sept. 20. “Enormous resources” were spent and community meetings were held, he said.

‘You failed up there’

Paul Neves, a master hula teacher and opponent, said the non-profit building the telescope is made up of outsiders and that there has been too much development on Mauna Kea, where there are 13 telescopes.

Protests disrupted a groundbreaking in 2014 and intensified after that. Construction stopped in 2015 after 31 demonstrators were arrested for blocking the work.

A second attempt to restart construction a few months later ended with more arrests and crews retreating when they encountered large boulders in the road.

‘We will determine what places are sacred and how they should be protected.’ – Kahookahi Kanuha, TMT opponent

Mehana Kihoi said being arrested while in prayer on the mountain was one of the most traumatic experiences of her life. She started going there to help heal from domestic violence, Kihoi told the land board.

“For years, I carried grief and pain … until I went to the mauna,” she said, using the Hawaiian word for mountain.

Some say fighting the telescope has awakened a new generation of Hawaiian activism.

“We will determine what places are sacred and how they should be protected,” Kahookahi Kanuha told the board.

In this April 2, 2015, file photo, Department of Land and Natural Resources officers arrest a Thirty Meter Telescope protester at the telescope building site on the summit of Mauna Kea in Hilo, Hawaii. (Hollyn Johnson/Hawaii Tribune-Herald via AP)

Kanuha dismissed the millions that telescope officials have paid toward educating youth on the Big Island in science, technology, engineering and math. So far, $3.5 million has been paid into the educational fund, even while the project’s construction permit was invalid.

That money isn’t the answer to improving the lives of Native Hawaiian youth, Kanuha said. Revitalization of language and culture through Hawaiian-focused education is what’s important, he said.

“It’s not saying that we need TMT to survive,” he said.

Some who support the project said they’re afraid to do so publicly.

A group of Native Hawaiian telescope supporters formed a group called Perpetuating Unique Educational Opportunities. Some members had been against the telescope in the past, said the group’s attorney, Lincoln Ashida.

“We believe that with increased opportunities for children, that results in stronger families, which in turn benefits our community,” Ashida told the board.

He added that the group wants the telescope to be developed in a way that’s sensitive to Hawaiian culture. 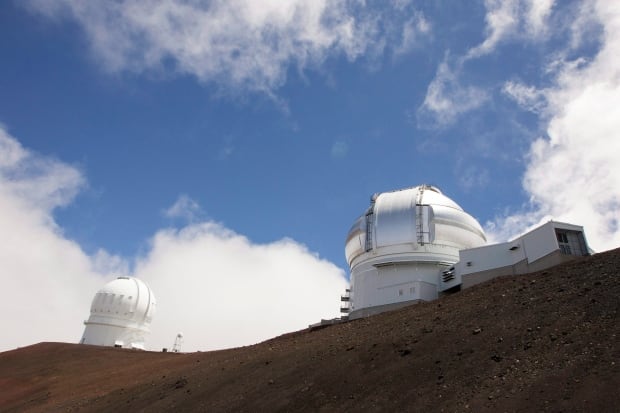 Telescope officials have said they plan to build in Spain’s Canary Islands if they can’t build in Hawaii. The non-profit international partnership wants to resume construction next year.

A group of universities in California and Canada make up the telescope company, along with partners from China, India and Japan. Its primary mirror would measure 30 metres in diameter and be made up of 492 individual segments. Compared with the largest existing visible-light telescope in the world, it would be three times as wide, with nine times more area.

Mauna Kea, a dormant volcano, has been the first choice, telescope officials said, calling it the best location in the world for astronomy. Its summit provides a clear view of the sky for 300 days a year, with little air and light pollution.

The telescope’s board of directors held public meetings before selecting Mauna Kea in 2009. Two years later, opponents requested so-called contested-case hearings before the land board, which approved the construction permit.

Opponents then sued. In 2015, the state Supreme Court revoked the permit, ruling the board’s approval process was flawed. That meant the application process needed to be redone, requiring a new hearing.

After 44 days of testimony, the retired judge overseeing the hearing recommended granting the permit, with conditions that employees attend mandatory cultural and natural resources training and that employment opportunities be filled locally “to the greatest extent possible.”