The way three inukshuks displayed outside Toronto’s Pearson International Airport are structured has angered some Inuit.

The pieces, outside Terminal 1, were purchased by the federal government for installation at the airport in 1963. They were built by Kiakshuk, an elder from Cape Dorset, Nunavut, and member of the West Baffin Eskimo Co-operative.

At some point, the works were disassembled and transferred into storage, then they were reassembled.

But some say the configurations are disrespectful to Inuit culture.

A CBC Nunavut Facebook post of the photos drew dozens of comments, with many pointing out the structures do not resemble traditional inukshuks.

An important symbol in the North — and one that adorns the Nunavut flag — inukshuks can have many meanings, from symbols of hope and friendship to literal and spiritual guideposts. But they can also indicate an area that should not be approached or touched.

One inukshuk in Toronto especially upset Piita Irniq, who has built several of the symbolic structures across North America and served as a commissioner of Nunavut.

Irniq says he believes either the artist was given specific instructions to create inukshuks with arms and legs or the inukshuks might have been reassembled incorrectly.

Officially titled Three Inussuks, the work is not accompanied by any description of its meaning. (Submitted by Elaine Prusky)

He says places marked with inukshuks with raised arms were very rare and designated as dangerous places to be avoided. He says Inuit should be involved in rebuilding the pieces or they should be taken down.

Robin Smith, communications adviser with the Greater Toronto Airports Authority, said he would like to see that happen, especially because before now, the airport was unaware people were unhappy with the structures.

Old photographs show that despite being reassembled, the inukshuks look much the same.

The inukshuks have been in their current location on the curb outside the Terminal 1 departures entrance since 2002. 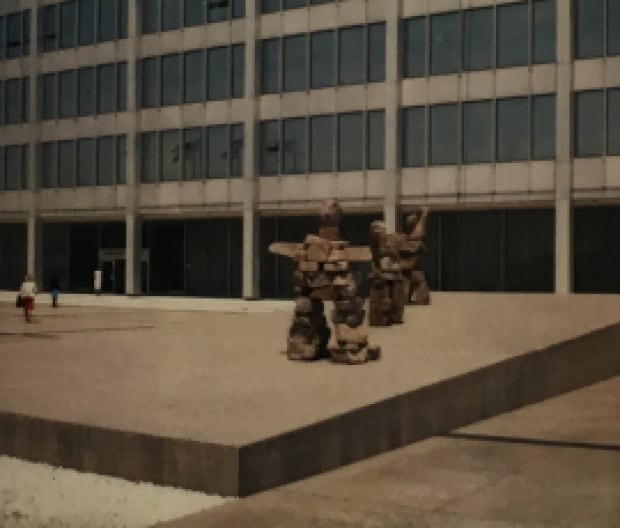 A Polaroid of the Three Inussuks in their original form taken for the airport’s fine art catalogue in 1985. (Greater Toronto Airports Authority)

Officially titled Three Inussuks, the work is not accompanied by any description of its meaning.

Irniq said he and Peter Katorka built an inukshuk for the Ottawa airport that is more pyramid-shaped with a peep-hole in the middle, which traditionally meant if someone looks through, they will be pointed in the direction of good hunting or fishing areas.

He said he believes this traditional meaning makes sense for an airport.

Smith said Toronto Pearson is like a front door to Canada for many people, so the airport wants to rectify the issue.

“We are very grateful to the people that have brought it to our attention, because we are in a unique position to represent Canada and we want … to make sure we can represent Inuit culture in the best possible way.”

He said a team has already reached out to Irniq to develop a plan to improve the presentation of the artwork.

Or, as Helen Annie Angnetsiak said, they “may be signifying that Toronto Maple Leafs are dead?” 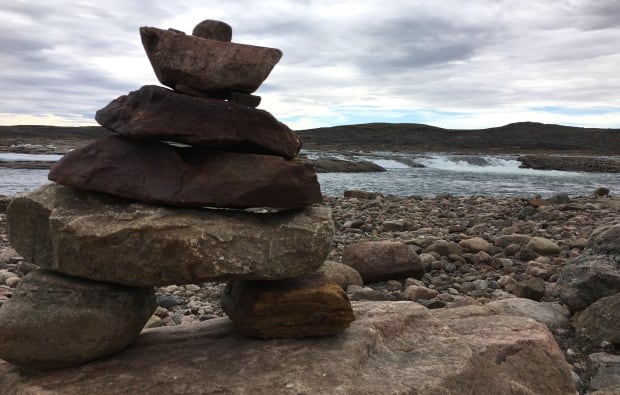 An inukshuk stands outside in Iqaluit, Nunavut. (Nick Murray/CBC)