As momentum builds to tear down monuments and rename buildings that are deemed racist relics of the past, some historians say offensive memorials should remain intact to deepen education and even bridge divides.

Hundreds of statues remain across the U.S. in the wake of the Civil War, marking military figures or battle sites, and there is a growing push to remove what many regard as lingering symbols that glorify slavery and the oppression of black Americans.

Similar disputes have erupted In Canada over commemorative names and statues of historic figures who had a role in the cultural oppression of Indigenous peoples.

The trend to remove those memorials — many of which are displayed in prominent public places featuring figures in heroic poses, such as riding on horseback — has provoked strong emotions and violent clashes.

But leading historian and author Jack Granatstein said that rather than allowing these sites to become flashpoints for racial divisions, they should be displayed with contextual information to help people understand, interpret and learn from the past.

“It’s probably inflaming the situation,” Granatstein said of the push to eliminate memorials. “I think we need to remember that history happened, and you don’t simply change it by taking a name off a building or taking down a statue.

“I think what is better than that is to have an explanation for why someone is being honoured for what he or she did in that time, and that explanation can go in to context of what they did.”

Granatstein said taking down monuments allows the wrong people to seize control over the interpretation of history, referring to those who have staged demonstrations protesting their removal, including white supremacists.

“In the American context and to some extent the Canadian context, you give an opportunity to people whose views we don’t particularly enjoy: fascists, Nazis, racists,” he said. “I don’t want them pretending to defend history. The history they are trying to create is not the history I would prefer to see memorialized, or honoured or understood by the public.”

White nationalists protesting the planned removal of a statue memorializing Robert E. Lee, a Confederate top general, clashed violently with counter-demonstrators in Charlottesville, Va., last weekend. One woman was killed and another 20 people were injured.

It was the latest in a growing number of controversies that have erupted over plans to take down Confederate symbols in the U.S. and to change names of sites offensive to Indigenous people in Canada.

With a growing push to remove historical memorials and monikers, Granatstein asked where it would stop.

He noted that in Canada, CBC listeners called Tommy Douglas the greatest Canadian of all time, yet in the 1930s the former premier of Saskatchewan and father of medicare held a then popular belief in eugenics and wanted to sterilize people with mental impairments.

“Attitudes change, and it seems to me that one of the tasks of historians and politicians is to remind people that today’s values are different than past values, and the future’s values will probably be different than ours,” Granatstein said.

Ron Stagg, a history professor at Toronto’s Ryerson University, said removing statues of Confederate heroes, which are now interpreted as symbols of slavery and oppression, draws the ire of a certain segment of the white population who see it as an erosion of their rights. Provocative statements from U.S. President Donald Trump have served to embolden these people, who may not have spoken out in the past.

Stagg sees the situation unfolding in the U.S. as different from that in Canada, where most disputes are not fraught with such deep divisions and “intense feelings” on both sides.

A statue of Edward Cornwallis stands facing England – with his back to Halifax – in Cornwallis Park. (Canadian Press)

In Canada, most of the controversies have been around Indigenous people in the context of reconciliation.

Conflict recently erupted in Nova Scotia over a plan to take down a statue of Edward Cornwallis, a British military officer and one of the founders of Halifax, who in his day had offered a bounty for the scalps of Mi’kmaq.

The federal government also recently removed the name of Hector Langevin from a government building, after Indigenous groups complained that it paid tribute to a man who played a role in the residential schools program.

Stagg called that name removal a “token” gesture by Prime Minister Justin Trudeau, and said it may open the floodgates to other requests for change. 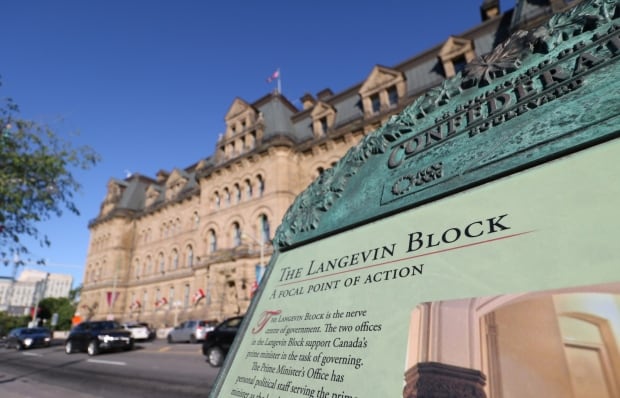 The Langevin Block in Ottawa is seen on June 21, 2017 — the same day that Prime Minister Justin Trudeau announced it would be renamed because Hector-Louis Langevin, a father of Confederation, proposed the creation of the residential school system. (Trevor Pritchard/CBC)

“I think we’re going to try and be politically correct in terms of trying to erase aspects of the past that we find offensive,” he said. “I think that’s wrong in the broad sense. I think it’s going to continue to happen and there’s going to be a backlash just as there has been in the States.”

Indigenous child welfare advocate Cindy Blackstock has successfully fought for revised wording on plaques commemorating certain people who had a role in the residential schools program. She said while in some cases symbols such as swastikas must be eliminated, she said most memorials should remain up in order to teach visitors about the past, provided they tell the full story.

“By erasing the monument you can erase the historical lessons, contributing even more to the rampant historical amnesia that feeds discrimination and immorality,” said Blackstock, who is also a professor of social work at McGill University.

Donna Gabaccia, a history professor at the University of Toronto who organized a weekend demonstration in Toronto to protest white nationalism and the violence in Charlottesville, said memorials could be taken down and moved to museums where they could be understood in proper context.

“I see museums as important mediators of cultural controversies, where many voices can be and must be heard if the controversies are to be resolved,” she said. “Monuments become controversial when public opinion and historical context changes around them, which is inevitable. Contestation over the meaning of museums can only be resolved when all sides begin to understand the differences between the past that created the monuments and the present that inevitably seeks new meaning in them.”

Granatstein said context about the people being memorialized — including polarizing figures deemed by some to have been heroes in their day — is critical to understanding history. 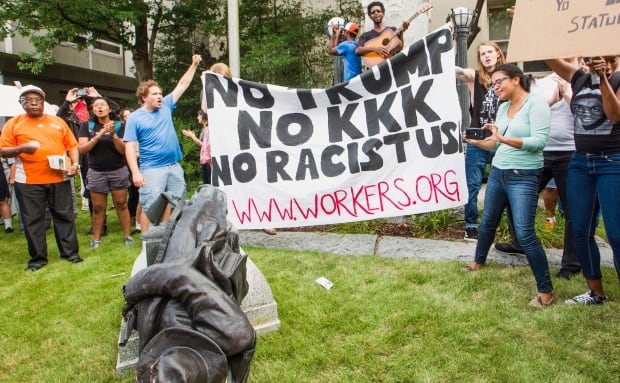 Protesters celebrate after toppling a statue of a Confederate solder in Durham, N.C. Monday, Aug. 14, 2017. The crowd gathered to protest the violence in Charlottesville, Va., following a march by white supremacists on Saturday. Activists on Monday evening used a rope to pull down the monument outside a Durham courthouse. (Casey Toth/The News & Observer/Associated Press)