A well-know economic theory says that when it comes to people, you can get too much of a good thing.

As thousands of asylum seekers come across the Canadian border to escape Trump’s America, there are many Canadian voices, including mainstream Conservatives, who believe we may have reached that point.

A glance at internet comments and letters to the editor shows that some Canadians are reacting emotionally to media reports on the influx of new arrivals. But what about the economics?

In the economic principle sometimes called the law of diminishing returns, there is a text book example which describes an increasing number of workers coming to help dig in a garden of limited size.

One or two pairs of extra hands make the garden more productive, but as the number increases, the benefit falls, until, at extremes, there are so many people they are stomping on the plants and productivity collapses.

In Canada where is that point?

Boys wear shirts calling for their parents not to be deported from the United States during a rally by immigration activists in Washington, D.C. on Aug. 15. (Joshua Roberts/Reuters)

“The realistic part is we don’t know. We absolutely do not have the magic number,” says Bessma Momani, senior fellow at the Centre for International Governance Innovation (CIGI) in Waterloo, Ont.

While Canada continues to admit hundreds of thousands of new permanent residents every year, some as refugees and many more through the official points-based immigration system, the country also has a long history of being wary of new arrivals.

In the 1800s, Irish immigrants were seen as stealing jobs from earlier immigrants. As we’ve heard in recent debates over honouring political leaders of the past, Prime Minister Mackenzie King turned back Jewish refugees, many of whom died later in Nazi concentration camps.

According to modern refugee laws, that could not happen now, because Canada is committed to an agreement that requires countries to accept valid refugees who appear at their border.

Theoretically, if all the world’s suffering people arrived on Canada’s doorstep they would overwhelm the country’s relatively small economy, and, like the workers stomping on plants, damage the economy.

In the 1970s that was called the lifeboat theory, where rescuing too many people would cause the boat to sink.

But it hasn’t happened yet. Refugees have to get to the border first, and as people seeking asylum from the United States may find, the qualifications for refugee status are quite strict.

Even if the number of refugees were to swell, the government could limit the number of people admitted under other categories to reach an optimum level, says Christina Clark-Kazak, professor of international affairs at the University of Ottawa.

“The government clearly does that on the basis of a model that they think optimal for Canada given the economy and the times,” says Clark-Kazak. 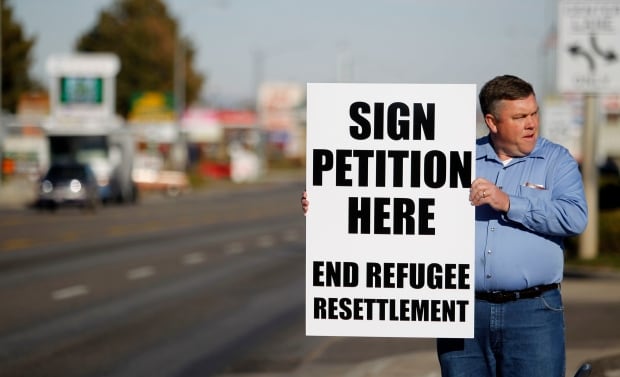 The limits to immigration in North America are thought to be political, not economic. A study on the Mariel Boatlift on the Miami labour market found increased immigration had no real impact on the city’s wage and employment rates. (Drew Nash/Reuters)

There is a potential that admitting too many people, especially of one national group, could create a poor underclass as people get trapped in a cultural ghetto of generational underachievement. Clark-Kazak says that has happened in a few distinct communities, but it is an exception.

Evidence shows immigrants don’t eat a piece of a limited pie. They make the pie bigger.

“The first generation may struggle, but what Statistics Canada has actually shown is that the children of immigrants do very well and that’s across the immigrant categories,” says Clark-Kazak.

“One would expect the children of highly skilled workers to do well, but actually the children of refugees also are more likely, for example, go to university than Canadian-born,” she says.

Of course such a system would likely break down if, as in some Middle Eastern countries, the refugee population were bigger than that of the original host country, but studies around the world have shown that more moderate, but still high, levels of immigration are consistent with economic success. Others show immigration has no net effect.

Half a million a year

“There have been many many studies that show when it comes to Canada we could absorb, easily, 500,000 immigrants a year,” says CIGI’s Bessma Momani, co-author of the book Diversity Dividend: Canada’s Global Advantage. That half million economic capacity compares to the current intake of between 200,000 and 300,000.

But Momani says that besides adding absolute numbers, immigration stimulates an economy in innumerable ways.

It adds creativity in the workplace as people bring broader cultural perspectives.

As a counter-example she points to the automatic soap dispenser that would only work for white skin, something that would not have happened to a diverse development team.

By exposing Canadians to global cultures, immigration makes international business seem more accessible. It offers access to those businesses through the language skills of immigrants.

Previous immigrant groups including the Vietnamese boat people and the Ismaili people pushed out of Uganda have been some of Canada’s entrepreneurial stars.

Momani says that while there are clearly economic limits to the number of people Canada can absorb, all the benefits of immigration have repeatedly shown that we are well below those levels.

The issue, she says, is not economics. It is the kind of backlash we’ve seen in Europe and the United States where people reach a point where they decide that they are being culturally overwhelmed.

“The reality is, it’s really about how much the political system can take,” Momani says.