A new art project will tell the stories of Edmonton’s diverse communities on the walls of LRT stations.

As one of the city’s Canada 150 legacy projects, the goal of Paint the Rails is to delve into Edmonton’s historical milestones, said Maigan van der Giessen of the John Humphrey Centre for Peace and Human Rights, who is the creative lead.

“It’s sort of weaving all those together and say, ‘Let’s tell the real story of us, not just the story we’d like everyone to know.’ ”

Established local artists AJA Louden and Carla Rae Taylor will be doing the painting, with help from some emerging talent. They’ll begin with the Churchill and Coliseum stations this fall.

They’ll be getting their inspiration from the stories they’re hearing in public consultation sessions composed of cross-cultural subsects of the city’s population.

‘A big part of the focus is acknowledging again some of those stories that are often underrepresented.’ – AJA Louden

“A big part of the focus is acknowledging again some of those stories that are often underrepresented,” said Louden on Monday night during a public consultation session at the Parkdale Cromdale Community League.

“I think one of the challenges for me as an artist is really going to be finding a way to boil it down and see what kind of connects and unites us all.”

Louden said he’s heard stories about the Black farmers who came to Alberta via the Underground Railroad to settle in Amber Valley.

He’s learned about the significance of the Al-Rashid Mosque in north Edmonton, which was the first to be built anywhere in Canada in 1938.

And he’s been exposed to local Indigenous narratives that have not always been included in the mainstream version of how the area was settled.

“I think we often celebrate some of the settler stories, and that’s a big part of our history,” Louden said. “But I think there’s a lot of stories that are less told that really form a huge part of our identity as a country.”

A sense of belonging

Edmonton’s Grandin LRT station has long had a controversial mural that features Vital Grandin, the first Roman Catholic bishop of St. Albert, with a nun who is holding an Indigenous child.

The artist of that mural, Sylvie Nadeau, said she was unaware of the painful legacy of residential schools at the time.

In 2014, she worked with Indigenous artist Aaron Paquette, to bookend her original installation with new paintings featuring strong, Indigenous youth.

Paquette contributed murals with images like the white buffalo to symbolize knowledge, peace and hope.

“We are looking to dig into a different narrative and maybe a different way of telling our story,” said van der Giessen, noting she’s heard a lot about the relationship with the land, which is an important element of Indigenous spirituality. 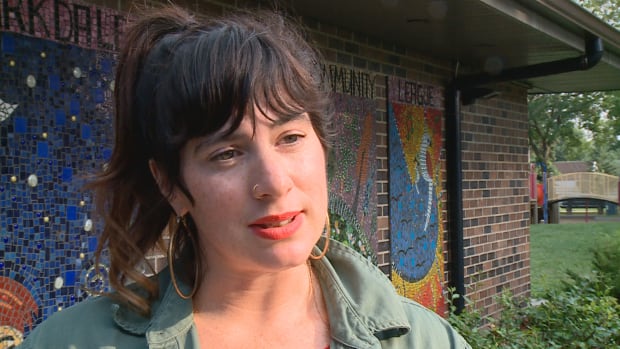 Maigan van der Giessen, of the John Humphrey Centre for Peace and Human Rights, is the creative lead on the Paint the Rails Reconciliation Project. (Roberta Bell/CBC )

“We’ve been hearing a lot about belonging. What does it mean to call this place your home or to feel it’s your home? Some people do feel it’s their home and some people don’t,” she said.

“How can we transform LRT stations into places that people feel that they belong?”

The project has two other major components: a documentary film that will be based around the stories coming out in the public consultation sessions and a children’s book that will features the artwork.