Four-minute fascism, an infringement on free speech, an efficient shutdown of hate rhetoric.

Whatever you want to call it, the barely-there press conference convened on Sunday by white nationalist Jason Kessler in front of city hall in Charlottesville, Va., was exactly as Katie Larimer hoped it would be: brief.

“Three minutes! It took three minutes … to drown him out,” she said as Kessler, the radical ringleader behind last weekend’s deadly “Unite the Right” rally, bolted through a yard, trailed by raised middle-fingers and cries of “Go home, Nazi!”

“Murderer!” others shouted, referring to the death of a counter-protester killed a day earlier, after a car driven by a suspected far-right demonstrator rammed it into a crowd.

Larimer checked her watch: by 2:03 p.m. Kessler had scurried away as a crush of people screamed profanities at him and blasted air horns and trombones. Kessler arrived just before his speech, scheduled for 2 p.m., but he never properly started. One woman tackled him; a man reportedly punched him in the face.

Wow. Jason Kessler, organizer of “Unite the Right,” flees as #Charlottesville anti-racism activists shout him down at the downtown mall pic.twitter.com/xRTWRjJVMb

“He just moved to another location and he’s going to try to spread his hatred over there,” Larimer said. “We’re gonna keep drowning him out as long as he tries to speak.”

A pair of snipers perched on a rooftop looked on as Larimer followed the anti-racism activists further west of the building. A camera drone buzzed overhead.

Rally organizer Jason Kessler held a press conference that quickly turned to mayhem Sunday outside city hall in Charlottesville, Va. The previous day, a woman was killed and several others injured in violence spurred by Kessler’s demonstration. (Andrew Shurtleff, The Daily Progress/Associated Press)

“But he does not — does not,” she stressed, “reflect the values of Charlottesville.”

The strong repudiation was widely shared by Charlottesville residents after Kessler’s rally transformed the city into a flashpoint for white nationalism. The event drew hundreds of people, including a mix of neo-Nazis, bikers, Ku Klux Klan members, white supremacists and anti-immigrant activists with the racist fringe “alt-right” movement, taking a violent turn that compelled the governor of Virginia to declare a state of emergency. 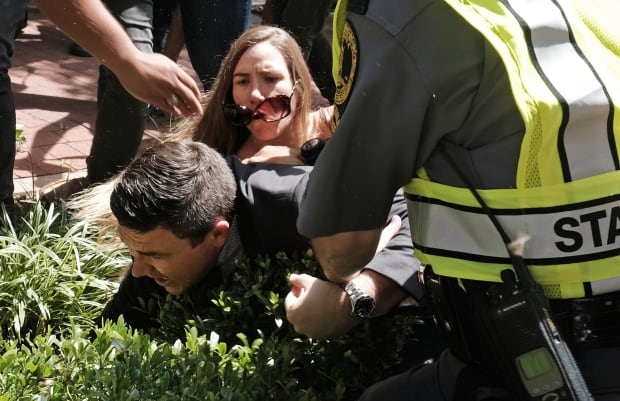 Jason Kessler is helped by police after he was tackled by a woman during a press conference on Sunday. (Justin Ide/Reuters)

Larry Sabato, the director of the University of Virginia’s Center for Politics, lamented that in his 47 years with the college, he had never been so sickened as he was when torch-bearing white nationalists gathered Friday on the grassy courtyard known as the ‘Lawn,’ many chanting the Nazi slogan “Blood and soil.”

“We need an exorcism on the Lawn,” Sabato tweeted.

This college city — known for its vineyards, hiking trails in the Blue Ridge Mountains, Thomas Jefferson’s Monticello plantation and the University of Virginia — was unrecognizable to Evona Tollison. 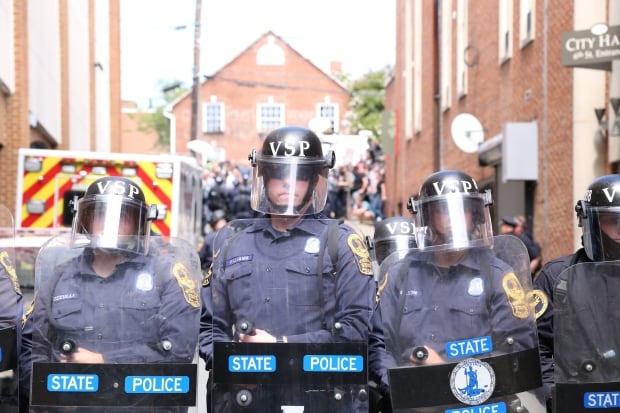 “That’s not the Charlottesville I know,” Tollison said at the historic Downtown Mall, after laying a spring mix of flowers by a makeshift vigil for Heather Heyer, 32, the counter-protester killed in the car attack.

“It was astonishing to have all these folks from out of town influence how folks see us. Don’t confuse Charlottesville with the folks that came and committed violent acts here.”

Ryan Blake, who lives on the street where Heyer was killed, also suspected the majority of the marchers were outsiders.

“When you live in this area, you see the people here, you see the community,” he said. “And I didn’t see people who were part of this community, from both sides. I saw strangers. I saw people I didn’t recognize.” 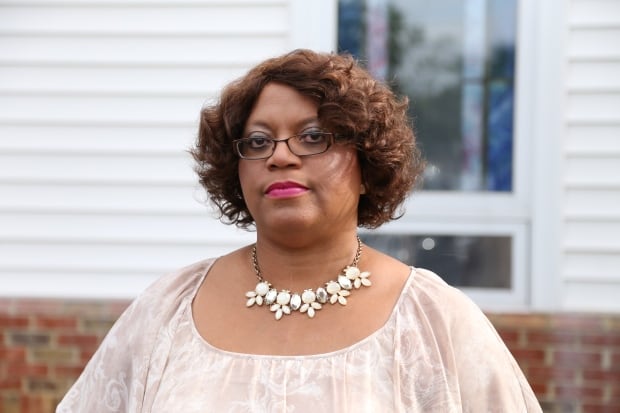 Saturday’s “Unite the Right” demonstration was sparked by outrage about plans to remove a statue of Confederate hero Robert E. Lee from a city park. Not far from that site, a woman shouted at a pair of shirtless protesters proclaiming they were there to “punch Nazis.”

“Get a job!” she yelled. Later, she said she had “no problem with the blacks,” adding, “I have many friends that are blacks” but that she wanted to show up to defend the right to preserve the Lee statue as a symbol of southern heritage.

“I am not racist at all,” she said. “But I do believe that our statues are history.” 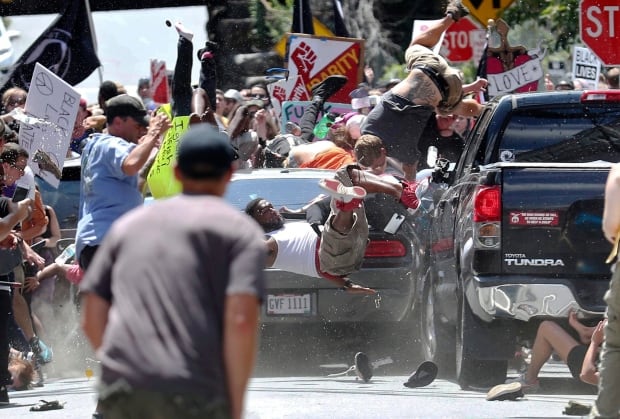 The moment a vehicle is driven into a group of protesters demonstrating against a white nationalist rally in Charlottesville, Va., on Saturday is captured in this photo. (Ryan M. Kelly/The Daily Progress via AP)

A husband and wife taking selfies near the Lee statue on Sunday objected to the city’s plans to rename the park, once known as Lee Park, to Emancipation Park.

“It’s Lee Park to me,” said the man, who did not wish to give his name.

While white anti-racism activists expressed shock at the violent skirmishes in their home town, black residents said they’ve long been living a different reality, one in which racial tensions constantly simmer under the surface. 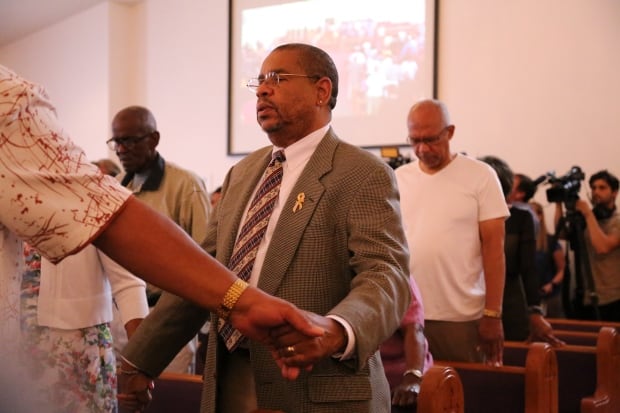 David Edward Simmons, Jr., a member of the congregation at the Mt. Zion First African Baptist Church, clasps hands with other parishioners during a Sunday service. (Matt Kwong/CBC)

“They didn’t come here because of a statue. They came here because, just as [former KKK leader] David Duke said yesterday, they came out to fulfil the promise of President Trump and ‘take their country back.'”

Deborah Anderson, a 52-year-old schoolteacher and member of the congregation, said that seeing protesters wielding clubs reopened wounds for those who remember racial segregation enshrined in law.

“My siblings came up in the years of the Jim Crow era,” she said. “So they were very upset. It regenerated remnants of the past.”

Another member of the congregation, David Simmons, said he was still in “disbelief” that racial hatred and violence would rattle his city as it did. 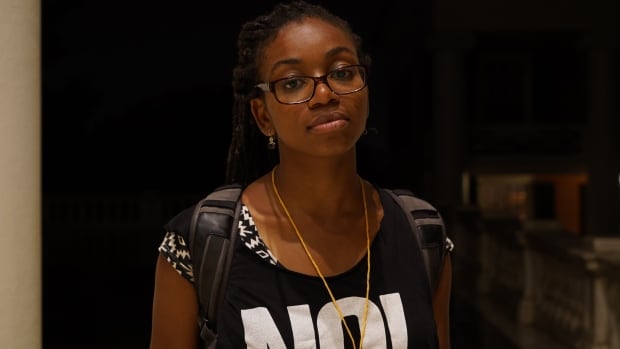 Reneigh Jenkins, a New York-based activist with the group Refuse Fascism, says she was marching with counter-protesterson Saturday when a car plowed into a crowd nearby. “I thought a bomb had gone off,” she said. (Matt Kwong/CBC)

“We remain a city of inclusion,” he said. “We have some issues in the city, but we always try to work through them. I guess we’re not there yet.”

Churchgoers agreed one way the nation could accelerate its healing would be for the president — and not his White House communiques — to directly condemn white supremacy by name, rather than vaguely spreading blame to “many sides.”

While they wait, the fringe right has vowed to return to Charlottesville. In an online video posted Saturday, prominent white nationalist Richard Spencer said the movement would return so often “your head’s going to spin.”

“We are going to make Charlottesville the center of the universe,” he said. 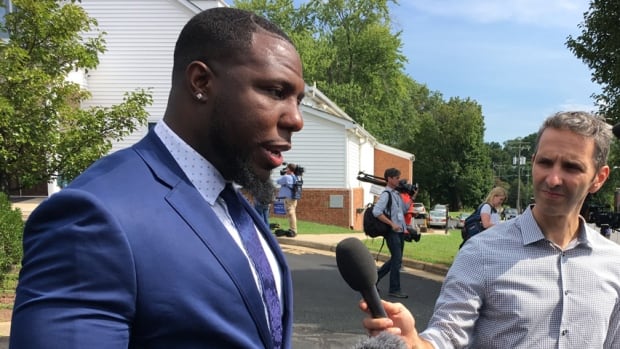