More than a quarter of federal inmates in Canada are Indigenous. And in the Prairie provinces, Indigenous people account for nearly half the federal prison population.

“It just hurts my heart that the majority of these people are my people,” said Rachel Manichoose from Sturgeon Lake Cree Nation Thursday.

Manichoose was in Edmonton meeting with an advocacy group to mark Prisoners’ Justice Day at the Alberta legislature.

Rachel Manichoose joined the 2017 Prisoner Justice Day in Edmonton on behalf of friends that have been incarcerated. (Zoe Todd/CBC)

About two-dozen people joined hands in a round dance to raise awareness about the overrepresentation of Indigenous people in Canadian prisons.

“It’s so much more than dancing in a circle,” Manichoose said.

Through incarcerated friends and family, Manichoose said she has heard stories of mental health crises, drug abuse and death in prison.

“There’s no justice,” she said. “We need to be the voice for them — we need to show them that they matter, too.”

She worked as an institutional elder at the Edmonton Remand Centre for half a decade, until 2013.

“People get out of jail and it’s better to have rehabilitation programming versus punishment models,” she said. 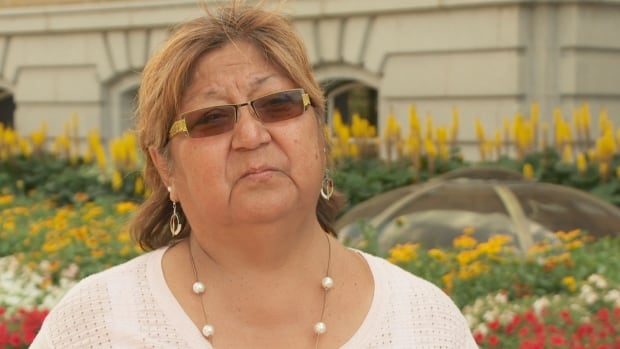 Taz Bouchier worked as an institutional elder at the Edmonton Remand Centre until 2013. (Zoe Todd/CBC)

Including families in the healing process is crucial, she added.

“When someone’s incarcerated, it ripples out like a pond,” Bouchier said.