A scientific expedition in the Gulf of St. Lawrence is revealing never-before seen images of odd and valuable marine life.

Federal researchers have joined with the non-profit group Oceana Canada to use a $6-million robotic submersible, known as ROPOS, to explore the seabed, and live stream sometimes spectacular high-definition video to the internet.

“The Gulf of St. Lawrence has never been explored with the type of technology we have,” Oceana’s science director, Robert Rangeley, said in an interview Monday from Cheticamp, N.S., where the two-ship expedition was poised to begin another week of exploring the Gulf’s depths.

“There’s hardly been any camera work at all.”

A porbeagle #shark swimming in the Laurentian Channel North during our expedition with @DFO_MPO. Watch live at https://t.co/juSVeCYELx pic.twitter.com/jfNk6Qwvy0

Alexandra Cousteau, granddaughter of the famous French filmmaker and marine conservationist Jacques Cousteau, is part of the expedition and an adviser to Oceana, an international ocean conservation group based in Washington, D.C.

“It’s such a thrill to be part of something that has never been done before,” Alexandra Cousteau said in a dockside interview.

The recent deaths of at least 10 endangered North Atlantic right whales in the Gulf have focused international attention on the importance of the vast area.

The ROPOS (Remotely Operated Platform for Ocean Sciences) is a state-of-the-art underwater robot that can collect samples and scientific data as well as high-definition video. (The Canadian Press/Oceana Canada/Ray Morgan)

Cousteau said previous studies have typically relied on the use of underwater sleds that were dragged along the ocean floor and later hoisted to the surface for inspection by scientists.

“What they got at the surface was broken,” she said. “They had no idea how the species were interacting. We’ve been able to see how that whole neighbourhood works.”

ROPOS gathers a sea pen, a type of bottom-dwelling coral that looks like old-fashioned pens made from fanciful feathers, sample during the Gulf of St. Lawrence expedition. (Oceana Canada)

In particular, Cousteau said the high-tech submersible — ROPOS stands for Remotely Operated Platform for Ocean Sciences — has recorded video images of large numbers of juvenile redfish seeking shelter amongst fields of sea pens, a type of bottom-dwelling coral that looks like old-fashioned pens made from fanciful feathers. 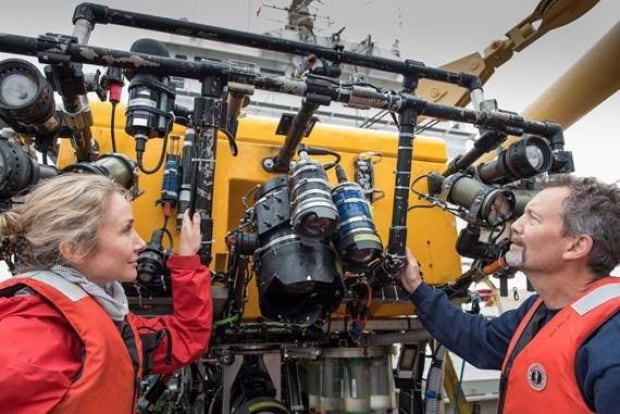 Onboard the Martha L. Black, Robert Rangeley (right), director of science at Oceana Canada and Alexandra Cousteau, Oceana senior adviser, inspect the ROPOS after a dive. (The Canadian Press/Oceana Canada)

Redfish, which are also known as ocean perch, are a commercially valuable species that have been on the decline for years.

But the video suggests the species may be making a comeback, as some Gulf fishermen have already suggested.

“If this is where the juveniles are finding shelter, then we need to protect that,” said Cousteau. “I think that’s something everybody can agree on.”

Rangeley, a research scientist who used to work with World Wildlife Fund Canada and the Fisheries Department, said he and his colleagues have also spotted porbeagle sharks, right whales, cod, sponges and large schools of sand lance, a herring-like fish that is a key source of food for whales and seabirds.

“We saw massive schools of them for the longest time,” the marine biologist said. “We could hardly see through the lens of the ROPOS … It’s a pretty lively place, the Gulf of St. Lawrence.”

A rare rhinochimera, a relative of sharks and rays, swims past ROPOS as it takes a sample. (Oceana Canada)

At one point, the cameras captured the moment when a northern gannet, a large seabird known for its torpedo-like fishing skills, plunged into the water to feast on sand lance.

The research is important because Canada has the world’s longest coastline.

The federal government has committed to conserving 10 per cent of the country’s marine areas by 2020.

The expedition started last week off the coast of Quebec’s Anticosti Island, and then moved to the American Bank, a submarine cliff lying off the eastern tip of Quebec’s Gaspé Peninsula.

More exploration is expected this week off the west coast of Cape Breton.

Redfish are seen swimming near an anemone and a fan-shaped sponge in the Laurentian Channel. (Oceana Canada)

Oceana, established two years ago in Canada, was part of a similar expedition in the Gulf of Maine in June.

The ROPOS submersible, which can dive to 5,000 metres, is being carried aboard the CCGS Martha L. Black, a Canadian Coast Guard light icebreaker.

The submersible is owned by the Canadian Scientific Submersible Facility, based in North Saanich, B.C.