As the national inquiry into missing and murdered Indigenous women and girls makes its logistics stop in Rankin Inlet before the public hearings in the community in December, it’s asking for more Inuit to register to tell their stories.

MMIWG’s Inuit staff are visiting Rankin Inlet this week to help support those who might want to come forward.

Barbara Sevigny, a manager of MMIWG’s health team, says 450 people from across Canada have signed up to tell their stories to the public inquiry, but only a “handful” of those are Inuit.

Louee Okalik has been in touch with the Kivalliq Inuit Assocation and the Rankin Inlet hamlet council, but says she wants to reach out to more families. (Jordan Konek/CBC)

According to government of Nunavut statistics,  45 Inuit women have been murdered or gone missing in the territory since 1980. Sixteen of those were under the age of 18.

Sevigny says, as an Inuk whose sister was murdered, it’s important for her that Inuit are running this logistics meeting. It’s her job to ensure that there are bilingual counsellors available to family members and survivors of abuse throughout the testimony process.

Involving Inuit in the process is “critical,” she said.

“Not being understood with my Inuit history, and not having somebody who speaks Inuktitut when receiving any counselling, there’s a lot of misinterpretations, misunderstandings, misdiagnosis.”

The MMIWG team also has a community liaison officer and legal counsel in Rankin this week.

Looee Okalik, community liaison for MMIWG in Inuit Nunangat, says they have been working with the hamlet office and the Kivalliq Inuit Association to get the word out to Inuit. She says they are considering using social media to inform residents about the national inquiry.

“It’s about their story. We don’t control what they’re saying. They’re sharing with us and we’re here to listen in a safe environment, a private environment, whatever is most comfortable for the family members,” Lillian Aglukark-Lundrigan, commission legal counsel, said. 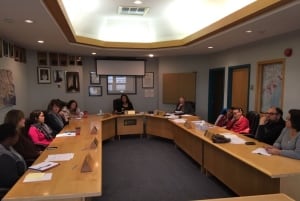 The Rankin Inlet Hamlet Council met on the topic of MMIWG. The conversation was mostly in Inuktitut. A council member said, “We will give you all the support we can and this has to be done.”

Aglukark-Lundrigan says she’s helping families figure out how to tell their stories to the public hearing that will happen the week of December 11. If necessary, she helps with tracking down coroner’s or police reports and other documentation for the family.

The logistics visits were instituted by the inquiry after its first public hearing in May in Whitehorse, Yukon, where it learned that laying the groundwork was critical to the process.

The first of the rebooted public hearings is due to take place on Sept. 25 in Smithers, B.C.

The inquiry is visiting 10 communities they were invited to. The invitation to Rankin Inlet came from resident Laura MacKenzie.

More visits to more remote communities may be scheduled in 2018. For the moment, staff is encouraging Inuit, including those outside Rankin Inlet, to contact Joseph Flowers on his cellphone at 867-222-1015 for more information.