Tropical Storm Harvey sent devastating floods pouring into Houston on Sunday as rising water chased thousands of people to rooftops or higher ground and overwhelmed rescuers, who could not keep up with the constant calls for help.

The incessant rain covered much of Houston in murky, grey-green water and turned streets into wide channels navigable only by boat.

In a rescue effort that recalled the aftermath of Hurricane Katrina, helicopters landed near flooded freeways, airboats buzzed across inundated neighbourhoods and high-wheel vehicles plowed through waterlogged intersections. Some people managed with kayaks or canoes or swam.

Volunteers joined emergency teams to pull people from their homes or from the water, which was high enough in some places to gush into second floors.

The flooding was so widespread that authorities had trouble pinpointing the worst areas. They urged people to get on top of their homes to avoid becoming trapped in attics and to wave sheets or towels to draw attention to their location.

As the water rose, the National Weather Service offered another ominous forecast: Before the storm passes, some parts of Houston and its suburbs could receive as much as 1.3 metres of rain. That would be the highest amount ever recorded in Texas.

“The breadth and intensity of this rainfall is beyond anything experienced before,” the National Weather Service said in a statement.

Alexa Ortiz, left and Lucas Garcia walk through their destroyed home in Refugio, Texas, on Saturday. Garcia, Ortiz and six other family members along with seven animals rode out the storm in a room in their home. (Olivia Vanni/The Victoria Advocate via Associated Press)

Federal Emergency Management Agency director Brock Long said the government expected to conduct a “mass care mission” and predicted that the aftermath of the storm would require FEMA’s involvement for years.

“This disaster’s going to be a landmark event,” Long said.

‘The water is swallowing us up’

Rescuers had to give top priority to life-and-death situations, leaving many affected families to fend for themselves. The city’s main convention centre was quickly opened as a shelter.

Gillis Leho arrived there soaking wet. She said she awoke Sunday to find her downstairs flooded. She tried to move some belongings upstairs, then grabbed her grandchildren.

“When they told us the current was getting high, we had to bust a window to get out,” Leho said.

Harris County Sheriff Ed Gonzalez used Twitter to field calls for assistance. Among those seeking help was a woman who posted: “I have 2 children with me and the water is swallowing us up.”

Some people used inflatable beach toys, rubber rafts and even air mattresses to get through the water to safety. Others waded while carrying trash bags stuffed with their belongings and small animals in pet carriers.

Houston Mayor Sylvester Turner said authorities had received more than 2,000 calls for help, with more coming in. He urged drivers to stay off flooded roads to avoid adding to the number of those stranded.

“I don’t need to tell anyone this is a very, very serious and unprecedented storm,” Turner told a news conference. “We have several hundred structural flooding reports. We expect that number to rise pretty dramatically.”

The mayor defended his decision not to ask residents to evacuate before the heavy rain from Harvey swamped roads and neighbourhoods. He said there was no way to know which areas were most vulnerable.

“If you think the situation right now is bad, and you give an order to evacuate, you are creating a nightmare,” he said, citing the risks of sending the city’s 2.3 million inhabitants onto the highways at the same time. 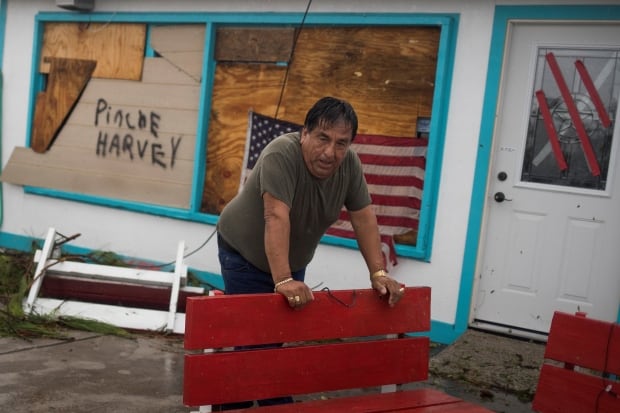 Rainfall of more than 10 centimetres per hour resulted in water levels higher than in any recent floods and higher than during Tropical Storm Allison in June 2001, said Jeff Linder of flood control district in Harris County, which includes Houston.

For those trying to escape, rescue came by land, water and air.

On Interstate 45 south of downtown, television video showed people climbing over concrete dividers to get to a high-wheel dump truck that appeared to be wheels-deep in water on a service road. They clambered up the side of the truck to get into the dump box.

In Friendswood near Houston, authorities asked people with flat-bottomed airboats or fuel for them to help rescue people.

Jesse Gonzalez and his son, also named Jesse, used their boat to rescue people from a southeast Houston neighbourhood. Asked what he had seen, the younger Gonzalez replied: “A lot of people walking and a lot of dogs swimming.”

“It’s chest- to shoulder-deep out there in certain areas,” he told TV station KTRK as the pair grabbed a gasoline can to refill their boat. 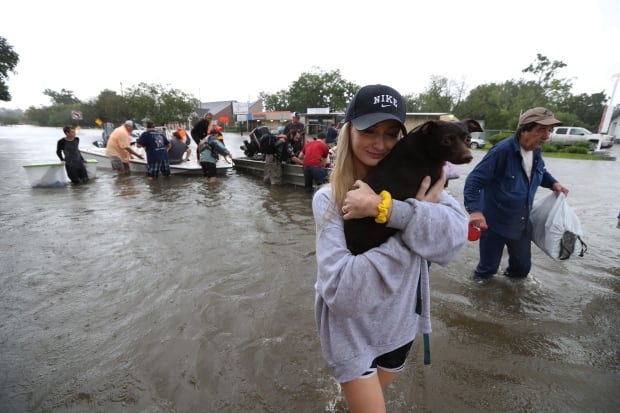 Mikhail Bachynsky hugs her dog Lily after they were rescued from their home Sunday in the Friendswood area of Houston. (Steve Gonzales/Houston Chronicle/Associated Press)

The Coast Guard, which received more than 300 requests for help, deployed five helicopters and asked for additional aircraft from New Orleans.

Staff at a Houston TV station broadcasting live coverage of the floods were forced to leave after water started to gush into the building. The anchors and news operations at KHOU moved first to a second floor before finally abandoning the station.

Rainfall totals climbed by the hour. Since Thursday, South Houston had received nearly 63 centimetres and the suburbs of Santa Fe and Dayton got 69 centimetres.

President Donald Trump tweeted Sunday morning that he would visit Texas “as soon as that trip can be made without causing disruption. The focus must be life and safety.”

I will be going to Texas as soon as that trip can be made without causing disruption. The focus must be life and safety.

The rescues unfolded a day after the hurricane settled over the Texas coastline. It was blamed for killing at least two people.

One person was killed in Aransas County in a fire at home during the storm, county Judge C.H. “Burt” Mills Jr. said.

Another person — a woman who tried to get out of her vehicle in high water — died in flooding in Harris County, though authorities had not confirmed a cause of death, said Gary Norman, a spokesman for the Houston emergency operations centre.

“There obviously have been reported fatalities but I’m not in a position to confirm that they’re related to the storms,” Gov. Greg Abbott said during a news conference on Sunday afternoon. 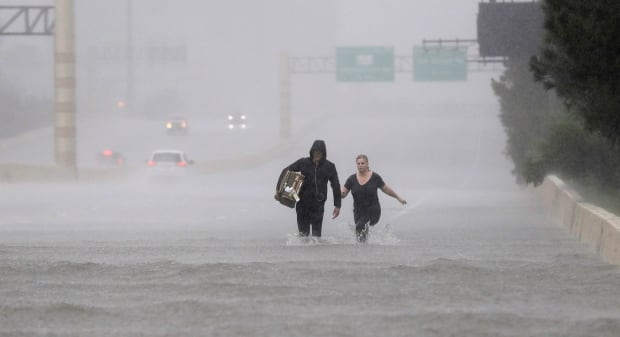 Two people walk down a flooded section of Interstate 610 in floodwaters from Tropical Storm Harvey on Sunday in Houston. (David J. Phillip/Associated Press)

The governor warned state residents to be prepared for more rainfall, a “historic if not all-time record rainfall” in certain regions. He also warned Texans to stay tuned to information about tornado warnings and watches as there could be tornado action on Sunday evening.

The National Guard, the Texas State Guard and the Texas Department of Transportation have deployed 3,400 members from Houston to Victoria to Corpus Christi, Abbott said.

There are more than 250 highway closures in that triangle. And there are 316,000 outages, down from Saturday’s 338,000 outages, Abbott said, citing the public utility commission of Texas.

The Red Cross is serving about 130,000 meals a day with heaviest efforts in Corpus Christi, Houston and Victoria. The governor urged Americans who want to help Texans to visit redcross.org.

The fiercest hurricane to hit the U.S. in more than a decade came ashore late Friday about 48 kilometres northeast of Corpus Christi as a mammoth Category 4 storm with 209 km/h winds.

Harvey weakened Saturday to a tropical storm. On Sunday, it was virtually stationary about 40 kilometres northwest of Victoria, Texas, with maximum sustained winds of about 72 km/h, the hurricane centre said.

The system was the fiercest hurricane to hit the U.S. in 13 years and the strongest to strike Texas since 1961’s Hurricane Carla, the most powerful Texas hurricane on record.