For longtime Bruce Springsteen fan Debbie Elster, there’s never been any doubt the competition to get tickets for his upcoming Broadway shows is going to be fierce.

But she’s feeling a little more hopeful, thanks to a new online verification system for ticket-buying that aims to keep more tickets in the hands of fans rather than re-sellers who seemingly snap them up and put them on the market, often for several times the face value.

Known as Verified Fan, the program from Ticketmaster requires people to register for a specific sale in advance, with information including their names, phone numbers and emails.

The registrations are reviewed, including past ticket purchase history and even social media accounts, with an eye toward determining whether they’re more likely to be event attendees.

Those accepted get unique codes that they can use when they go to buy tickets on the sale date.

The premise is that by vetting registrants, it’s more likely that actual fans would be the ones getting the first crack at hot tickets, instead of brokers and re-sellers.

Verified Fan has been used for concert sales for artists such as Ed Sheeran and Harry Styles, and is now showing up for Broadway sales. Springsteen on Broadway, running from Oct. 3 to Nov. 26, is using the system, as is another show expected to be a hot prospect, Harry Potter and the Cursed Child, opening next spring.

The producers of the immensely popular Hamilton announced Tuesday that a new block of tickets for the show would go on sale through Verified Fan. That show has been the subject of a huge re-sale market, with tickets going for hundreds of dollars if not more than the face values.

Premium seats for Hamilton run as high as $849 US, with prices on the secondary ticket markets more than double that amount. While Hamilton has put aside a few digital lottery seats for $10, the average ticket last week went for $282.65. 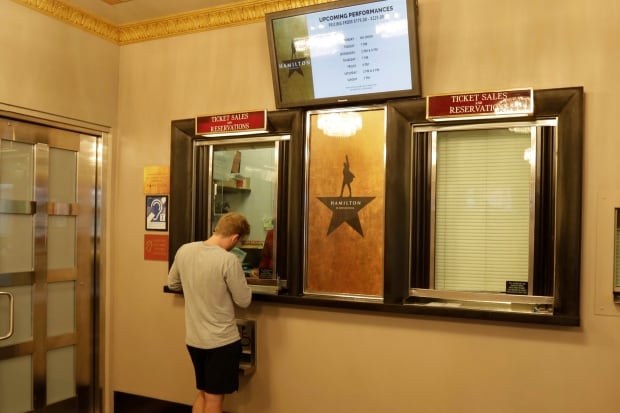 A theatre goer purchases a ticket to the Broadway show Hamilton in New York. The incredibly popular show announced this week that it would be the latest to offer up a new block of tickets for sale using Verified Fan. (Richard Drew/The Associated Press)

Those kinds of prices make Ayodele Williams, 44, of Philadelphia, outraged. She and her sister were in New York last week to see a performance of Hamilton, and they had tickets they consider themselves lucky to have snagged at face value last fall.

David Marcus, executive vice-president for Ticketmaster, said that was the point of the registration system: to give fans a better experience.

“It’s intended to make the initial distribution fairer,” he said, to fight against a system where brokers are the first ones out of the gate for tickets.

Re-sale has a role, he said, but it shouldn’t be the oversize one it’s playing.

He said so far the program has been working. Of the more than a million tickets distributed through Verified Fan since it began beta testing late last year, less than 5 per cent have gone onto the secondary re-sale market.