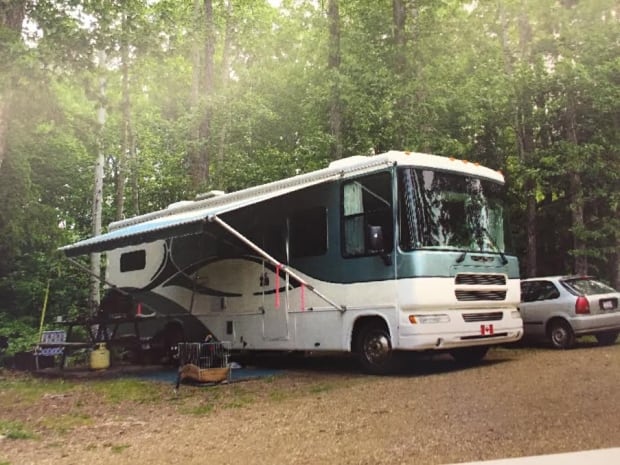 The fire that consumed the motorhome that Lyle and Marie McCann owned was so intense it knocked out the vehicle’s windshield and sent it flying 20 feet.

By the time volunteer Edson fire commander Robert Burgess arrived there was no chance to save the RV.

“I observed the motor home burning,” he said. “Fully involved.”

Burgess tried to get closer, but decided to stay back when the RV’s rear tires exploded. At that point, the main objective was to suppress and contain the fire at the Minnow Lake campground, about a half hour drive south of Edson.

Took an hour to reach campground

The fire was reported shortly after 7 p.m. on July 5, 2010, when a man on his way home from work spotted smoke. It took fire crews and RCMP about an hour just to reach the remote campground.

Once the fire was put out, the volunteer firefighter in charge of the pumper truck had to make sure no one had died in the blaze.

Lee’Roy Lonsberry testified at the Travis Vader first-degree murder trial in Edmonton that he was absolutely confident there were no human remains.

The experienced firefighter told court: “If there had been someone in that vehicle and they had been burned, you would smell their body. Once you’ve smelled a burning body, you never forget that smell.”

The McCanns, from St. Albert, had last been seen alive on July 3, two days before their motorhome went up in flames. Their bodies have never been found.

RCMP did not preserve or contain the burn site as a crime scene. There were no exhibits collected, no yellow tape put up. The burned-out motorhome shell was hauled to the Edson dump the next day, and the chassis was taken to a storage yard in Edson.

The elderly couple was reported missing five days after the fire. That’s when RCMP began to take a much closer look at what happened to the motorhome. RCMP asked an expert in fire investigation to determine whether an accelerant had been used to start the blaze.

Odd Gunderson worked with his accelerant dog, Jobi. The black lab found evidence of an ignitable liquid at the fire scene, at the storage yard where the chassis was towed and at the Edson dump. But the findings were of little value.

“If everything had been left where it was originally,” Gunderson testified, “and not moved and not cleaned up, it would have made a big difference.”

The fire commander has a theory on what could have started the blaze.

Robert Burgess said he thinks someone drove it at a high rate of speed towards a four-foot-high dirt berm at the campground.

He said he believes the impact would push back the still running engine, causing the gas line to break. At that point, he thinks leaking fuel and an electric spark started the fire.