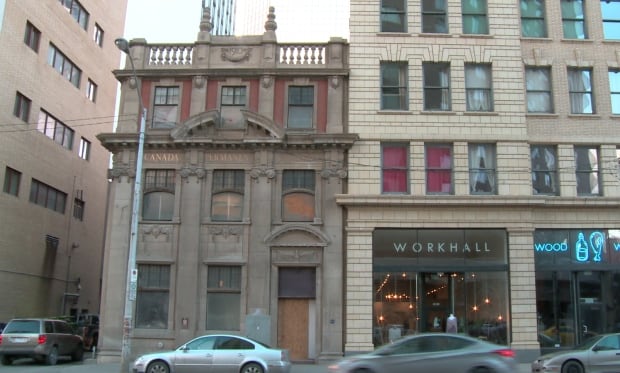 Four entrepreneurs from France are looking to transform the 1910 bank building into The French Square, a centre for French food and wine.

“We’re hoping to bring the Parisian flair,” said Myriam Melsan Touré. “I want them to feel the Parisian atmosphere. We want to add a little French touch to the city.”

The Canada Permanent Building has been boarded up for four years. (CBC)

The building will house bakery, a mini French market and a Parisian bistro complete with a roof terrace.

“Some of us are lovers of old buildings. Some of us love good food, wine, cheese, charcuterie, so we gathered together and decided it would be nice for us to open something that is typical of back home.”

The group is now looking to the public for financial support, starting an online Kickstarter campaign to raise $100,000.

Touré said the group has completed the market research and is laying the groundwork for the project, including the restoration of the building.

“It’s an amazing building,” she said. “The windows are just like … they’re beautiful. They’re my favourite so far. They remind me of Versailles.”

When the group began thinking about their project, they began looking for a space, Touré said. “While we were roaming the city we found the Canada Permanent Building and completely fell in love.”

She was shocked the building was falling into dilapidation.

She believes the building will need about of 10 months of work to restore it.

Jim Taylor with the Downtown Business Association has been hoping for a someone to take on the project.

It’s just a shame to have a building — that’s quite an attractive building and in a prominent place — sitting vacant.”

The building housed the Japanese Village Restaurant for nearly 40 years, but has been boarded up since 2012.