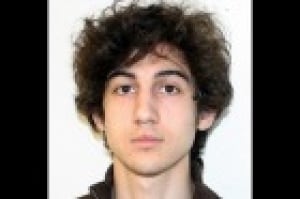 A Massachusetts Institute of Technology graduate student on Wednesday identified Boston Marathon bomber Dzhokhar Tsarnaev as the man he saw leaning in to the police cruiser of an MIT officer who was fatally shot three days after the bombings.

Nathan Harman, 24, a student working toward a Ph.D. in mathematics, testified that he was riding his bike through a campus courtyard at about 10:20 p.m. on April 18, 2013, when he saw a parked MIT police cruiser. Harman said the driver’s-side door was open and there was a man bent at the waist and leaning in to the cruiser.

“He sort of snapped up, stood up and turned around, and he looked startled,” Harman said. “And then I just didn’t think anything of it and rode off.”

When asked by a prosecutor if he saw the person in the courtroom on Wednesday, Harman pointed to Tsarnaev. “He’s right there,” he said.

Harman said he assumed Tsarnaev was an MIT student.

“I remember thinking he had a big nose, but nothing beyond that really,” he said.

Prosecutors say Tsarnaev and his older brother, Tamerlan, killed MIT police Officer Sean Collier as he sat in his cruiser that night in a failed attempt to steal his gun. The shooting came hours after the FBI released images of the brothers, identifying them as suspects in the marathon bombings.

Harman said he did not see a second person near the cruiser.

Prosecutors showed jurors a surveillance video that showed Collier’s parked cruiser, with two figures walking up behind it, then going to the driver’s-side window. The car’s brake lights go on and off, then the two figures are seen running away. The video does not show the faces of the two people, and prosecutors have acknowledged that their identities cannot be determined by the video.

Earlier Wednesday, jurors saw the tattered pieces of the backpack that Dzhokhar Tsarnaev used to carry a bomb in the deadly attack and heard a frantic call made by the policeman who found Collier mortally wounded.

A witness testifying Wednesday says he saw Dzhokhar Tsarnaev near the vehicle of MIT police officer Sean Collier. Collier died after being shot in his cruiser.

FBI Agent Sarah De Lair held up pieces of the black and white backpack for the jury. She said they were found near the Forum restaurant, where Tsarnaev planted and detonated a bomb on April 15, 2013.

Three people were killed and more than 260 injured when the brothers set off two pressure-cooker bombs near the marathon finish line.

Dzhokhar Tsarnaev’s lawyers have admitted he participated in the bombings but say Tamerlan was the mastermind. Tamerlan, 26, died in a shootout with police four days after the bombings.

Dzhokhar, now 21, faces the possibility of the death penalty if convicted.

MIT Officer David Sacco described receiving a call from a resident who heard loud noises and saw an MIT cruiser outside three days after the bombings. After being unable to reach Collier, Sacco sent another officer to check on him.

The jury heard a recording of that officer yelling, “Officer down! Officer down!” when he discovered Collier shot multiple times. “Get on it!” the officer yells frantically.

Collier was shot hours after the FBI released photos of the Tsarnaevs and asked for the public’s help in finding them.

Testimony is set to resume Thursday.