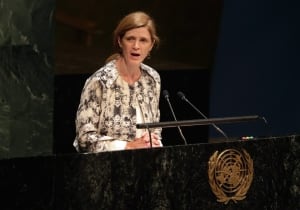 With the UN Security Council blocked from taking strong action on Syria, the United States and other nations are hoping to shame its government by sponsoring a graphic photo exhibit of detainees who’ve died in President Bashar al-Assad’s prisons since the country’s conflict began.

Fifteen countries will join the opposition Syrian National Coalition on Tuesday at United Nations headquarters to launch the exhibit of portraits showing signs of torture and starvation and to call for an end to the crisis that enters its fifth year this month.

“Anyone who has seen the images will never forget them,” U.S. Secretary of State John Kerry said in an address to the UN Human Rights Council in Geneva last week. “Maimed bodies, people with their eyes gouged out, emaciated prisoners. It defies anybody’s sense of humanity.”

The images are from a collection taken by a crime scene photographer for the Syrian military who was reassigned to photograph the bodies of rebels and dissidents after the conflict began. He later defected, and his archive of images of more than 10,000 bodies was smuggled out of the country. He now goes by the pseudonym Caesar, and he testified in disguise last year before the U.S. Congress, saying he had witnessed a “genocidal massacre.”

Syrian opposition groups hope to use his images to prosecute Assad’s government for war crimes, and they’re starting to post the images online in the hope that the public will help in identifying the dead. The FBI has been assessing the authenticity of the photos, while U.S. and other officials have praised Caesar for his work.

After a viewing behind closed doors for Security Council members last year, U.S. Ambassador Samantha Power said the photos “indicate that the Assad regime has carried out systematic, widespread and industrial killing.”

But the council’s attempt weeks later to refer Syria’s situation to the International Criminal Court failed when permanent council member Russia, an Assad ally, vetoed the move along with China.

Some council members have said it’s time to try again for an ICC referral.

Among the sponsors of the new exhibit are four council members — the U.S., France, Britain and Lithuania — along with Qatar, Saudi Arabia, Turkey, Belgium, Denmark, Germany, Kuwait, Luxembourg, Norway, Sweden and the United Arab Emirates.

The UN representative of the Syrian National Coalition, Najib Ghadbian, told The Associated Press that Syria’s representatives at the UN were welcome to attend, though the two sides don’t speak to each other. The coalition in January demanded that the UN take down a photo exhibit sponsored by the Syrian mission to the UN that referred to the opposition as “terror groups.” That failed, and the coalition pursued its own event.

When he saw the photos from the Caesar exhibit for the first time Friday in his office, Ghadbian said he sobbed.

“Every single one of them is very graphic and disturbing. But this is what’s happening,” he said. “We need to tell the world that impunity cannot go on.”