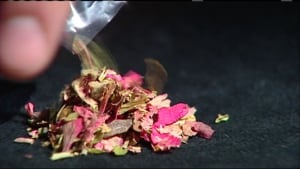 An Edmonton woman says her decision to smoke a synthetic drug to beat her employer’s drug tests created a two-year addiction that ruined her financially and nearly killed her.

The drug is one of several that are illegal to market as cannabis alternatives, but until recently were sold openly in some head shops and convenience stores as incense, and labelled “not for human consumption”.

While recent police raids may have driven sales in Canada underground, the synthetic cannabinoids are still available on the internet.

“I wouldn’t wish it on my worst enemy,” said the woman.

While head shops may no longer be selling synthetic cannabinoids such as ‘Spice’ openly, the same drugs are widely available on the internet. (CBC)

Go Public agreed to withhold the identity of the woman, whom we’ll call Catherine.

Catherine said she and her husband had high-paying jobs in the energy business. She heard “synthetic pot” could be bought at head shops and that drug tests used in the oilpatch wouldn’t detect it.

“I was addicted from the first toke,” she said.

When she and her husband weren’t working 10 or 12-hour shifts, they were smoking up, going days without eating, she said.

“I went through every dime I have in the world and I’m severely in debt,” she said.

‘I knew I was in trouble’

The addiction was incredibly degrading, she said.

“I can’t explain the violence, the delusions, the paranoia, the puking, shitting myself, pissing myself. I knew I was in trouble, but I couldn’t stop.”

“Before this I was an avid golfer. We travelled the world. We liked fishing, swimming, adventures. All that came to a halt for two reasons — we didn’t have the money and because these countries didn’t carry synthetic weed.” 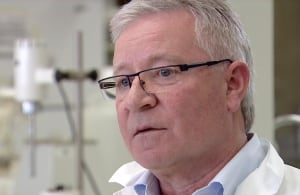 Prof. Alan Hudson says synthetic marijuana can be much more powerful than natural cannabis and can cause psychosis in some people. (CBC)

Catherine said she knew she needed help when her husband found her choking on vomit after a blackout.

“He rolled me over, got me going again. And I grabbed that pipe and I loaded it up again.”

Catherine said the withdrawals were hard to bear.

“I’ve heard of this term carpet-crawling,” she said. “I went through every inch of this house and garbage cans praying that there would be just a little bit in a bag.”

Catherine completed a week at a government addiction treatment centre, but is worried the drugs may have damaged her brain and permanently altered her personality. She struggles to keep her hands and legs still when talking.

“I noticed my memory starting to go really, really bad,” she said.

“I believe it was eating part of my brain, the cognitive functions. I’d have a thought that I wanted to convey and … I’d either lose it completely or I was all over the map.”

The drugs, which are sold under names such as “Spice,” “Zinger” and “K2,” are known as synthetic cannabinoids because they affect the same brain receptors as the active ingredient in marijuana.

Experts say the similarity ends there, however, and that the drugs’ toxicity and risks aren’t known fully.

Synthetic cannabinoids were developed by scientists who wanted to study how they affect brain function and whether they could offer potential relief for chronic pain.

Most of the chemicals were found to cause serious side-effects such as convulsions, according to Alan Hudson, associate professor of pharmacology at the University of Alberta.

Since then, there’s been little research on the toxicity of synthetic cannabinoids or their long-term effects on physical and mental health.

“No one’s willing to fund research to show how toxic they are,” Hudson said.

Not everyone experiences a reaction as severe as Catherine’s, he said.

What is known, Hudson said, is that the drugs are many times more powerful than natural cannabis and can cause psychosis in some people. He said there has been a recent increase in people winding up in hospital after smoking the drugs.

“I would strongly advise you not to try these substances,” he said.

Unlike some countries and U.S. states, Canada hasn’t expressly banned synthetic cannabinoids, although it controls them under the term “similar synthetic preparations” to cannabis.

Winning conviction can be difficult

There have been a few drug seizures in Alberta in the past two years, but getting a conviction can be difficult, according to Const. Brent Clarke, an investigator with the RCMP’s Serious and Organized Crime Division in Edmonton.

Clarke said there are many different synthetic cannabinoids and not all have made it to the list of those that are banned.

“The problem is we have to wait for Health Canada to complete an analysis for the investigators and confirm this is a controlled substance and go from there,” Clarke said.

And while head shops may no longer be selling “Spice” and “K2” “incense aromas” openly, the same drugs are widely available on the internet.

“We’re very concerned right now. There’s a lack of knowledge about the dangers,” he said.

Although Health Canada is continually adding new cannabinoids to its list of banned chemicals, dealers are working hard to stay ahead of them, said Matthew Young, senior research and policy analyst at the Canadian Centre on Substance Abuse.

“These formulas are changing in some ways to try to outpace existing legislation,” Young said.

“There’s so many of these substances out on the market right now that it’s very difficult to know what’s contained in each packet and what the effect will be on your body,” he said.

Young said research in the U.S. indicates many of the people who try synthetic cannabinoids are, like Catherine, doing so to avoid testing positive for drugs.

Youth could be next target

That attraction may close if employers make bigger use of new synthetic marijuana drug test kits coming on the market.

Hudson believes the next target market is young people.

“They see these packets of herbal essences, they think they’re safe. They don’t see the danger,” he said.

Catherine said she noted the lack of knowledge about synthetic cannabinoids’ first-hand, even among her doctors.

“Health-care professionals may have heard of it, but they are thinking of it as like ‘pot light’? It doesn’t sound as dangerous as it really, really is,” she said.

She said she doesn’t want other people to make the same mistake she did.

“I feel so grateful to be alive. I’ve learned to accept myself and love myself and forgive myself. So if any of these disabilities are forever, I guess, so be it.

“I feel so grateful to be alive. I’ve learned to accept myself and love myself and forgive myself.”