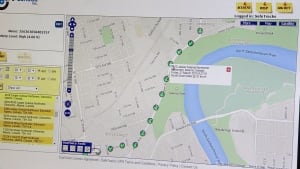 A Red Deer company whose products help enforce probation orders for convicted criminals is now part of a study to help families of dementia patients.

In April 2014, Alberta Health Services gave the devices to about 50 families to study the potential benefits for seniors with dementia.

“They feel like it’s a real relief to the stress and worry that they have about dementia,“ said Alberta Health Services project leader Tracy Ruptash.

The SafeTracks GPS technology allows caregivers to watch the movements of their loved ones in real time on their smartphones or computers. (CBC)

​She said several families have tracked down missing loved-ones using the devices since the study began.

Ruptash said the locating device preserves the independence of people with dementia with the potential to limit the number of missing persons calls to police.

Wandering can be very dangerous for people with dementia, said Ruptash. The devices alert caregivers when their loved one leaves a designated zone, so they can find  them quickly.

“We send an email and a text message almost instantaneously saying that someone has left the safe area and they might be in danger,” said Bob Aloisio, SafeTracks’ vice president.

The person’s movements can also be tracked on the caregiver’s smartphone.

“We can literally drive right up beside the individual and make sure they’re safe and safely get them home,” Aloisio said.

Aloisio said the more the company learns about the needs of dementia patients, the more they will be able to tailor their products.