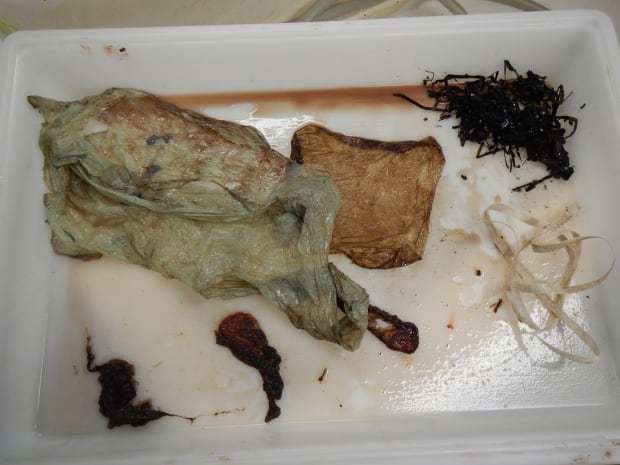 A whale that washed up on McNabs Island in Halifax Harbour died because it had a belly full of plastic, scientists said this week.

Tonya Wimmer, the coordinator of Marine Animal Response Society, said they found cuts on its neck and tail. In the stomach, they discovered plastic.

“We actually found quite a few plastic bags and plastic strapping — the kind you’d find on boxes of paper or on fish bait boxes. The animal had actually ingested it and got basically lodged just before its stomach, which meant it couldn’t feed after that,” said Wimmer.

“It wasn’t even that much plastic. Everyone sort of gasped and stopped.”

The necropsy reminded student Lindsey Devers how much harm pollution can do.

“It was a very interesting learning experience because I didn’t know that amount of pollution could hurt a whale,” she said.

“I’ll definitely be more careful. I always try to do my part and recycle and everything, but now if I see a piece of trash down by the ocean I’ll pick it up.”

The pygmy sperm whale rarely visits Canadian waters. The animals reach about 3.6 metres when full grown and eat octopus, squid, crab fish and shrimp. This whale likely mistook the plastic for one of those creatures.

“This one was only about seven feet [2.1 metres], so maybe a juvenile or an immature animal,” Wimmer said.

“They’re not normally seen here but they’re also really hard to see. It’s one of those species we don’t necessarily … have enough information to really even know that much about them here.”

An ocean of plastic

People spotted the whale swimming in the harbour, moving slowly with injuries to its neck and tail.

Wimmer said it’s often difficult to determine the cause of death in these animals, especially whether human interference is to blame.

“In this case it definitely was,” she said.

“That’s the thing about plastics in our oceans. They go tremendous distances and these animals are just swimming along. Whether they think it’s food or something and they just grab it and eat it as if it was a squid.”

She said the plastic could have come from anywhere in the world.

Several plastic items were found in the whale’s stomach.