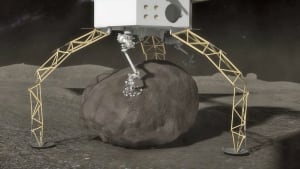 NASA is aiming to launch a rocket to an asteroid in five years and grab a boulder off of it — a stepping stone and training mission for an eventual trip sending humans to Mars.

The space agency Wednesday unveiled details of the $1.25 billion US plan to launch a solar-powered unmanned spaceship to an asteroid in December 2020. The ship would spend about a year circling the large space rock and pluck a four-metre-wide boulder off its surface using robotic arms. It would have three to five opportunities to grab the rock, said Robert Lightfoot, NASA’s associate administrator.

The smaller rock would be hauled near the moon and parked in orbit around the moon. Using a giant rocket ship and the Orion crew capsule that are still being developed, two astronauts would fly to the smaller rock in 2025 and start exploring. Astronauts aboard Orion would dock with the robotic ship, make spacewalks, climbing around the mini-asteroid to inspect and document, and even grab a piece to return to Earth.

The ship would spend about a year circling the large space rock and pluck a four-metre-wide boulder off its surface using robotic arms. (NASA)

The smaller rock might not even be big enough for the two astronauts to stand on; it would have fit in the cargo bay of the now-retired space shuttles.

The mission will “demonstrate the capabilities we’re going to need for further future human missions beyond low Earth orbit and then ultimately to Mars,” Lightfoot said.

Lightfoot also identified the leading target. It’s a 400-metre wide space rock discovered in 2008 called 2008 EV5, making it somewhat larger than most of the asteroids that circle the sun near Earth. Two other space rocks are being considered, called Itokawa and Bennu.

NASA managers chose this option over another plan that would lasso or use a giant bag to grab an entire asteroid and haul it near the moon. The selected plan is about $100 million more expensive but it was picked by managers in a meeting Tuesday because it would test technologies and techniques “we’re going to need when we go to another planetary body,” Lightfoot said during a telephone press conference. Those include “soft landing” and grabbing technologies, he said.

A few years ago, the administration proposed sending astronauts to an asteroid and landing on it, but later changed that to bringing the asteroid closer to Earth.

The $1.25 billion price does not include the larger costs of the rockets launching the spaceships to the asteroid and the smaller boulder.

The entire project called ARM for Asteroid Redirect Mission would also test new spacesuits for deep space, as opposed to Earth orbit, and may even help companies look at the idea of mining asteroids for precious metals, said NASA spokesman David Steitz.

Steitz said by getting closer to the large asteroid, the mission will help with “planetary defense” techniques, learning how to nudge a threatening space rock out of harm’s way.

Scott Pace, space policy director at George Washington University and a NASA associate administrator in the George W. Bush administration, said the concept in some ways makes sense in terms of training, engineering and cost, but “it still leaves the larger questions: What this leads to and why?”