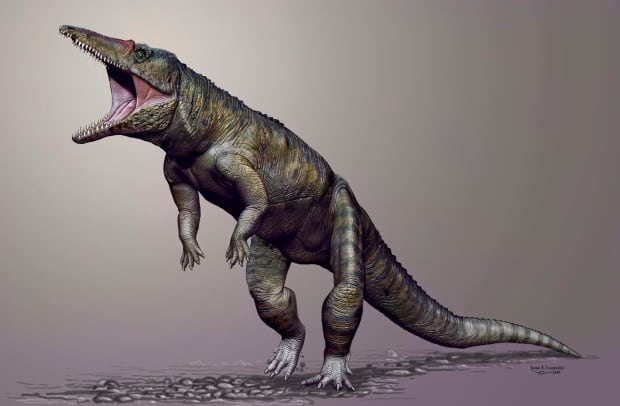 Carnufex carolinensis prowled on two legs in the warm equatorial region that North Carolina was during the Triassic. ( Jorge Gonzales)

The “Carolina butcher” has been found and is just as scary as the name suggests.

Scientists on Thursday said they had unearthed fossils in North Carolina of a big land-dwelling croc that lived about 231 million years ago, walked on its hind legs and was a top land predator right before the first dinosaurs appeared.

Transported back to the Triassic Period, what would a person experience upon encountering this agile, roughly three metre-long, about 1.5 metre-tall beast with a long skull and blade-like teeth?

The creature is named Carnufex carolinensis, meaning “Carolina butcher,” for its menacing features. It was a very early member of the croc lineage and was unlike today’s crocs. It was not aquatic and not a quadruped, instead prowling on two legs in the warm equatorial region that North Carolina was at the time.

It lived alongside armored plant-eating reptiles known as aetosaurs, early mammal relatives and other fierce predators such as the large, long-snouted, water-dwelling, four-legged phytosaurs.

Carnufex is one of the most primitive members of the broad category of reptiles called crocodylomorphs, encompassing the various forms of crocs that have appeared on Earth.

“As one of the earliest and oldest crocodylomorphs, Carnufex was a far cry from living crocodiles. It was an agile, terrestrial predator that hunted on land,” Zanno said. “Carnufex predates the group that living crocodiles belong to.”

The scientists unearthed portions of Carnufex’s skull, spine and forelimb parts from a Chatham County quarry. They also created a three-dimensional model of the skull, filling in the missing parts with the more complete skulls of close relatives.

Carnufex lived just before the appearance of the first dinosaurs, which started as modest creatures in the Triassic before becoming Earth’s dominant land animals. Zanno said Carnufex’s discovery underscores the notion that before dinosaurs became well established in North America, such crocs and their cousins filled the large predator roles.

While the dinosaur lineage eventually produced the world’s largest terrestrial predators, it was the crocs and their cousins that typically were the Triassic tough guys. A group related to crocs called rauisuchians included large four-legged land predators up to  8 meters in length or more.