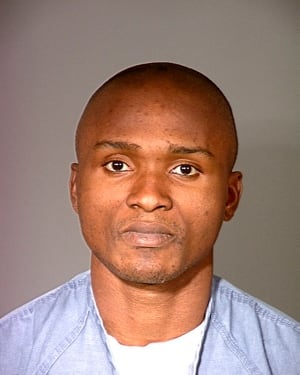 A homeless man who was shot to death by police during a confrontation over the weekend was identified under his true name — not the stolen identity he had used for years.

Charly Keundeu Keunang, 43, identified Thursday, was listed as being indigent and homeless, and he died from multiple gunshot wounds, according to the Los Angeles County coroner’s office.

Keunang, a native of Cameroon, was known on the streets as “Africa.” He was killed on Sunday by police officers answering a robbery report. Officers said he became combative, made a grab for the gun of a rookie policeman and was shot by three other officers.

The shooting was captured on video and prompted several protests.

Keunang’s path to Skid Row was marked by mistakes and miscommunication by three governments on three continents over nearly 20 years.

The man identified who was convicted for a 2000 bank robbery and pistol-whipping as Charley Robinet is Charly Keundeu Keunang. (Ventura County Sheriff’s Office Handout/Reuters)

The problems began in the late 1990s when French officials gave him a passport under what turned out to be a stolen name — Charley Saturin Robinet. He came to the U.S., robbed a bank and then was convicted and imprisoned under the same false name.

U.S. immigration officials wanted to send him back to Cameroon, but that country never responded to requests to take him. So he was released from a halfway house last May, and U.S. probation officials lost track of him in November.

It took three failed monthly check-ins for a warrant to be issued on a probation violation, and it’s unclear whether anyone actually looked for him. He apparently was living the entire time on Skid Row, roughly 50 square blocks of liquor stores, warehouses, charitable missions and a few modest businesses.

Many of the estimated 1,700 people who sleep each night on the sidewalks are mentally ill, like Africa.

Peter Nunez, a former U.S. attorney in San Diego who is chairman of the Center for Immigration Studies in Washington, D.C., said the case points to multiple failures by government.

Man whose identity was stolen was located in 2013

He criticized France for not being more diligent in investigating the man’s background before issuing a passport and U.S. authorities for not realizing he was a “fraud” before the end of his prison term and then not putting more effort into finding him once he disappeared.

“Shame on all of them,” said Nunez, whose group advocates for stricter immigration policies and enforcement.

Using the false name, the man was believed to be a French citizen in 2000 when convicted of robbing a Wells Fargo branch in Los Angeles and pistol-whipping an employee in what he told authorities was an effort to pay for acting classes at the Beverly Hills Playhouse.

In 2013, as he was nearing his release from a federal prison in Rochester, Minnesota, French officials found the real Robinet in France, Cruau said. U.S. Immigration and Customs Enforcement then determined the imposter actually was from Cameroon, but the agency said the African country ignored repeated requests for travel documents, hampering efforts to deport him.

The U.S. Supreme Court ruled in 2001 that immigration authorities cannot detain people indefinitely just because no country will take them. Justice Stephen Breyer wrote that the government would need a special reason to keep someone in custody after six months if deportation seemed unlikely in “the reasonably foreseeable future.”

The man was in immigration custody in September 2013 when a federal judge in California ordered him to a halfway house in Los Angeles. He was released from the halfway house in May, said Ed Ross, a spokesman for the Bureau of Prisons. His sentence included three years of supervision by federal probation officials.