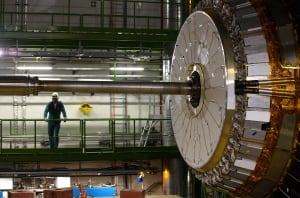 Scientists will be watching for the existence of mini black-holes when the Large Hadron Collider (LHC) particle accelerator becomes fully operational this spring, because the detection of those black holes could change what we know about how gravity works, according to a new physics paper.

The existence of the mini black holes would lend support to string theory, which posits that different dimensions could exist and parallel universes are possible, according to a paper by physicists Mir Faizal, Mohammed M. Khalil and Ahmed Farag Ali, published in the current issue of the journal Physics Letters B.

“That’s something I’m really, really waiting for, because if it does come out in our energy scale, then we know we’re using the right theory,” said Faizal, who is a visiting professor in the physics and astronomy department at the University of Waterloo.

While scientists have looked for mini black holes before at the LHC, located near Geneva, Switzerland, they haven’t been able to find them. Faizal suggests in the paper that may be because they didn’t take into account the theory of rainbow gravity. According to his calculations, it could be possible to detect those black holes when the LHC starts up again, now firing subatomic particles together at almost double the energy level it did before.

The detection of black holes during these exercises would prove the existence of other dimensions and the rainbow gravity theory, he said.

A technician stands near equipment of the Compact Muon Solenoid (CMS) experience at the LHC particle collider. Denis Balibouse/REUTERS (REUTERS)

The rainbow gravity theory holds that because all of the wavelengths of light have different energies, gravity would affect each of them a little differently.  Red light, for instance, travels at a different speed than violet light, and under this theory, would be affected by gravity differently.

“So if a particle has more energy it will see spacetime curving differently from a particle with less energy. In other words what we are seeing is gravity acts differently on particles of different energy,” said Faizal.

Part of the reason mini black holes weren’t detected previously is due to the fact that the massive amount of energy thought to be required to create them is larger than anything the LHC could produce, said Faizal.

But according to the rainbow gravity theory, if other dimensions exist, it’s possible that gravity could “leak” into other other dimensions, lowering the energy required to produce a mini black hole.Furthermore, the LHC will running at a much higher energy level than it had before.

“So if LHC operates at that [energy level]– we will know that rainbow gravity is correct, and that extra dimensions and parallel universes are correct,” said Faizal.

The LHC, located outside Geneva, Switzerland, was shut down about two years ago, after a three-year operational run. When it resumes operation again this year it will operate at nearly double the energy levels it did previously.

On Tuesday, Reuters reported that a spokesperson for CERN, the group that runs the LHC, said the restart will be delayed as they try to remove a small piece of metal near a magnet in the accelerator. The delay could take a few days, if it’s easy to remove the piece, or five weeks if more repairs are required.

If Faizal and his colleagues are correct,  it would present a great leap forward for physics, says Damian Pope, an outreach physicist with the Perimeter Institute for Theoretical Physics in Waterloo, Ont.

“The Large Hadron Collider might provide observations, fingers crossed it will, which will allow us to fix our current physics.  And this is a big thing, because we’ve had…in the particle physics, the same physics for the last 30 years, basically. Not that it’s stagnated but there’s been no big, huge leaps,” said Pope.

Pope says that there have been two major breakthroughs for humanity’s understanding of gravity: the first when Isaac Newton developed his theory of gravity toward the end of the 17th century and the second with Einstein’s theory of general relativity in 1915.

“Potentially this kind of theory of these extra dimensions might potentially be on that level, so it’s very, very important from a fundamental, scientific point of view,” said Pope.

“The Large Hadron Collider was designed to actually find out what the next big leap in our understanding of the basic building blocks that make up everything in the universe, because that’s what particle physics is about.”

Why are we looking for mini-black holes and are they dangerous?

The idea of creating mini-black holes seems dangerous on its surface.  We usually think of black holes as supermassive entities that suck in all mass in their paths, even light.

But the mini black holes that could be produced – and they may not be – at the LHC would be temporary.

“They’re very, very, very tiny, it could be a couple of millimetres or even much, much smaller than that, said Pope