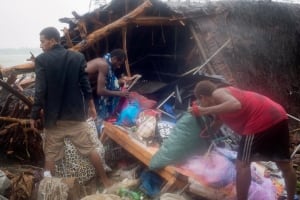 One of the Pacific Ocean’s most powerful storms ever devastated the island nation of Vanuatu on Saturday, tearing off roofs, uprooting trees and killing at least eight people with the toll set to rise, aid officials said.

The United Nations was preparing a major relief operation and Australia said it was ready to offer its neighbour whatever help it could.

With winds up to 340 km/h, Cyclone Pam left Vanuatu cut off, with little power, poor communications and a looming threat of hunger and thirst.

Unconfirmed reports said the number of dead could run into dozens but aid workers said it would be days or weeks before the full impact was known.

“It felt like the world was going to end,” said Alice Clements, a spokeswoman for the UN Children’s Fund (UNICEF).

Tom Skirrow, country director for the Save the Children aid group, told Reuters that Vanuatu’s National Disaster Management Office had confirmed eight dead and 20 injured. He said he expected those figures to rise substantially.

Aid workers in Papua New Guinea said at least one person had been killed by the storm there.

Satellite photographs showed the storm covering virtually all of Vanuatu, a sprawling country of 83 islands and 260,000 people 2,000 kilometres northeast of the Australian city of Brisbane.

Australian Foreign Minister Julie Bishop said Canberra would be willing to offer Vanuatu whatever help it could.

Formerly known as the New Hebrides, Vanuatu was jointly ruled by France and Britain until independence in 1980. It is among the world’s poorest countries and highly prone to natural disasters, such as earthquakes, tsunamis and storms.

Witnesses described sea surges of up to eight metres and flooding throughout the capital, Port Vila, after the category 5 cyclone hit late on Friday.

Aid officials said the storm could be unprecedented in the island’s history and one of the worst natural disasters the Pacific region has ever experienced.

They said the storm was comparable in strength to Typhoon Haiyan, which hit the Philippines in 2013 and killed more than 6,000 people.

Chloe Morrison a spokeswoman for the World Vision aid group said the storm had been terrifying.

Power remains out across the tiny Pacific archipelago and people on many of the outer islands have no access to running water or outside communications. (UNICEF Pacific/Associated Press)

“Trees are across the roads. Some of them are piled up so you can barely see over them,” she said. “There are reports that there have been casualties across all of the islands.

“This is going to need a long and sustained response. People in Vanuatu are subsistence farmers. They grow food for their own consumption. Crops will be absolutely wiped out from this.”

Outlying islands may take weeks to reach, aid officials said, while a lack of clean water and widespread damage to crops meant the situation could deteriorate sharply in coming days.

There were no reports of looting but Skirrow described men whose homes had been destroyed walking the streets of Port Vila with machetes and families huddling without shelter after their flimsy homes of thatch were torn away by the wind and rain.

Many residents were in evacuation centres, he said, but the authorities were ill prepared.

As darkness fell on Saturday, the storm was moving off to the south but the wind was still strong.

UN relief workers were gearing up for a rapid response on Sunday, with members drawn from as far away as Europe.

However, with the airport closed and high wind still blowing it was not clear how they could reach Vanuatu.

Sune Gudnitz, regional head of the U.N. Office for the Coordination of Humanitarian Affairs, said sending in military aircraft was an option, possibly from Australia.

“We fear the worst,” said Gudnitz.