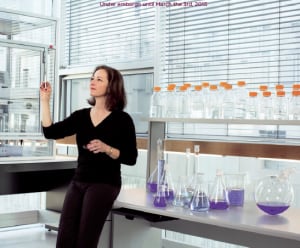 A University of Toronto researcher has won a prestigious award recognizing the top women in science around the world.

Molly Schoichet is a polymer scientist and engineer who takes a “pioneering approach” that could lead to “truly miraculous cures” for problems like spinal cord injuries that paralyze people, says an announcement from the L’Oreal Foundation naming her a winner of the 2015 For Women In Science Awards.

Schoichet is one of five women around the world being honoured with the awards this year, which each come with a $139,633 grant. They will be presented at a ceremony in Paris on March 18.

The awards, given out annually since 2008 aim to identify and support top women scientists, recognize their scientific accomplishments, and increase their visibility. One of the program’s goals is to encourage young women to pursue careers in science and engineering.

One of Schoichet’s biggest scientific achievements is inventing a new way to deliver drugs to the spinal cord and brain to prevent damage and promote recovery after injuries such as a stroke.

But she’s not stopping there. Her ​”pioneering approach” is generating new materials to regenerate nerve tissue damaged by problems such as strokes and spinal cord injuries, L’Oreal says.

Schoichet’s goal is to overcome a major hurdle “that could lead to truly miraculous cures” by keeping stem cells alive long enough to integrate into the nervous system using new, high-tech materials, the company adds.

She’s also developing new materials in which to package existing drugs to make sure they get to the right place at the right time.

Schoichet describes her lab as the “FedEx of drug and cell delivery.”

For example, the way they’re typically delivered, chemotherapy drugs to kill cancer do a lot of collateral damage to healthy cells – one of the reasons they cause so many side effects. Schoichet said her research team is trying to package the drugs in such a way that they get directly to the cancer cells.

One material invented in her lab is similar to jello that can be infused with drugs injected using a syringe directly on top of the brain or spinal cord to treat conditions such as a stroke. Delivering drugs to those areas are normally difficult because of a mechanism designed to protect the brain from toxins. The protective blood-brain barrier stops drugs that people swallow as a pill, for example,from getting to the brain and spinal cord.

Delivering the drug by syringe has been shown to stimulate stem cells in the brains, helping people recover, Schoichet says.

Schoichet said the For Women in Science award’s recognition of women pushing the boundaries of science is fantastic, and represents the international community trying to tackle a problem together — the underrepresentation of women in science and engineering. According to 2014 statistics from UNESCO, women make up 30 per cent of the world’s researchers.

Molly Schoichet is one of five women around the world being honoured with this year’s L’Oreal/UNESCO For Women in Science Award, which comes with a $100,000 grant. (University of Toronto)

Schoichet says that in many parts of the world, that’s because men and boys are valued more, and women don’t have the opportunity to get an education.

In Canada, she said, girls are lucky to grow up in a more supportive environment. She says she thinks the main barriers here are a lack of encouragement from peers and parents.

Jennifer Logie, a Ph.D. student in Schoichet’s lab, said Schoichet is more than a professor and an amazing researcher.

“She’s a mother, she has a social life as well,” Logie said. “I think it’s important to have those role models to show, especially younger girls, that its possible to have everything, in that sense, and still go into a career like science engineering.”

This year’s For Women in Science awards are focused on the physical sciences, where women are particularly underrepresented.

The other four winners this year are:

The award-winners are chosen from nominations around the world by an international jury of 13 “eminent” scientists including a Canadian, University of Toronto chemistry professor Mitchell Winnick. One award is given to a scientist from each of five world regions: Africa and the Arab states, Asia-Pacific, Europe, Latin America and North America. So far, 87 women have received the award, including two who went on to win a Nobel Prize.