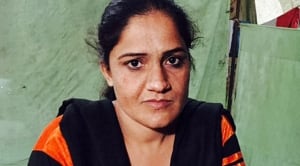 She’s about to mark another anniversary sitting under the flimsy tarpaulin in front of her tent: It’s been near three years since she made protesting a full time endeavour.

Kaur insists she was raped by a police official in her home village in Punjab — a rape she says no one will acknowledge.

So home, now, is a tent on Delhi’s Janta Mantar street – the city’s acknowledged protest zone.

Kaur was once on a hunger strike, she’s written to a huge array of officials, been interviewed by many journalists. She’s even had local reporters poke serious holes in her story, claiming she is a fake.

What she’s never managed to do is file a police report, which is now required by law any time a woman alleges rape.

She is blunt about the downsides of speaking up.

Jagit Kaur lives in a tent in Delhi and insists she was raped by a police official in her home village. But despite India’s new rape laws, police won’t register her case. (Nahlah Ayed / CBC)

“If a woman comes out and fights for herself, she will not get justice in India,” she says. “I don’t think any girl should come out and fight like this.”

“She will have to pick up a gun to get revenge.”

It’s a shocking conclusion to be sure. But even those who doubt her story point to her case as an example of the precariousness of the legal advances made here in India in the past two years as far as prosecuting rape is concerned.

Many women allege police will still dismiss their allegations and refuse to register cases. Other cases get thrown out of court because of lack of proof, or shoddy forensics.

Fast-track courts have been introduced to handle rape cases, but they have yet to mete out a final punishment. Not even in the case that started all this hoped-for change.

The convicted rapists in the December 2012 gang-rape on a Delhi bus — an incident that shocked the world — have been sentenced to death, and admittedly, relatively quickly by the normal standards.

But their case is still before the courts because of appeals.

“The laws have only changed on paper, nothing in terms of implementation,” the mother of the 23-year victim in this case said in an interview.

“I now have doubts about whether we will get justice or not.”

Back when Jantar Mantar was teeming with angry women demanding change in the wake of that savage Delhi attack, the stay-at-home mother stayed out of view, grieving for the gifted girl she had just lost.

The 23-year-old, nicknamed Nirbhaya to comply with the continuing ban here on naming her (which also prevents her parents from being named), was a physiotherapy intern who spoke excellent English and had apparently worked at a call centre that handled mortgage questions, largely from Canadians.

Two years later, her mother still grieves but she has taken the podium, literally. 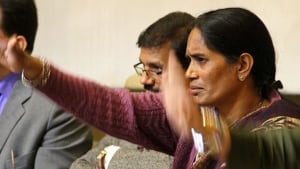 After months of silence following her daughter’s brutal killing, the woman known in India as Nirbhaya’s mother is finally speaking out. (Nahlah Ayed / CBC)

We caught up with her at a meeting organized by the trust she has set up to help women take their rape complaints from the shadows to the courts.

She was the first speaker at the gathering that brought together judges, doctors, lawyers, activists and others to discuss the loopholes that still allow suspected rapists to walk.

The justice minister was invited, but couldn’t make it, his officials said.

“If a minister can’t take five minutes, I wonder what will he do to help?” asked Nirbhaya’s mother.

With a new, majority government taking over last year, India seemed poised to begin wrestling with how women are treated here, and with the underlying inequity.

So protracted a problem, it featured prominently in the new prime minister’s first Independence Day speech last year. Narendra Modi spoke of the urgent need to make toilets available for women everywhere. And of the need for parents to teach boys to respect women.

He spoke of India’s shame at the rapes women are increasingly enduring — and reporting.

Modi kicked off this year by launching a campaign to address India’s alarmingly skewed sex ratio — brought on by the continued abortion of female fetuses (which persist because the existing law against female feticide is poorly enforced). 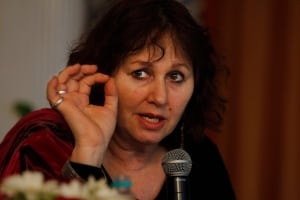 Modi’s slogan Beti bachao-Beti padhao — Save the girl, educate the girl — is a bold plan, easy to say but far harder to embed in the psyche of those raised to believe girls are of little value.

Rape “happens in schools, cabs, while playing outside the house, and if a girl comes back late from work, at nine, then it happens with her as well,” said Nirbhaya’s mother.

“So change the mindset behind it, and the judicial system and the police. It is only then something will happen, otherwise, it will merely remain a slogan.”

It is, partly, that mindset, the deeply embedded attitudes that are presumably getting in the way of the necessary progress, legal and otherwise.

These are the attitudes that were highlighted in the BBC documentary the Indian government banned last week in a move many here found surprising, especially given Modi’s apparent openness on the subject.

There are still reasons for optimism. That Nirbhaya’s mother chooses to fight now speaks to both stagnation, as well as progress: She has, after all, turned activist in search of legal solutions.

And, along with her husband, she visits the slums of Delhi, where rape is rampant and complaints are often ignored. She helps give the overlooked women there a voice. Perhaps get their cases registered.

Is it a fight they will win? Her husband is more optimistic than she is.

“Of course it will happen. If there is night, there is also morning,” he says. “We will fight until we see some light.”