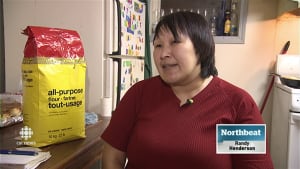 In her Cambridge Bay kitchen, Jessie Tologanak says Inuit come from a tradition of sharing.

Tologanak has gone online, in a local Facebook group designed to connect people in need with donated goods like clothes and food, and offered to help local women learn how to make bread.

“It’s a part of who we are, bread, bannock. It’s a staple,” she says. “Someone always needs bread.”

Tologanak’s mother taught her how to bake. She also received formal training from the Northern Alberta Institute of Technology.

Jessie Tologanak says Inuit come from a tradition of sharing. ‘Now with Facebook, we can bring it back.’ (Mitch Wiles/CBC)

She says her grandmother stressed to her the importance of passing on skills and knowledge to the younger generation.

She’s used her Facebook group to connect with several young people who have limited, or no, baking skills at all.

“If I can pass on the skills to someone else, and they can pass it on to their friends or their families, then I did a good thing.”