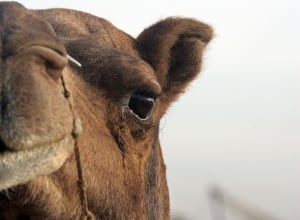 A discovery by an Alberta schoolteacher may have revealed where ancient camels and horses met humans for the first time in North America.

The prehistoric horse and camel butchering site discovered by Shayne Tolman at Wally’s Beach, Alta., is unique on the continent, and the only direct evidence found in North America of people hunting horses and camels.

“We’ve got the stone tools and we’ve got the cut marks on camel and horse bones and little packages of bone – it looks like they’ve been cut up into roasts,” says Brian Kooyman, a University of Calgary archeologist who helped excavate the site.

‘It must have looked like the Serengeti plains of Africa.’—Shayne Tolman

Now, based on new radiocarbon dating analysis, it turns out that the site is even more special. It represents some of the only evidence ever discovered about the lives of the mysterious early North Americans who lived before the “Clovis culture.” The Clovis culture, which emerged around 13,000 years ago, is well-known to archeologists, who identify it by the characteristic style of spear points they left across much of North America.

The Wally’s Beach archeological site is normally at the bottom of St. Mary’s reservoir, under two or three storeys’ worth of water. But every several years during a dry winter, the water level falls low enough to expose the soil.

It was during one of those times in 1996 when Tolman, who teaches at Westwind Alternative School in Cardston, Alta., decided to hunt there for archeological artifacts. He knew that the winter winds whipping across the reservoir were stripping away the soil and might expose something interesting.

Braving the harsh winter weather turned out to be worth it. On his first visit, Tolman made an exciting discovery — an ancient spear point.

But that was just a beginning. On subsequent visits with his family, he came across a gravel bar littered with spear points, dart points and arrowheads, along with ancient animal bones.

“That first weekend … we picked up about 80 projectile points,” Tolman told CBC News. Even more exciting was the fact that the first one he picked up showed characteristics of being from the Clovis culture. “In Alberta, we don’t have many exposures, if any really, that date back that far.”

Over two years, he collected about 3,000 artifacts and bones. Eventually, geoscientist Len Hills and Kooyman at the University of Calgary heard about it and got involved in excavations.

Not only was the site rich in archeological artifacts and bones, but it was also covered in tracks of animals, including horses, camels, muskox, caribou, mammoths and bison. It seems it was once a popular river crossing in the middle of a vast grassy steppe roamed by huge herds of grazing animals. 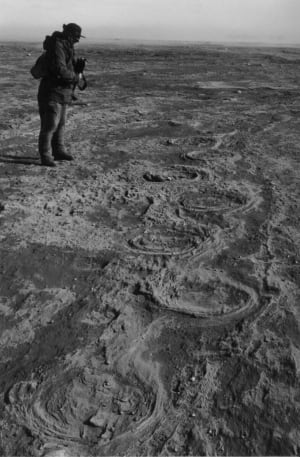 “It must have looked like the Serengeti plains of Africa,” Tolman said.

Preliminary radiocarbon dating suggested the site dated to Clovis times, but Michael Waters, an anthropologist at Texas A&M University, suspected that they could be older.

He contacted Kooyman and offered to test the samples using a rigorous technique to remove any possible contamination.

The results, published this week in Proceedings of the National Academy of Sciences, showed that the horses and camels were killed and butchered 300 years before the Clovis culture arose – that is, they were from a time that archeologists know very little about.

Humans in north, horses in south

Kooyman said the Wally’s Beach site likely represents some of the first encounters between humans and grasslands animals such as horses and camels. Those animals were trapped south of the ice sheet that covered most of Canada during the last ice age. That same ice sheet is widely believed to have kept them separated for thousands of years from the humans who had crossed over from Asia on the Bering land bridge, around 15,000 years ago and had been making their way southward along the west coast ever since. 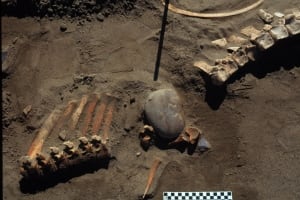 “When you put those dates in the context we have now, it’s really incredible,” Kooyman said.

He added that the site shows that the people who lived before the Clovis culture used different hunting technology and hunted different animals — the Clovis people hunted mammoths and bison, but not horses.

Waters said the research also shows that humans had been hunting horses and camels for 2,000 years before they went extinct in North America. While climate change is thought to have played the biggest role in wiping out those animals, the Wally’s Beach evidence suggests that human hunting was also a factor.

Tolman is thrilled by the new findings.

“That’s one of the big questions: When did humans first occupy this land and where did they come from?” he said. “To push those dates back beyond Clovis really opens a lot of doors. I’m really very excited about it because it means that we’re looking at the first human occupation in Alberta.”

He added that it’s an amazing feeling to pick up a prehistoric spear point and to know you are the first person to touch it since the person who made and used it so many thousands of years ago.

“There’s a story there,” he said. “To me, time disappears when we pick up that projectile point. We’re seeing those things as they were laid to rest. It’s really a remarkable thing to be involved in.”