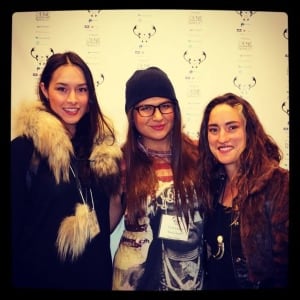 Last week in Milan, Italy, two Canadian twins who live and work in the rarefied orbit of the international fashion industry released a clothing line that appropriated aboriginal design. They then went a step further and used the racist hashtag #dsquaw to promote their new line. I’m not using their names because I don’t want to draw attention to their work. That is, I guess, what they’re hoping for. I also hesitate to repeat the racist hashtag, but that’s important context. It was a jumping off point for a week-long learning experience I’d like to share here.

As a way of moving past the hashtag and the media attention the twins attracted, I put a question out online: “Who are the Northern designers we should know about and celebrate?”

The response to that question was awesome. Names of designers and images of their work poured in. The good news? There are too many talented designers in the North to showcase them all.

Here are five designers whose stories offer lessons in our connection to the land, to culture, to our relations, and in how to be self-reliant. We can speak about all of those things without as much depth or context as they deserve. But the stories these designers collectively shared are deep and soulful, especially in the shadow of the negative fashion stories from last week. Moving past a racist hashtag never felt so good.

Tania Larsson, centre, is Gwich’in and Swedish, and works by reaching back into Gwich’in traditions and then interpreting them with modern technology, like 3D printing. (Facebook)

Larsson is Gwich’in and Swedish and she grew up in Europe with roots in the Mackenzie Delta. She is reaching way back to Gwich’in traditions and then interpreting them with the most modern technology, tanning moose hides and designing pieces to be produced on a 3D printer. The point Tania made that stayed with me is that connecting with her Gwich’in heritage, the skills, the values, has actually been hard. Not hard in a negative sense; rather, that it has taken time and work. “I’m really trying to learn what we did before contact and to reintroduce it my own artwork,” she told me. Larsson made me reflect on the commitment and authenticity behind the most soulful indigenous design. 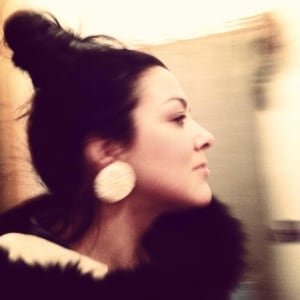 Adina Tarralik Duffy, from Coral Harbour, Nunavut, recently wrote an award-winning short story: “Don’t Cry Over Spilled Beads.” The story, and its title, hang on one of the many lasting lessons her late grandmother taught her. Adina’s design company is called Ugly Fish, a reference to the Inuktitut nickname her grandmother had: kanajuq, or ugly fish. The meaning of the name, her grandmother figured, was that she always spoke her mind, with a big mouth like a fish. For me, it makes me think of the thread between grandmother and granddaughter; the passing down of skills and knowledge. It also makes me picture Adina walking along the beach picking up beluga vertebrae to incorporate in her jewellery design.

You can read Adina’s story on Up Here magazine’s website. 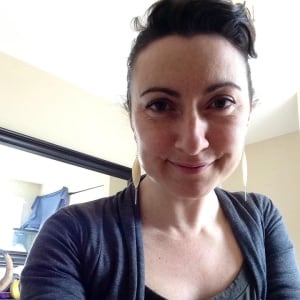 Jamie Look, born and raised in Yellowknife, says that she is in a mutual relationship with the hunters and trappers she gathers materials from: she gets to design and market her pieces, while they get to hunt and live on the land. (Facebook)

Yellowknife born and raised Jamie Look says her favourite material to work with is muskox horn. When I spoke with her, she described a piece she created: slinging together 60 circular discs of muskox horn into a triangle that hangs from someone’s neck. It’s breathtaking. What stood out for me about Jamie is her purpose-driven connection to where her materials come from. She is in a mutual relationship with the hunters and trappers who gather her natural materials. While someone in Montreal or New York wears one of Look’s pieces, a hunter and trapper continues to live on and with the land. 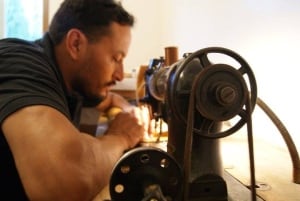 The only male designer we spoke with, D’Arcy J. Moses, has had an incredible journey in fashion design. He has worked in the glamorous, grinding world of big fashion, at one time designing lines for the high-end U.S. luxury department store Neiman Marcus. Then, he took a so-called sabbatical: 10 years, living and working in Wrigley. D’Arcy has just returned to his home community of Enterprise, N.W.T.. And he’s returned to fashion, full-time. I can’t forget a scene he described: “I do see interest in youth for more Northern inspired fashion, and mostly it’s on the backs of young handgames players.” For me, that scene symbolizes indigenous resurgence and power. 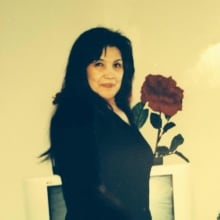 Berna Beaulieau, from Behchoko, N.W.T., has more of a purpose than just creating clothes she’s “hoping to create more jobs, especially for single parents who are struggling.” (Facebook)

Berna Beaulieu, from Behchoko, N.W.T., is the elder designer of the group I spoke to. But that doesn’t mean she’s done learning. After a lifetime of creating clothes, she returned to school in Saskatoon to earn a post-secondary diploma in fashion design. Rather than change her traditionally influenced design work, her education gave her a sense that she was ready to teach. And to pass along a profound survival gift that her design work as a home business always gave her: “I’m hoping to create more jobs, especially for single parents who are struggling,” she told me. “Because I had struggled for so long, I know what it’s like.”