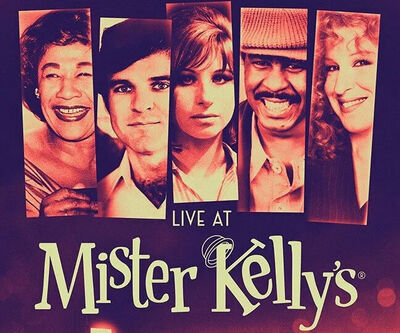 An exclusive one-hour sneak preview of Ted Bogosian’s “Live at Mister Kelly’s,” the made-in and made-about Chicago documentary film, will have its world premiere at 8pm, Thursday, May 27, on WTTW, Channel 11. The legendary nightclub Mister Kelly’s, called a “supernova in the local and national night-life firmament,” illuminated legendary Chicago’s Rush Street and the entire country. The movie has tantalizing live footage of performances and interviews of many who were at the heart of Kelly’s success.

This special look at the upcoming film will also be televised at 6am Friday, May 28, on WTTW Prime; 12:30 am Saturday, May 29th on WTTW; and 10 pm Sunday, May 30 on WTTW. It will be available only to viewers in WTTW’s broadcast region, after which a full-length, 80-minute version will premiere nationally in the fall.

“This showing on public television is a way we can give something back to the people of Chicago, who came together and celebrated diversity, great jazz, and great comedy,” said executive producer David Marienthal. “Our city was the entertainment epicenter of the country during that time and my father and uncle built an unrivaled talent incubator.”

David is the son and nephew to the late Marienthal brothers, George and Oscar, who conceived and operated three ground-breaking nightclubs. The London House was opened in 1946, followed by Mister Kelly’s in 1953 and the Happy Medium Theater in 1960. These venues launched the careers of such stars-to-be as Barbra Streisand, Bette Midler, Herbie Hancock, Ramsey Lewis, Lenny Bruce, Lily Tomlin, Mort Sahl, and Joan Rivers. Over 30 live albums were recorded at the clubs including recordings by such immortal artists as Billie Holiday, Oscar Peterson, Ella Fitzgerald, Sarah Vaughan, the Smothers Brothers, Freddie Prinze, and Flip Wilson.

The filmmakers drew on a comprehensive archive Marienthal has assembled and donated to the Newberry Library’s permanent collection. More than 100 interviews, recordings, photos, and memorabilia tell the story of the movements for free speech, civil rights, women’s liberation, and anti-war that happened alongside the fabulous entertainment. The archive will be curated by the Newberry and presented in part as a major exhibit with public programs in 2023. Non-profit partners include ChiArts and the Jazz Foundation of America.

Theodore Bogosian, the film’s writer and director, is an award-winning independent filmmaker and television producer who has been directing, producing, and writing scores of long-form documentaries for PBS, the New York Times, Discovery, and other networks since 1978. The editor and producer, Scott Dummler, is currently the producer, director, and editor of Chef Rick Bayless’s public television cooking show “Mexico: One Plate at a Time,” work that has gained him two national Emmy nominations.He has also directed, produced and edited programs for “Ebert Presents At The Movies.”  Adam Carston is the senior researcher and associate producer. For more information, visit the film’s official site.