While Michael Bublé‘s only daughter isn’t even 2 years old yet, she’s already showing her singing chops.

The Grammy-winning crooner was in the middle of a daily Instagram Live with his longtime wife, Luisana Lopilato, on Tuesday when the youngest member of their family made an impromptu appearance. While it’s not often fans see the couple’s daughter, Vida, who turns 2 in July, she popped up in their livestream and simultaneously proved to be just like her famous dad when she joined in with some of the words as he sang Camila Cabello and Shawn Mendes‘ “Señorita.

Then, as he got warmed up for their workout, Vida filled in a few words as her dad belted out Reel to Real‘s “I Like to Move It.” Just like that, a pint-sized star was born! 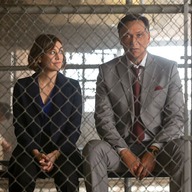 More recently, the couple was in the headlines after people took issue with how the performer had treated Lopilato in some footage. However, the actress defended her husband against the accusations.

“It’s incredible how some people are!! While we are in the middle of a pandemic, and living our lives under quarantine, angst, fear, loneliness, and uncertainty of all kinds! [I] come out every day with my husband to try to do [social media] lives to bring some happiness, entertainment, longing, and we have to put up with, hear and see what people with ill intentions are posting without knowing anything about our family,” she said in a statement on Instagram, translated to English by Hola!

“After all the pain that we have experienced, I want you all to know that I have no doubts about who my husband is and that I would chose him again a thousand times over!! It’s not fair! This person is causing harm and taking advantage of this pandemic where people are suffering, dying and under quarantine, to gain fame and more followers. They are sharing lies and that I will not allow because they are disrespecting my family, so I ask all of you who have trusted me for years to not allow this either!”

Joseph Gordon-Levitt’s Mr. Corman is a Misguided Attempt to Finger-Wag…