All over Instagram, women are wearing wigs. Every weekend, it seems, new images scroll by showing cliques mugging in technicolor bobs, synthetic bangs grazing eyelashes. In the center of every photo is one woman whose wig is slightly better than the rest. Maybe it’s a different color, maybe it’s waist length. Anything to distinguish her, because she is the bride and this is her bachelorette party.

Jessica Reese O’Rourke was in the center of one such photo in 2018. Staunchly opposed to subjecting her friends to the horror of matching commemorative T-shirts, O’Rourke, now 28, wanted to maintain some element of cohesiveness when she and her crew took to New York City to celebrate her final days as a single woman. She can’t remember where or when she first saw colorful wigs as a bachelorette party essential, but she considered it the perfect alternative to custom sashes or vulgar flair like the curiously enduring penis straw. So she instructed her friends to purchase a wig of their choice and bought her own—a $60 aquamarine bob with bangs from a shop in her hometown of Seattle—and schlepped it across the country for a night of dancing at Brooklyn’s House Of Yes. Among both spectators and attendees, the wigs were a hit.

“I think people dread bachelorette parties because they’re expensive and they have to wear stupid shirts and sometimes there’s a lot of drama with a lot of women,” O’Rourke says, “but I think that the wigs help get people excited. [It customizes] the party for themselves and helps them realize its also about them.”

As bachelorette parties evolve into days-long affairs featuring ironclad itineraries and enforced dress codes, bold wigs have become an easy—some might say “chill”— way for the bride to lean into the tradition of the bachelorette uniform without making her friends parade around in something embarrassing or overly expensive. 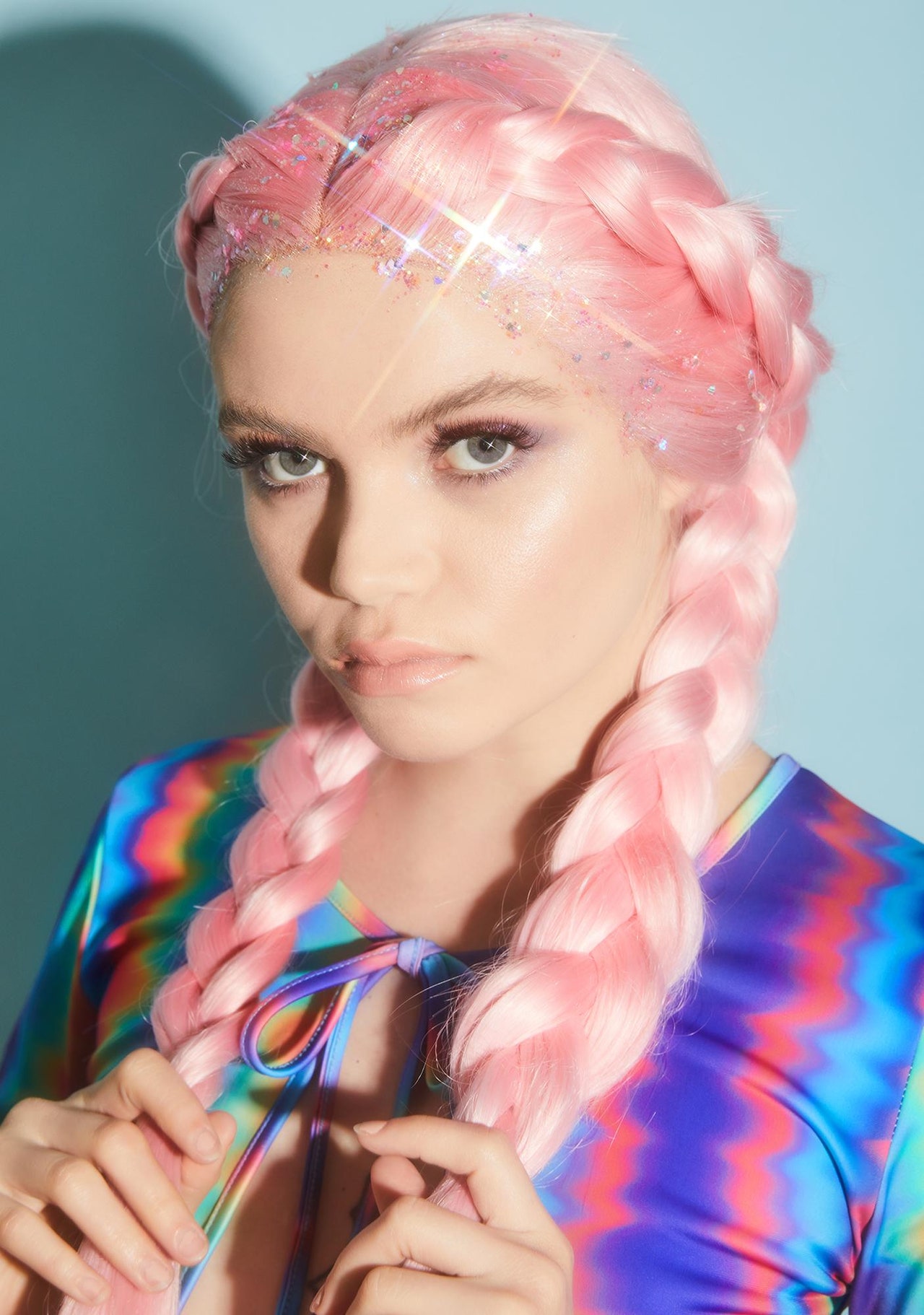 If you Google “bachelorette party wig” you’ll see an Etsy link for a $25 six-pack of neon bobs, while on Amazon the options are seemingly endless. Pinterest is packed with wigspiration for bachelorette party-goers. Even the actress Sophie Turner had her crew wore colorful wigs for her recent bachelorette party.

Women’s relationship to hairpieces have been a constant throughout history, but during the last few years, we’ve seen celebrities like Cardi B, Nicki Minaj, and Lady Gaga popularize candy-colored wigs as a low-stakes transformative experience. And brides-to-be are taking note.

“A wig theme creates mystery and allows you to tap into your ‘fun girl’ alter ego without taking away from who you really are,” says Dionna Merritt, the CEO of Los Angeles-based events company Celebrationz, who has planned bachelorette parties that have included wigs. “It’s a simple way to transform yourself from regular girl to party girl in an instant. The wig alone serves as the party-starter.”

An early depiction of bachelorette wig-wearing was in 2005’s 40 Year Old Virgin, where Steve Carell and Co. encounter an ensemble of women celebrating a bride-to-be — they all wore neon wigs. Nicole House held on to this image until her 2016 bachelorette party when she instructed 15 of her pals to wear wigs for a night out in New York City, where she lives. She spent $60 on her own waist-length pastel purple and blue hairpiece. The wigs were more attention-grabbing and had a higher likelihood for repeat-wears than the countless “Last Sail Before The Veil” T-shirts collecting dust in her pajama drawer. “I think everybody is trying to do something different with their bachelorette party,” the 31-year-old says. “This was one fun way to stand out among other groups.”

Small businesses have cashed in on the trend, packaging the wig shopping experience with bachelorette parties. Allyson Garro threw her first bachelorette wig party at her wig and costume shop Coco Coquette in Austin, Texas in 2010. A few months after her shop had opened that year, she suggested a friend who was hesitant about throwing a bachelorette party altogether host the gathering at Coco Coquette; the group could try on wigs and get their makeup done in a low-pressure environment. “At some point during the party,” Garro says, “the lightbulb went off. Like, oh my gosh, this is the thing. People are having so much fun.”