At this point, Shawn Johnson can sense when they’re coming.

Nearly four months into parenting daughter Drew Hazel East with husband of three-and-a-half years, Andrew East, the retired gymnast has deduced that mom shamers react to three types of content. “Car seats—we never talk about,” says the four-time Olympic medalist, noting they’ve been scolded for setting Drew’s seat on the ground, for letting her wear too many layers and the placement of the chest buckle.

Anything to do with head stabilization is also a no-no, she tells E! News, with people refusing to believe the infant has the neck strength to hold her head up. “And then Instagram has an affinity with socks,” she says. “If your baby’s not wearing socks, she’s always cold. She’s freezing.”

It’s enough to make anyone feel hot with rage, but Johnson manages to stay cool. Sure, it can be annoying when every Karen and Becky chime in (“When people now criticize us as parents, I feel like they’re criticizing our love for our child,” she explains), but the 28-year-old has learned to view the unsolicited advice for exactly what it is.

“You just kind of figure out that the mommy shamers are overly passionate moms themselves who have figured out something that works for them and now they’re preaching the gospel of it,” she explains to E! News. “So you have to take it with a grain of salt and be like, ‘Okay, it worked for you, it didn’t work for us, so we’re going to do this instead.'”

How’s that for poised parenting from a relative newbie?

Because weeks in, she and the NFL long snapper, 28, have already alighted on the top truism of raising children: Even the most polished of Instagram moms are just sort of figuring it out as they go along.

“We had a game plan going into pregnancy and birthing process and these early months of raising Drew,” East says, “we had our plan A. But I think the most valuable thing was for us to go through that planning process, just so we could get educated on all the different options because it’s not going to pan out probably like you think it will. So just to know, okay, this didn’t work, so let’s try this and that didn’t work, so let’s try this. Know what’s out there and go with what works for you.”

Never was that more true than when they began their feeding journey.

Johnson fully expected to exclusively breastfeed. Her new 8-pound, 8-ounce roommate had other ideas. With Drew struggling, their nursing sessions became a full-on wrestling match that left both sides in tears. So desperate to ensure her daughter was, you know, fed, she gave her bottles of pumped milk.

Imagine her surprise to hear that keeping her child alive was the wrong move.

Calling in reinforcements in the form of a lactation consultant, the Nashville resident was ready to get down to business and trouble shoot the situation. “But she was even kind of like, ‘Huh, well, I don’t know. Maybe we can try some stuff. What have you been doing?'” she recalls of the consultant. “And I was like, ‘Well, I bottle-fed her, because there was no way she was eating.’ And it was kind of like, ‘Oh, well you’ve probably already ruined it. I don’t think she’ll go back.'”

As the professional detailed all the mistakes she felt Johnson had made by feeding her baby, “I just felt sad because at that point, as a mom, especially that early on, you’re just trying to figure it out. You don’t know anything. You don’t know how to do anything. And I was trying to feed my kid and I was trying to keep her happy and make sure she was gaining weight,” she says. “And to feel like I had failed her, I felt so guilty and just defeated.”

Thankfully East wasn’t about to let the decorated Olympian take the L. Jumping into action, he rounded up a chorus of voices to reinforce the fed is best narrative—”I started talking to our pediatrician and nurses and friends and they were all saying, ‘Stop stressing. You don’t need to breastfeed. Pump. If you can’t pump enough, use formula.’ It was just so easy for them to say it,” says Johnson—and began doing his research.

One late-night whirlwind education in the importance of brain-building DHA, immune-supporting lactoferrin and MFGM, a component that aids cognitive development, they ended up with a pantry full of formula from Enfamil’s Enspire line and a full, happy baby. (A situation that made the brand’s later request seem meant to be. “They’re like, ‘Do you want to do a partnership?’ And we’re like, ‘Actually, you saved our life,'” recalls the Iowa native.)

The crash-course in nutrition was undeniably stressful, says Johnson, “but I think it was a good first thing for us to go through to kind of set up the whole kid thing because kids are complex.”

For every photo of the potential future gymnast on a balance beam, there are a handful or so mini meltdowns.

Like the time Johnson—with the aid of numerous calls to her pediatrician—couldn’t figure out what was making Drew throw up after each feeding. (Spoiler alert: bottle nipples have various flow sizes, a little-known fact she discovered the hard way.) Or those middle-of-the-night why-won’t-she-stop-crying moments “when it’s two a.m. and you’re both super tired,” recalls East, “and there are sound machines blaring and you can’t hear anything so you end up always being frustrated and mad at each other, really, for no reason.”

But even with all of that—and eye roll-inducing commentary from followers that inform her she doesn’t dress her daughter in enough pink (“Everyone believes that I truly wanted a boy because my baby shower was green and blue”)—parenting, for all of it’s literal and figurative messiness, has also brought this ineffable, sometimes bewildering sense of joy.

“I feel like people try to explain that love and affinity you feel for your kid, but you don’t get it until you actually have a kid,” says Johnson. Less than 24 hours into a lightening quick work trip to New York to sing her praises for Enfamil while her mom watched Drew, “My heart aches. And that’s for a baby—like a screaming, crying, drooling baby. I just, oh my god, I can’t get enough of her.”

In the thick of sleep deprivation and constant diaper changes, the hard parts can feel all-consuming, admits East. “It’s so much easier to share the hard parts. Like, hey, you’re not getting a lot of sleep or the baby is screaming a lot or it’s tough on, you know, the marriage. But it’s so hard to voice and convey the message of how awesome it is,” he says. “It’s like this ambiguous sense of fulfillment. And there’s nothing like knowing pretty much all the details of a human being and seeing them learn and grow.” 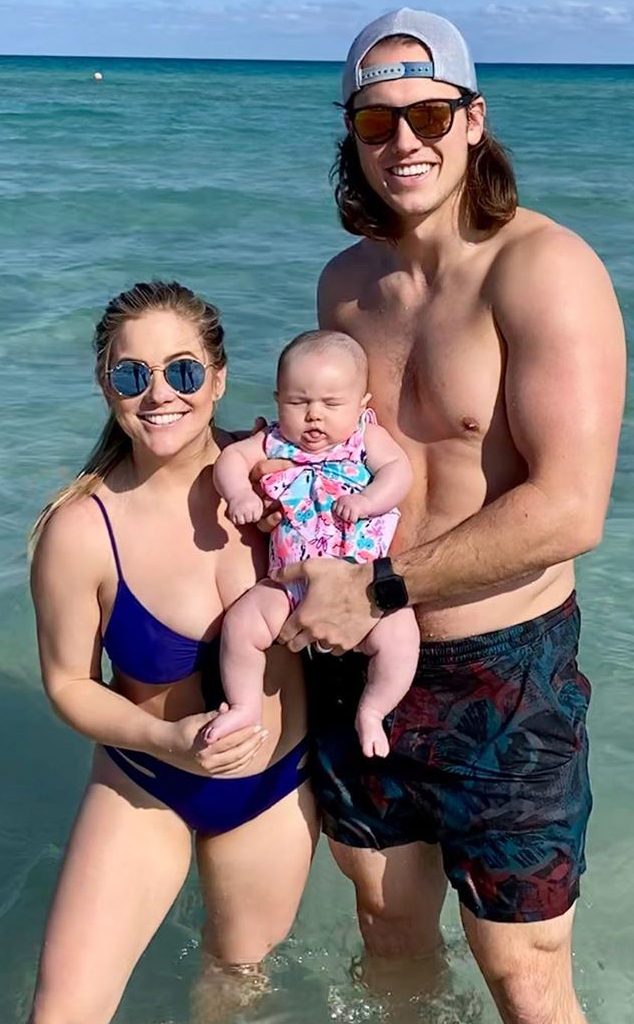 The Vanderbilt alum, who spent time with the Kansas City Chiefs, the Seattle Seahawks and the Oakland Raiders, has surprised himself with how fully he’s melted in his daughter’s presence. “I’ve already cried over her wedding and she’s three-months-old,” he marvels. “It’s crazy what it does to you. I never thought that I would be that dad and here we are.”

It’s statements like those that leave the 2008 Olympic all-around silver medalist confident that she nabbed a winner. “He’s the best father ever. I mean, I feel like we parent completely different, in different ways. And yet just watching him be a dad is so cool,” she says.

She likens it to getting a new view into how he treats her in their marriage. “You can never step back to see how your significant other loves you. You can feel it, but you can’t see it,” she explains. “And now being able to actually see him love someone and take care of a kid is so special.”

Well, that, and the way he talks about viewing his wife as a mother.

“It’s so awesome to see how willing Shawn is to sacrifice to provide for Drew in whatever sense,” he says. “It does just make you appreciate your spouse, because she’s giving all she has, all her energy to make Drew the priority. And I think it’s inspiring.”

(Excuse us as we weep silently, imagining the toast he could offer at his daughter’s future vows.)

Though father of the bride duties are still a ways off, each can’t help but imagine the next milestones that will leave them screaming with glee, the moments of wonder that make the rest of it more than worth it.

“We’re still waiting for the true belly laugh, she hasn’t done that yet,” says Johnson. “I can’t wait for her to stand for the first time and walk and travel and say her first word. I don’t think there’s one thing I’m most looking forward. It’s literally every little thing.”