It’s been two months since Kevin Hart was involved in a car crash.

On Thursday, Rebecca Broxterman, who was in the vehicle with Hart, took to Instagram to speak out about the incident.

“GRATEFUL and BLESSED,” she wrote alongside photos of her fiancé Jared Black, who was also involved in the accident, recovering in the hospital. “September 1, 2019 was the scariest day of my life. God was definitely watching over us that night and protecting us. Thank you, Lord, for wrapping your loving arms around us in our time of need.”

She then looked back at a post she wrote just weeks after the accident.

“First of all, I want you all to know that ultimately, all 3 of us in the car wreck are alive and recovering and that’s what matters the most! It is going to be a long road to recovery but we have the best support team,” she wrote in a post dated Sept. 17, 2019. “The scariest part for Jared and I was being separated after both being airlifted to UCLA. Just a lot of rest and physical therapy ahead for both of us! Jared is the strongest person I know and he will get through this. We still have each other and that’s what matters the most. This could’ve had a completely different outcome and we feel so blessed that it was not any worse. From the bottom of my heart, THANK YOU for all of the prayers, phone calls, texts and messages. It means the world to us that we feel so much love and support from you all at this time! I will keep you all updated as we embark on this new journey!”

Fast-forwarding to today, Broxterman then revealed they’re “feeling so much better.”

“We are both healing!” she continued. “Jared is well on the road to recovery after having major back surgery! We are doing physical therapy together a few times a week! Our relationship is stronger than ever and we have so much to be thankful for! Life can take you in many different directions and we are just so happy to be here for it all! We have felt so much love these past 2.5 months and that doesn’t go unnoticed! So thank you to each one of you! This is our journey… it will have ups and it will have downs but we will always have each other. @thejaredstanton I love you so much and am thankful that we are doing life together!”

In addition to sharing the heartfelt message, Broxterman, who is a friend of Hart’s, shared footage of herself walking with crutches and images from the crash.

The accident took place on Sunday, Sept. 1 on Malibu’s Mulholland Highway. California Highway Patrol told E! News Black was driving Hart’s 1970 Plymouth Barracuda at the time and turned from southbound Cold Canyon Road to eastbound Mulholland Highway. Black lost control of the car and the vehicle veered off the road—rolling down the northern embankment. Hart and Broxterman were passengers. The Highway Patrol also determined that Black was not “under the influence of alcohol at the time of the collision.”

Hart then left the scene and headed to his nearby residence to get medical attention. The other two occupants were trapped in the vehicle. Hart and Black sustained “major back injuries.” The Highway Patrol claimed Broxterman “suffered only complaint of pain.”

Hart then spent over a week in the hospital before undergoing physical therapy at a rehabilitation facility. The comedic actor also made it clear he had “nothing but love for Jared” and said he wished “him and Rebecca a speedy recovery.” 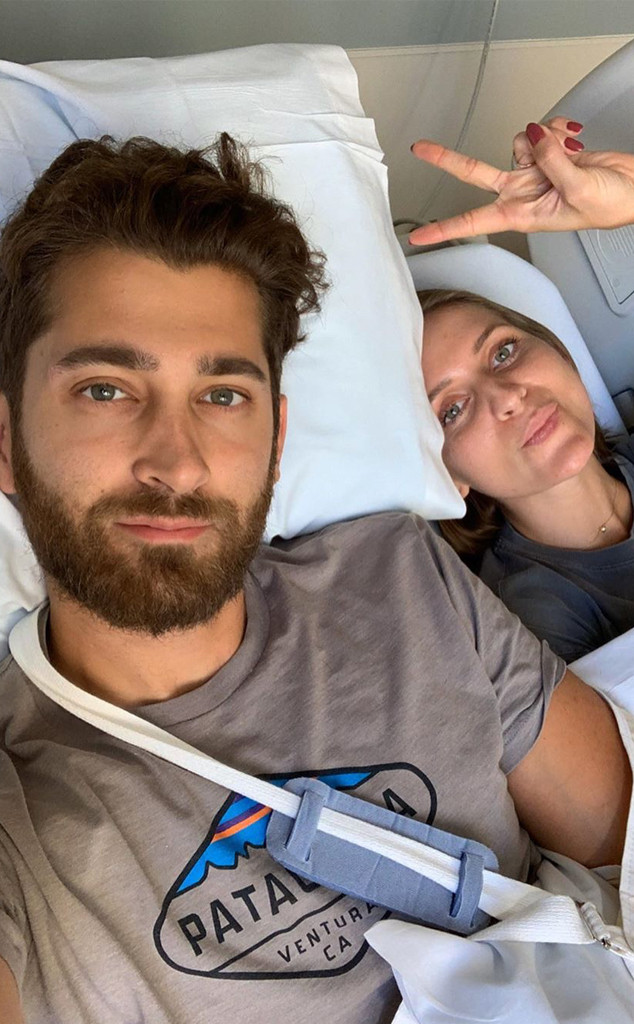 The 40-year-old star documented is road to recovery in an emotional video. He also made his first official public appearance since the crash at the 2019 E! People’s Choice Awards earlier this month.

“For me, I’m a different version of myself…This ain’t got nothing to do about going to church… It’s not spiritual, spiritual is the wrong word. You’re more present,” he said during a recent episode of his SiriusXM show Straight From the Hart. “More aware… It’s all a joke until you get smacked with that real life reality.”