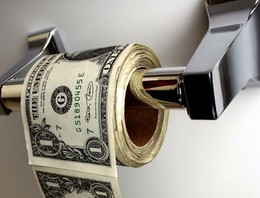 This review was originally published on April 9, 2011 and is being republished for Roger’s birthday.

“The upper 1 percent of Americans are now taking in nearly a quarter of the nation’s income every year. In terms of wealth rather than income, the top 1 percent control 40 percent.

“Their lot in life has improved considerably. Twenty-five years ago, the corresponding figures were 12 percent and 33 percent.”

So I discover in a piece by Joseph E. Stiglitz in the new issue of Vanity Fair. These facts confirm my impression that greed is now seen as a virtue in America. I’m not surprised by the greed of the One-Percenters. I’m mystified by the lack of indignation from so many of the rest of us.

Day after day I read stories that make me angry. Wanton consumption is glorified. Corruption is rewarded. Ordinary people see their real income dropping, their houses sold out from under them, their pensions plundered, their unions legislated against, their health care still under attack. Yes, people in Wisconsin and Ohio have risen up to protest these realities, but why has there not been more outrage?

The most visible centers of these crimes against the population are Wall Street and the financial industry in general. Although there are still many honest bankers, some seem to regard banking and trading as a license to steal. Outrageous acts are committed and go unpunished. Consider this case of money laundering by Wachovia Bank, now part of Wells Fargo. This Guardian article reports: “The authorities uncovered billions of dollars in wire transfers, traveler’s checks and cash shipments through Mexican exchanges into Wachovia accounts.”

The bank paid fines of less than 2% of its $12.2 billion profit in 2009. No individual was ever charged with a crime. We need not doubt that Wachovia executives received bonuses over the period of time when they were overseeing these illegal activities. Permit me to quote one more paragraph:

“More shocking, and more important, the bank was sanctioned for failing to apply the proper anti-laundering strictures to the transfer of $378.4 billion — a sum equivalent to one-third of Mexico’s gross national product — into dollar accounts from so-called casas de cambio (CDCs) in Mexico, currency exchange houses with which the bank did business.”

If a third of the Mexican GNP passes through your bank and you don’t ask the questions required by law, you are either (1) a criminal, or (2) incompetent. I can’t think of another possibility.

Stories like this have become commonplace. Two of the most common types of news stories about banks recently have involved their losses, and the size of their executive bonuses. Bloomberg News reports: “JPMorgan Chase & Co. gave Chief Executive Officer Jamie Dimon a 51 percent raise in 2010 as the bank resumed paying cash bonuses following two years of pressure from regulators and lawmakers to curb compensation.”

And here’s more, from the Wall Street journal: “$57,031. That’s about what the average U.S. archaeologist made last year. It’s also what J.P. Morgan CEO Jamie Dimon made every day of last year — $20.8 million total, according to the firm’s proxy filing this week. Anyone who has doubts about the resiliency of Wall Street banks and brokerages should ponder that figure for awhile. The J.P. Morgan board also spent about $421,500 to sell Dimon’s Chicago home. And they brought back the big cash bonus, doling out $30.2 million in greenbacks to Dimon and his top six lieutenants.”

The CEOs of the venerable trading firms that were forced into bankruptcy were all paid bonuses. In a small recent case, executives of Borders intended to pay themselves $8 million in bonuses until a U. S. Trustee objected. A company spokesperson said, “The proposed programs were designed to retain key executives at Borders as we proceed through the Chapter 11 reorganization process.” In short, retain those whose management bankrupted the corporation.

Corporations in theory are managed to benefit their shareholders. The more money Wal-Mart can make by busting unions and allegedly discriminating in its hiring practices, the happier its shareholders become. Yet obscene bonuses penalize even the shareholders. Isn’t that, in theory, their money? Wouldn’t it be decent for the occasional corporation to put a cap on bonuses and distribute the funds as dividends?

I have no objection to financial success. I’ve had a lot of it myself. All of my income came from paychecks from jobs I held and books I published. I have the quaint idea that wealth should be obtained by legal and conventional means–by working, in other words–and not through the manipulation of financial scams. You’re familiar with the ways bad mortgages were urged upon people who couldn’t afford them, by banks who didn’t care that the loans were bad. The banks made the loans and turned a profit by selling them to investors while at the same time betting against them on their own account. While Wall Street was knowingly trading the worthless paper that led to the financial collapse of 2008, executives were being paid huge bonuses.

Wasn’t that fraud? Wasn’t it theft? The largest financial crime in American history took place and resulted in no criminal charges. Then the money industries and their lobbyists fought tooth and nail against financial regulation. The Republicans resisted it, but so did many Democrats. Partially because of the Supreme Court decision allowing secret campaign contributions, our political system is largely financed by vested interests.

We know that Bernie Madoff went to jail. Fine. No Wall Street or bank executive has been charged with anything. It will never happen. The financial industries are locked an unholy alliance with politicians and regulators, all choreographed by lobbyists. You know all that.

What puzzles me is why there isn’t more indignation. The Tea Party is the most indignant domestic political movement since Norman Thomas’s Socialist Party, but its wrath is turned in the wrong direction. It favors policies that are favorable to corporations and unfavorable to individuals. Its opposition to Obamacare is a textbook example. Insurance companies and the health care industry finance a “populist” movement that is manipulated to oppose its own interests. The billionaire Koch brothers payroll right wing front organizations that oppose labor unions and financial reform. The patriots wave their flags and don’t realize they’re being duped. Consider taxes. Do you know we could eliminate half the predicted shortfall in the national budget by simply failing to renew the Bush tax cuts? Do you know that if corporations were taxed at a fair rate, much of the rest could be found? General Electric recently reported it paid no current taxes. Why do you think that was? Why do middle and lower class Tea Party members not understand that they bear an unfair burden of taxes that should be more fairly distributed? Why do they support those who campaign against unions and a higher minimum wage? What do they think is in it for them?

If it is “socialist” to believe in a more equal distribution of income, what is the word for the system we now live under? A system under which the very rich have doubled their share of the nation’s income in 25 years? I believe in a fair day’s work for a fair day’s pay. Isn’t that an American credo? How did it get twisted around into an obscene wage for shameless plunder?

One of the challenges facing the One-Percenters these days is finding ways to spend their money. Private residences grow as large as hotels, and are fitted out with the amenities of luxury resorts. Fleets of cars and private airplanes are at their owners’ disposal. At work, they sink absurd mountains of money into show-off corporate headquarters that have less to do with work than with a pissing contest among rival executives. Private toilets grow as large as small condos, outfitted with Italian marbles and rare antiques. This is all paid for by the shareholders. One area of equality between the One-Percenters and the rest of us is that we sit on toilets of about the same size. What’s different is the size of our throne rooms.

I find this extravagance unseemly in a democracy. Many of today’s One-Percenters feel no more constraint than Louis XIV. A culture of celebrity has grown up around these conspicuous consumers, celebrating their excesses. I believe rewards are appropriate for those who have been successful. I also believe a certain modesty and humility are virtuous. I find it unbecoming that those who fight most against social welfare are those most devoted to their own welfare.

In America there is an ingrained populist suspicion of fats cats and robber barons. This feeling rises up from time to time. Theodore Roosevelt, who was elected as a Trust Buster, would be appalled by the excesses of our current economy. Many of the rich have a conscience. Andrew Carnegie built libraries all over America. The Rockefeller and Ford Foundations do great good. Bill Gates lists his occupation as “philanthropist.”

Yet the most visible plutocrat in America is Donald Trump, a man who has made a fetish of his power. What kind of sick mind conceives of a television show built on suspense about which “contestant” he will “fire” next? What sort of masochism builds his viewership? Sadly, I suspect it is based on viewers who identify with Trump, and envy his power over his victims. Don’t viewers understand they are the ones being fired in today’s America?