The Trump administration seems to be blowing hot and cold when it comes to the future of the Arctic, uncertain whether the rapidly melting sea ice is an opportunity or a threat — or if global warming is even behind it.

Mike Pompeo, the U.S. secretary of state, delivered a bunch of mixed messages at a meeting of the eight-nation Arctic Council that wrapped up in Northern Finland this morning.

His 20-minute speech outlining American policy on the Far North touted the region’s “opportunity and abundance” for all, going on to make the somewhat confusing claim that the Arctic houses 13 per cent of the world’s “undiscovered” oil, and 30 per cent of its yet-to-be found natural gas.

And Pompeo predicted that new lanes across the formerly frozen seas will “become the 21st century Suez and Panama Canals,” cutting as many as 20 days off of shipping times between Asia and the West.

But at the same time, he painted a picture of Russian aggression and Chinese opportunism in the Arctic. He then threw Canada under the tundra bus for good measure, lumping Ottawa in with Beijing and Moscow while discussing “illegitimate claims” of national sovereignty in the region.

Trump’s own attempts to overturn Obama-era restrictions on oil and gas drilling in the Arctic have been stalled by the courts. And now it seems the White House has begun to worry about what others might have planned for the region.

Vladimir Putin has made the development of Russia’s Arctic one of his goals, announcing plans for a major railway expansion and aiming to increase Northern Sea route shipping by 73 million tonnes a year by 2024. Close to 120 “priority” infrastructure and industrial projects have already been identified, and Moscow will soon announce a series of major tax breaks for both domestic and foreign investors.

And last month, Putin travelled to Beijing to try and tap into China’s global Belt and Road initiative, proposing that the Arctic sea lane become part of the planned “Maritime Silk Road.” 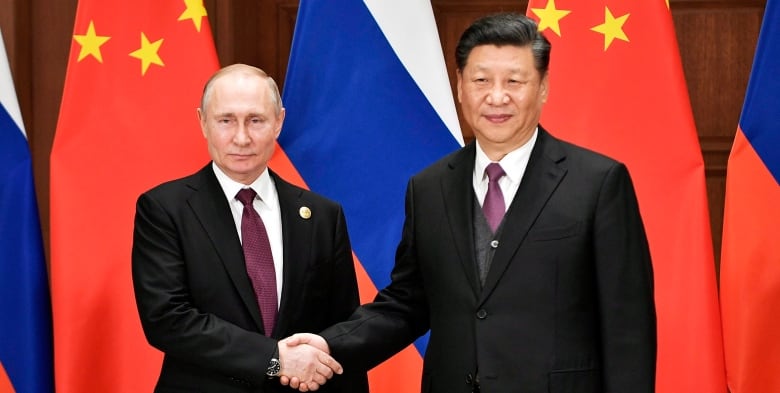 The prospect of the other two superpowers teaming up in the Far North has clearly spooked Washington.

There was already longstanding unease over Russia’s military build-up in the region that has seen the construction of 14 new airfields, 16 deepwater ports, and the addition of four Arctic combat teams and more than 40 icebreakers in recent years. 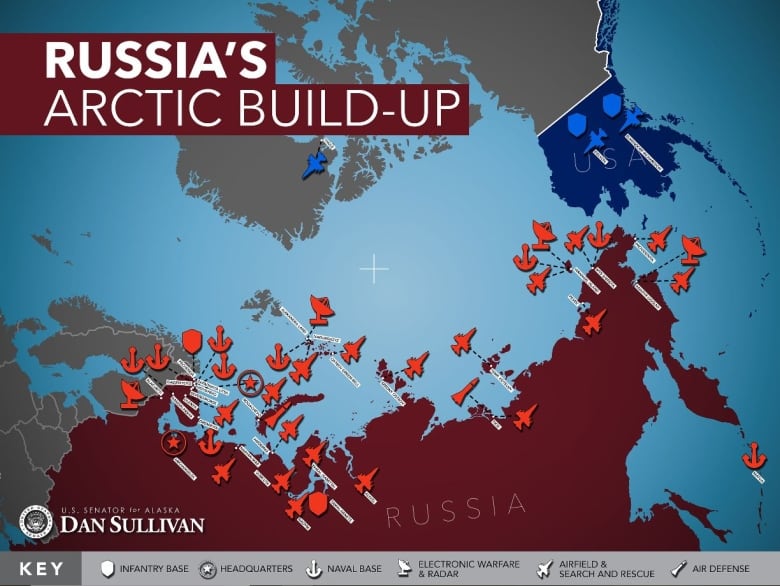 While Russian jamming of GPS satellites during a major NATO exercise in Norway last fall raised concerns that the Kremlin has already achieved a level of strategic control in the region.

Last week, a Pentagon report warned that China might use its own growing fleet of icebreakers and polar research stations as a pretext for Arctic military adventures, potentially deploying nuclear-armed submarines.

At a military forum in Washington yesterday, U.S. Air Force Gen. Terrence O’Shaughnessy, who heads up NORAD, warned that the security of the Far North can no longer be taken for granted. “The Arctic is the first line of defence,” he told reporters.

O’Shaughnessy recently delivered that message of a “systematic and methodical increase in threats” to both U.S. and Canadian policy makers. Although there doesn’t seem to be much urgency about it in Ottawa, with Liberal MP John McKay, the Canadian co-chair of the Permanent Joint Board on Defence, telling CBC radio last month that the country is “not very well prepared,” to deal with the military build-up.

A nuclear-powered Type 094A Jin-class ballistic missile submarine of the Chinese People’s Liberation Army (PLA) Navy is seen in the foreground during a military display in the South China Sea in April 2018. The U.S. says it’s worried about the potential of nuclear-armed Chinese submarines being deployed in the Arctic. (Reuters)

“It’s not just simply the presence of significant numbers of troops, but it’s also missiles, and ships, and ballistic missiles, and low-altitude cruise missiles,” he said.

Canada ranks 14th in the world in military spending, according to a newly published report, at $21.6 billion US a year. It clearly isn’t in the same league as the table-topping Americans ($649 billion), second-place Chinese ($250 billion) or even the Russians, who officially spent $61.4 billion on defence, but probably deserve to rank higher than sixth.

But at least Ottawa is willing to openly talk about the “terrifying” underlying reason for the new strategic and economic competition in the Arctic — global warming.

This morning, the Arctic Council ended without an official joint declaration because Mike Pompeo refused to sign off on any document that contained the words “climate change.” 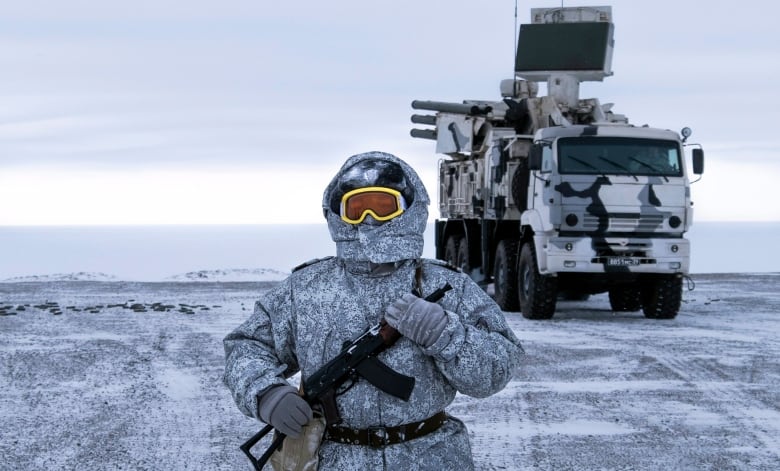 A Russian soldier guards a Pansyr-S1 air defence system on Kotelny Island on April 3. Russia has made reaffirming its military presence in the Arctic a top priority amid an intensifying international rivalry over the region that is believed to hold up to a quarter of the planet’s undiscovered oil and gas. (Vladimir Isachenkov/Associated Press)

In that, the U.S. secretary of state seems to be out of sync with America’s military, which now categorizes the changing weather and mounting temperatures as a threat to national security.

“We’re a hundred years behind understanding the conditions of where we’ll have to defend the homeland and our partners,” Okon told the same Washington forum, lamenting the lack of Arctic weather stations and sensors. “We’re operating in the blind.”

Plant-based protein. It doesn’t exactly sound delicious, does it? Even so, “hamburger” patties, deli slices and sausage made with protein from peas, soy or quinoa are part of one of the hottest food trends at the moment. As business correspondent Dianne Buckner writes, meat-free is going mainstream.

Once upon a time, only vegetarians, vegans and health food aficionados would be eager to nosh on meatless meals. Now food manufacturers, grocery stores and investors see huge potential in this growing consumer trend.

When California-based company Beyond Meat listed its shares on the stock market late last week, the share price shot up 163 per cent on the first day of trading. 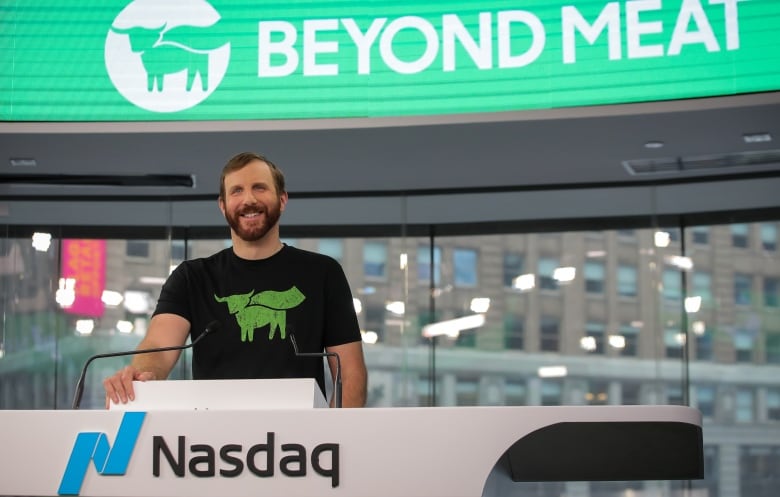 Ethan Brown, founder and CEO of Beyond Meat, prepares to ring the opening bell to celebrate his company’s IPO at the Nasdaq Market site in New York on May 2. (Brendan McDermid/Reuters)

Beyond Meat patties were introduced in an A&W burger last summer. When they sold out almost immediately, it helped ignite the phenomenon.

That product is now going to be available for sale at grocery stores as well, for home grilling. And other brands and other products are coming fast. 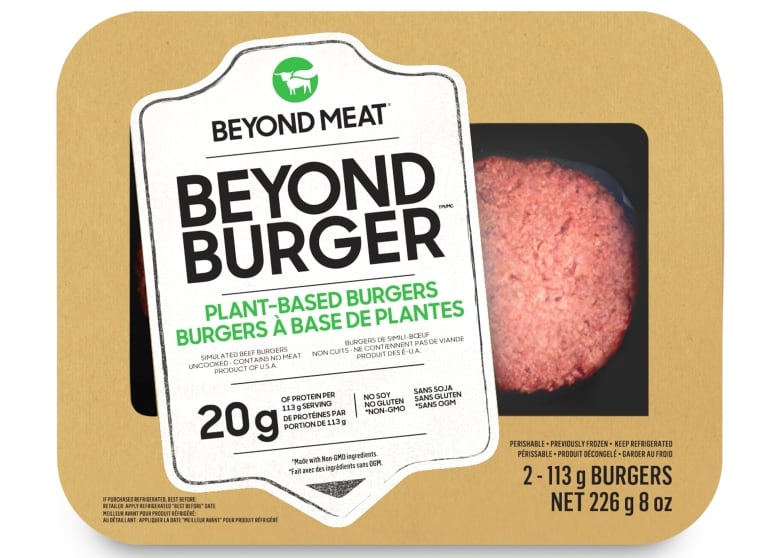 Even Canadian meat giant Maple Leaf Foods is jumping on the bandwagon, investing a whopping $600 million in plant-based protein. I interviewed CEO Michael McCain for this story, and he says he now views Maple Leaf as a “protein company,” not as a meat company.

But is plant-based protein just a fad? And how will it fit into the diet of the average Canadian? Tune in tonight for more on how meat-free is going mainstream.

“There’s so much we could be doing, it’s just a matter of [having] the political courage to do that, and I think people saw that in me. Whether it’s people dealing with floods in the east or forest fires in the west, people are seeing the threat now. Our forests are dying around us and it’s time to take bold action.”

– Paul Manly, newly elected Green Party MP for the Vancouver Island riding of Nanaimo-Ladysmith, on how concern over climate change fueled his win. 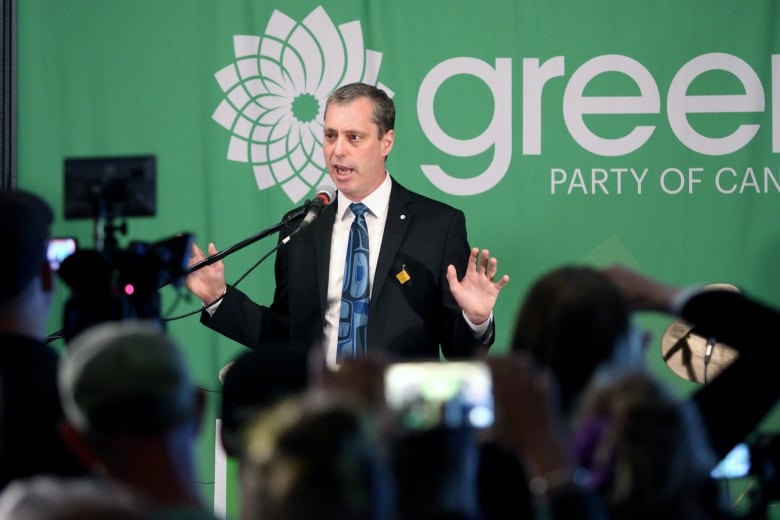 The Green Party’s Paul Manly delivers a speech after results come in for the Nanaimo-Ladysmith byelection at the Cavallotti Lodge in Nanaimo, B.C., on Monday night. (Chad Hipolito/The Canadian Press)

Terry Fox’s Marathon of Hope almost ended in Cape Breton. Just off the ferry and still feeling seasick, he agreed to take a brief run along the Trans-Canada Highway so that a local CBC crew could get some footage. “They were only going about five miles an hour when I heard this huge freight truck come barrelling up and not slowing down. Smack. At 50 miles per hour it hit the CBC vehicle, forcing it off the road, over a ditch and into the woods,” Fox wrote in his diary. The cameraman ended up with a cut face and the soundman, who had been riding in the rear of the Chevy Suburban, was thrown clear and suffered a compression fracture in his back. Fox survived unscathed because he was running alongside the SUV, rather than out front. But the aftermath and investigation limited him to just 5 km on his first running day on the mainland.