The Nigerian army says it has rescued 54 women and children held captive by the extremist group Boko Haram.

A statement issued Monday by military spokesperson Sagir Musa says troops rescued the captives during a clearance operation over the weekend in Borno State.

The military spokesperson said the rescued persons consist of 29 women and 25 children.

Names of missing Chibok schoolgirls kidnapped by Boko Haram five years ago are displayed during the 5th year anniversary of their abduction, in Abuja. (Afolabi Sotunde/Reuters)

Boko Haram frequently abducts women and children. The jihadist group began its insurgency in northeastern Nigeria and now has expanded its reach to the neighbouring countries of Chad, Cameroon and Niger.

In April 2014, 276 girls were abducted from the Government Secondary School in Chibok. Many have been freed, but more than 100 of them are still missing five years later.

More than 100 schoolgirls were kidnapped in February 2018 after Boko Haram attacked a village in the northeastern state of Yobe. 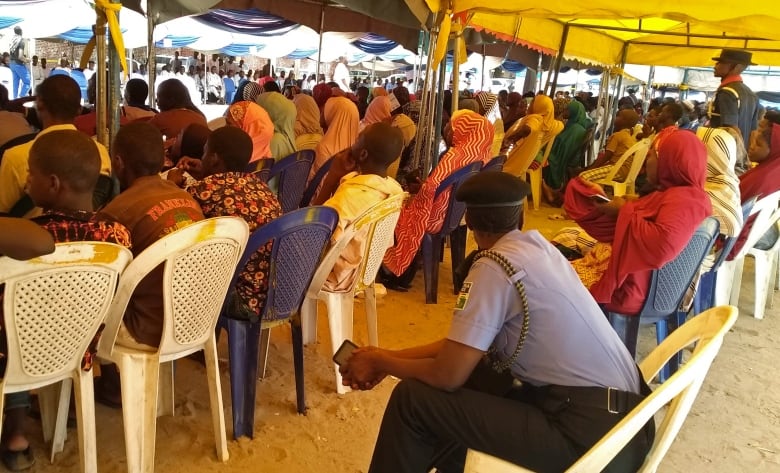 Children and young men who were freed from the ranks of a militia group fighting against Islamist Boko Haram insurgents are pictured during a handover ceremony in the city of Maiduguri, Nigeria, May 10. (Kolawole Adewale/Reuters)

Non-state armed groups embroiled in the decade-long conflict against Boko Haram recruited more than 3,500 children between 2013 and 2017 in Nigeria’s northeast, according to UNICEF.

“[This] is a step in the right direction for the protection of children’s rights and must be recognized and encouraged,” UNICEF Nigeria chief Mohamed Fall said in the statement, referring to Friday’s release by the militia group, which works closely with the military to fight Boko Haram.