Israel on Wednesday commemorated its Holocaust Remembrance Day in honour of the six million Jews killed by the Nazis, as leaders voiced concerns about a rising wave of anti-Semitism around the world.

The 24-hour remembrance period began at sundown with the main ceremony at Jerusalem’s Yad Vashem Holocaust memorial, and came just hours after Israeli researchers reported that violent attacks against Jews rose significantly last year. This spike, highlighted by the San Diego attack, was most dramatic in western Europe.

President Reuven Rivlin warned of anti-Semitism in Europe, which he said “is once again raising its head, fuelled by waves of immigration, by economic crises, and by disillusionment with the political establishment.”

In veiled criticism of Netanyahu, he urged the government to be cautious about forging alliances with the far-right parties in Europe.

“Every country and society has the legitimate right and even the duty to choose its policy and to protect its identity. Not every right-wing party in Europe that believes in controlling immigration or in protecting its unique character is anti-Semitic or xenophobic,” Rivlin said.

“But political forces where anti-Semitism and racism are part of their language, their legacy or their ideology can never be our allies.”

He added: “No interest and no consideration of realpolitik can justify a dishonourable alliance with racist groups or elements who do not acknowledge their past and their responsibility for the crimes of the Holocaust.”

Rivlin did not identify any particular countries. But Netanyahu has come under criticism for embracing a string of eastern European leaders who have offered strong political support to Israel while promoting a distorted image of the Holocaust.

A slew of former communist nations whose leaders recently visited Israel and paid their respects at Yad Vashem, such as Hungary, Lithuania and Poland, are swept up in a wave of Second World War-era revisionism that seeks to diminish their culpability in the Holocaust while making heroes out of anti-Soviet nationalists involved in the mass killing of Jews.

In Israel, established in the wake of the Nazi genocide of six million Jews, many say Netanyahu is cynically betraying the victims’ memory. 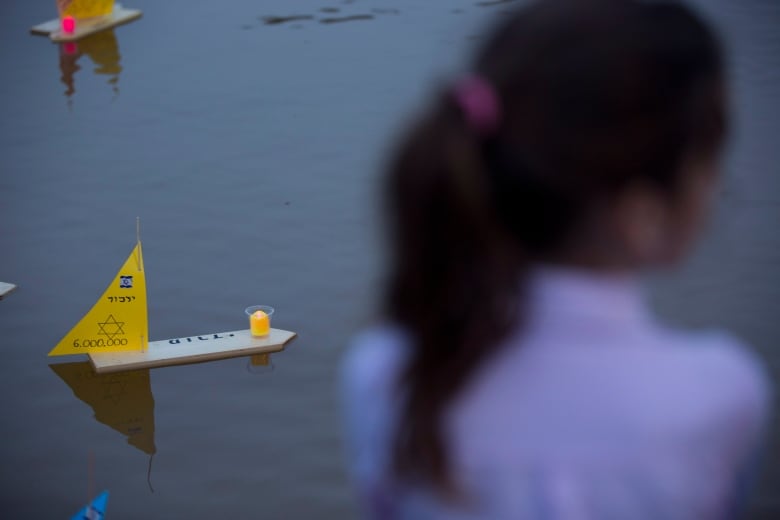 Handmade boats with the names of Nazi concentration camps float in a lake during a ceremony marking the annual Holocaust Remembrance Day in Tel Aviv, Israel, on Wednesday. (Oded Balilty/Associated Press)

Netanyahu, meanwhile, warned of rising anti-Semitic extremism as well. He said that the extreme right, extreme left and radical Islam agree on “one thing: their hatred of Jews.”

He noted the synagogue shootings in San Diego last weekend and in Pittsburgh last October as well as vandalism at Jewish cemeteries. He also took aim at a recent political cartoon in the New York Times’ international edition, saying that even “respected newspapers” have gotten swept up in the trend.

“We’re not talking about legitimate criticism of Israel,” he said, “but of systematic, poisonous and shallow hatred.”

Holocaust Remembrance Day is one of the most melancholy days on Israel’s calendar. Places of entertainment and cafés are closed. TV and radio stations broadcast Holocaust documentaries and interviews with survivors or somber music until sundown the next day.

Israelis come to a mournful, two-minute standstill to remember the dead Thursday morning when sirens wail across the country. Pedestrians stop in their tracks. Cars pull over on roads and many people exit their vehicles to stand still in contemplation.

The names of Holocaust victims are read out in parliament.