Transport Minister Marc Garneau told the Senate committee studying the Liberal government’s B.C. oil tanker ban bill today that he is open to amendments to Bill C-48 as long as they preserve the bill’s stated purpose: to stop virtually all crude oil shipments from ports along B.C.’s northern coast.

Faced with criticism from industry, First Nations and provincial leaders, Garneau did not rule out accepting amendments from committee members — including a proposal that would demand a mandatory review of the ban every 3, 5 and 10 years and a proposed change that would tie the bill’s enactment to completing the Trans Mountain expansion project. As written, the legislation bans the vast majority of crude oil shipments from the region indefinitely.

“We will receive any amendment that is proposed by the Senate and look at it very, very carefully,” Garneau said.

“However, let’s not lose sight of an opportunity we have here to lock in an unprecedented level of protection for one of the world’s most unique and biodiverse ecosystems, and to protect one of Canada’s most pristine and wild places. I think that is something we can all take pride in.”

Garneau said the government will not accept Senate amendments that would carve out corridors through the waters in question for oil transportation. He said that would be like allowing one table to smoke in a non-smoking section of a restaurant, since a spill on water can’t be confined to one area.

The bill would ban tankers capable of carrying more than 12,500 metric tons of oil from an area that stretches from the northern tip of Vancouver Island to the Alaska border — doing away with projects like Enbridge’s now-defunct Northern Gateway or the Indigenous-led Eagle Spirit proposal for good.

The legislation formalizes a similar, voluntary ban that has been in place in the region for the past 30 years.

Tanker ban supporters say they worry that a crude spill in coastal waters could threaten the viability of a diverse fishing industry that sustains well over 1,000 livelihoods in the area through fishing and processing.

Opponents fear the ban, combined with limited pipeline capacity and cratering oil prices, could spell the end of one of the country’s largest export industries.

A tanker is anchored in Burrard Inlet just outside of Burnaby, B.C., on Friday, Nov. 25, 2016. (Jonathan Hayward/THE CANADIAN PRESS)

Garneau faced criticism from Conservative and Independent senators alike Tuesday, who said the government’s justification for the bill — protecting a pristine ecosystem in a remote part of the country — is unevenly applied, since crude-laden tankers cross Newfoundland’s Placentia Bay on an almost daily basis.

Conservative Newfoundland Sen. David Wells said an outright ban is too blunt a legislative instrument, arguing that a robust risk management system has allowed Newfoundland to protect the marine environment while allowing commerce.

While touting Indigenous support for the legislation, Garneau acknowledged that the government is now bracing for legal action by the Nisga’a Nation — a party to one of the most comprehensive modern treaties in Canadian history — because the First Nation has argued this sort of federal action infringes on its negotiated right to control its territory and the surrounding waters.

“We urged the minister, his cabinet colleagues and staff that the moratorium must not be introduced before the implications on our nation and our treaty were well understood,” said Eva Clayton, the president of the Nisga’a Lisims Government.

“Despite these efforts, our appeals fell on deaf ears and the legislation was introduced without any further dialogue with the Nisga’a Nation. Clearly, consultation on this legislation fell well short of what would be expected between treaty partners.”

Clayton said the ban robs her community of about 3,000 in northern B.C. of future economic opportunities in an area with few alternatives.

“We aspire to become a prosperous and self-sustaining nation that can provide meaningful economic opportunities for our people,” Clayton said. “Our future prosperity and the ability of our people to enjoy a better quality of life requires the creation of an economic base. 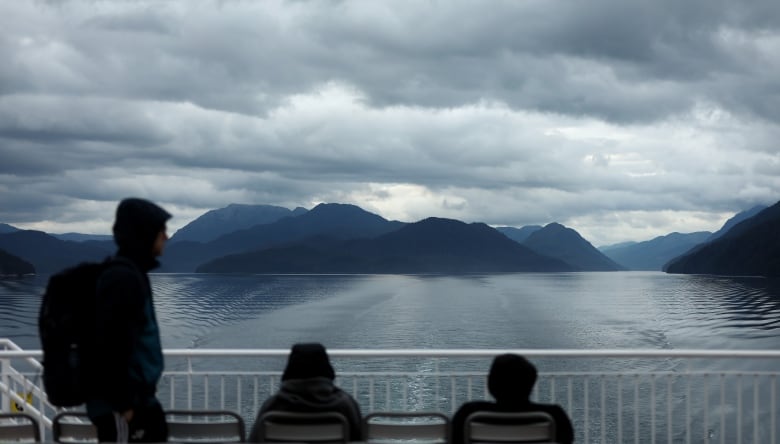 A view of the Inside Passage from aboard the B.C. Ferries “Northern Expedition” between Port Hardy on Vancouver Island and Prince Rupert, B.C. The federal Liberal government is pushing for an oil tanker ban in the waters off the northern B.C. coast. (Colin Perkel/Canadian Press)

“This legislation is not based on scientific evidence, does nothing to protect sensitive ecosystems on the West Coast and represents an arbitrary choice of one coastline over others.”

Garneau said the federal government is taking action in an area clearly covered by a treaty because it believes it’s in the best interest of all Canadians. His office has denied claims that Transport Canada did not pursue adequate consultation with coastal First Nations.

Senators also noted that cruise ships and tankers carrying other products through these waters — vessels that carry a great deal of fuel and are also vulnerable to spills — won’t be subjected to the restrictions C-48 imposes on ocean-going vessels carrying Alberta crude.

The federal Liberals are pushing for passage of C-48 just as Alberta is grappling with a series of problems plaguing its energy industry: a decline in investment, historically low commodity prices and constrained pipeline capacity.

“How does it get out of town? You’re the minister of transport. You have a responsibility to make sure our product gets out of the country so we can sell it to to a market that wants our oil,” Tkachuk said. “How are we going to solve this problem?”