An Edmonton woman is calling for a dog owner to take responsibility after she says a dog burst through her backyard fence and attacked her pet.

Vicki Romanick was sitting in her living room on Saturday evening when she saw a large black dog charge at her chain-link fence.

“When I looked out my window, the dog smashed through the gate completely,” she said. “I would describe it as seeing a horse smash through a gate … with that amount of force.”

The dog barreled into the fence with enough momentum to bend the gate’s latch and burst into the yard, she said.

“He bent the metal like it was absolutely nothing,” Romanick told CBC News. “That gate flew open like it didn’t even have a latch on it.”

Romanick said the dog bent the gate’s latch when it charged into the fence. (Scott Neufeld/CBC)

Once through the gate, Romanick said the dog went after her 27-pound pug-papillon mix, Hemi. It got ahold of Hemi’s left side, leaving several deeps wounds in his flesh.

Romanick ran into the backyard and yelled at the black dog, which was being chased by another woman.

“I screamed that I was going to kill their dog. Maybe that wasn’t the politically appropriate thing to do, but I knew that I needed to get into my growl and get that dog’s attention because it was on my dog,” she said.

The black dog jumped back when it heard her, she said, giving the woman a chance to grab it.

Romanick said the woman and another man left after a verbal altercation with her husband.

Edmonton Police Service investigated after threats were reportedly uttered. The incident did not meet the threshold for laying criminal charges and the investigation has since ended, said police spokesperson Cheryl Voordenhout.

Romanick also reported the incident to Edmonton Animal Care and Control. Under local bylaw, dog owners are required to have their dog on a leash and are liable if their dog attacks another animal.

‘An expectation of reasonable safety’

Hemi spent a night at the vet, where his wounds were stitched and fixed with drainage tubes. He’s been recovering at home since Sunday, but Romanick is concerned the incident will make her otherwise timid dog aggressive. 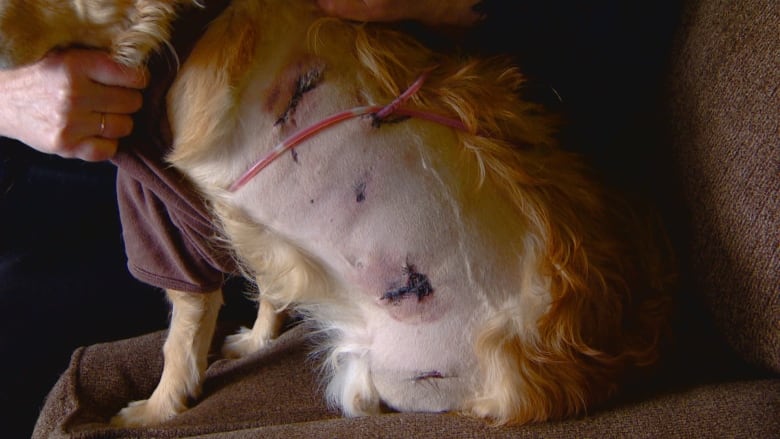 Vicki Romanick’s dog, Hemi, was attacked by a much larger dog that burst through the locked gate of the chain-link fence bordering her backyard. (Scott Neufeld/CBC)

Romanick’s home is near 28th Street and 34th Avenue, and backs onto green space that leads to the Larkspur off-leash dog park. She said about 25 dogs pass by every day, many off-leash, even though the corridor isn’t an off-leash area.

“Everyone along here is in danger,” she said. “With the amount of dogs that are running at large with nobody controlling them.”

The safety of her three grandchildren, who often play in the backyard during visits, is jeopardized if people keep their dogs off-leash in the corridor, Romanick said. She would also like to see more enforcement in the area by the city’s animal control officers.

“All I’m looking for is like anybody else, an expectation of reasonable safety in my backyard. Is that so hard to ask?” she said.

“This could’ve been kids. This dog was vicious.”