Hong Kong’s legislative assembly descended into chaos Saturday as legislators for and against controversial amendments to the territory’s extradition law clashed over access to the chamber.

At least one legislators was taken from the chamber on a gurney after apparently fainting during the morning melee, in which legislators pushed and shoved each other on the floor, amid seats and tables and in an adjoining hallway.

The amendments have been widely criticized as eroding the semi-autonomous Chinese territory’s judicial independence by making it easier to send criminal suspects to mainland China, where they could face vague national security charges and unfair trials.

Under the “one country, two systems” framework, Hong Kong was guaranteed the right to retain its own social, legal and political systems for 50 years following its handover from British to Chinese rule in 1997. However, China’s ruling Communist Party has been seen as increasingly reneging on that agreement by forcing through unpopular legal changes.

Legislators in the pro-Beijing camp attempted to seat Abraham Razack, also known as Abraham Shek, who had been named earlier in the week through another committee and a contested interpretation of council rules to replace pro-democrat James To Kun-sun as head of the Bills Committee. To had stalled passage of the legislation over two sessions and Razack was seen as the best chance to push it through before the July recess.

Pro-democracy legislator Gary Fan lies down after clashes with pro-Beijing legislators during a meeting for control of a meeting room to consider the controversial extradition bill in Hong Kong. (James Pomfret/Reuters)

However, pro-democracy legislators continued to claim James To is the legitimate chief of the committee guiding discussion of the proposed new law. Both they and their opponents had scheduled rival meetings on the same topic in the same Legislative Council meeting room on Saturday, starting just 30 minutes apart.

The two rival committees both claimed to be in charge of the same process of scrutinizing the new law before deciding on whether to vote on it.

At one point, Wu Chi-wai, the Democratic Party chairman who tried to stop Shek from presiding over the meeting, shouted at him, saying “Don’t be a sinner for a thousand years! Don’t sell out Hong Kong.” 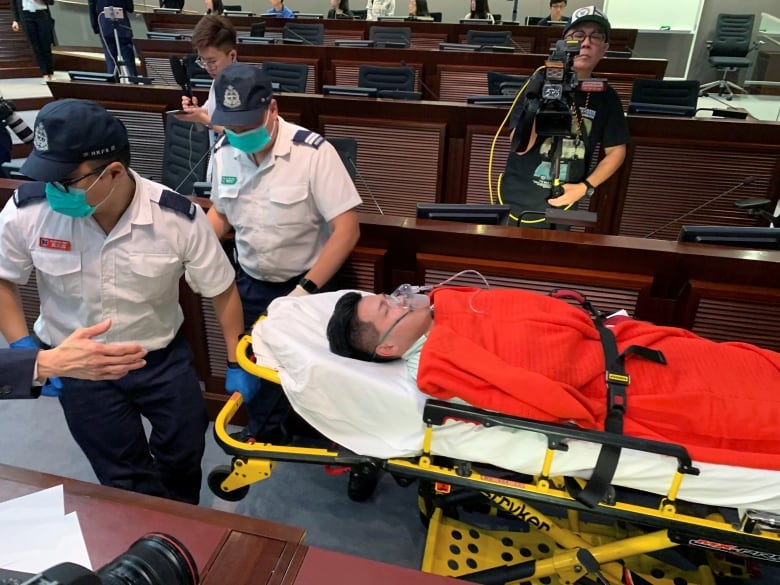 Gary Fan is carried from the chamber on a stretcher. (James Pomfret/Reuters)

The legislator removed by paramedics was identified as Gary Fan Kwok-wai of Neo Democrats.

The amendments expand the scope for the transfer of criminal suspects to China and remove the legislature’s right to scrutinize individual extradition decisions filed by Hong Kong’s chief executive.

They could also open the way for further measures to erode Hong Kong’s civil liberties, including the passage of anti-subversion legislation that has been strongly opposed by many.

Saturday’s legislative scuffle came weeks after a Hong Kong court handed down prison sentences of up to 16 months to eight leaders of massive 2014 pro-democracy protests on public nuisance charges. The harsh sentences were seen as an effort by the Hong Kong government to draw a line under the protests amid pressure from Beijing.

Tens of thousands of people marched against the extradition law amendments in Hong Kong last month and numerous legal, professional and human rights organizations have voiced their opposition. They warn the amendments would undermine not just Hong Kong’s legal independence but also its attractiveness as a center for international business.

“Some citizens and overseas organizations might have misunderstandings about the proposed law amendments,” Cheung said.

Hong Kong Chief Executive Carrie Lam has said the amendments must be passed to close a “loophole” under which the government has been unable to extradite a Hong Kong man, Chan Tong-kai, accused of killing his girlfriend in Taiwan last year. Lam was chosen in 2017 from among a slate of candidates approved by Beijing and elected by a 1,200-member pro-China electoral body.

However, self-governing Taiwan has firmly ruled out signing any extradition agreement with Hong Kong unless it is treated as an equal, a condition Beijing, which claims the island as its own territory, is certain to reject. That would appear to undermine one of the government’s major justifications for the amendments.

Taiwanese officials have also warned that Taiwanese detained in Hong Kong could be sent to China for their political activities if the amendments are passed. A Taiwanese activist, Lee Ming-che, is currently serving a five-year sentence in China after being convicted by a Chinese court in November 2017 on charges of subverting state power for holding online political lectures and helping the families of jailed Chinese dissidents.

Lee disappeared into the custody of the security services in March 2017 after crossing into China from Macau to meet with a friend. His arrest was seen as a sign the ruling party intends to extend its intolerance of criticism even outside its borders.

The Hong Kong government will continue to liaise with Taiwan over the homicide case, Cheung said.