Two young brothers, both with a deadly genetic disease, could face two very different futures because only one has access to cutting-edge medication.

Andre Larocque, 8, and his younger brother, Joshua, 6, have cystic fibrosis.

The relatively rare disease leads to the destruction of the lungs and an early death for most people who have it.

There is no cure. Once lung function is lost, there is no way to get it back.

“When I put them to bed at night, I hear Andre go to sleep peacefully and then I hear Josh laying awake in his bed coughing himself to sleep,” mother Sasha Haughian said during an interview from the family’s home in the small Ontario town of New Tecumseth.

“I don’t know how to describe the feeling of listening to that and knowing it’s just gonna get worse.”

Andre is on a medication called Symdeko through a drug trial, but Joshua wasn’t selected for the trial and has no access to two similar Health Canada-approved medications. That’s because the Ontario government doesn’t fund the drugs for the vast majority of cystic fibrosis patients and his parents can’t afford to pay out of pocket.

Sasha Haughian, left, and Jamie Larocque’s private insurance does not cover the medications that could help treat the underlying cause of their sons’ cystic fibrosis. They want the Ontario government to fund these drugs. (CBC)

“It’s a progressive, fatal disease … we have medication right now that more than half the population [with cystic fibrosis] could benefit from, and we’re not getting access to it,” Haughian said.

About 4,200 Canadians have cystic fibrosis. There are three gene-modifying drugs available — Symdeko, Kalydeco and Orkambi — that are believed to slow down lung damage caused by the disease. Other treatments only ease symptoms.

Unlike many other countries, Canada does not have a special process for evaluating drugs for rare diseases. Clinical trials for such drugs are limited by their small pool of potential participants. This makes proving a drug’s effectiveness more difficult — which makes convincing provincial governments and private insurers to cover the cost for patients more unlikely, health advocates say.

“It’s a heartbreaking situation … These are symptoms of a larger issue, which is essentially our system was not built to evaluate and fairly assess drugs for rare diseases,” said Kim Steele, director of government and community relations for Cystic Fibrosis Canada.

Haughian and her husband, Jamie Larocque, say Symdeko has been a life-changer for Andre since he started taking it in January 2018. While he can run around and play hockey with his friends, his younger brother’s condition is deteriorating.

“When we first found out Andre was accepted for the trial, we were so excited,” Larocque said.

“And then after a couple days, I realized, ‘Oh wait, Josh has nothing.’ Now that it’s been over a year, we’re really starting to see Andre just shoot ahead and Josh falling behind, and that’s tough.” 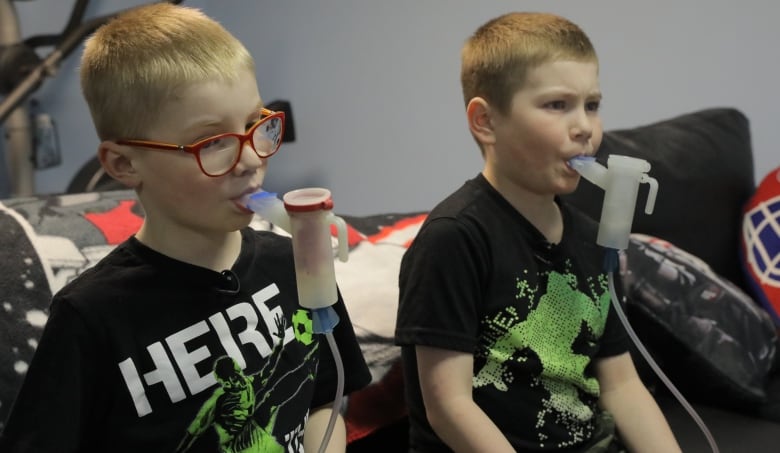 A few times a day, Joshua and Andre use medical devices called nebulizers that turn liquid medicines into mist so they can inhale them straight into their lungs. These medications do not fight the underlying cause of cystic fibrosis. (CBC)

The family and their doctor believe Orkambi would change that. But the family can’t afford the annual cost of $250,000. Their private health-care plan won’t pay for it either.

They are desperate for Ontario to cover the medication for their younger son. They say the criteria for who qualifies for coverage are too strict.

The medication is only funded for children between the ages of six and 17 who are really sick for a long time — it’s called the “exceptional cases” criteria. To qualify, a patient must show that they lost 20 per cent of their lung function for a six-week period over the course of six months.

That’s the standard in three provinces — Alberta, Saskatchewan and Ontario. The other provinces and territories don’t cover the drug at all and no province funds the drug for adults.

Under the rules, less than two per cent of children with cystic fibrosis qualify for Orkambi coverage in Ontario, according to Cystic Fibrosis Canada.

And Joshua isn’t one of them.

The Ontario Health Ministry says it has not received any requests for coverage since the introduction of the exceptional cases criteria on Feb. 20. 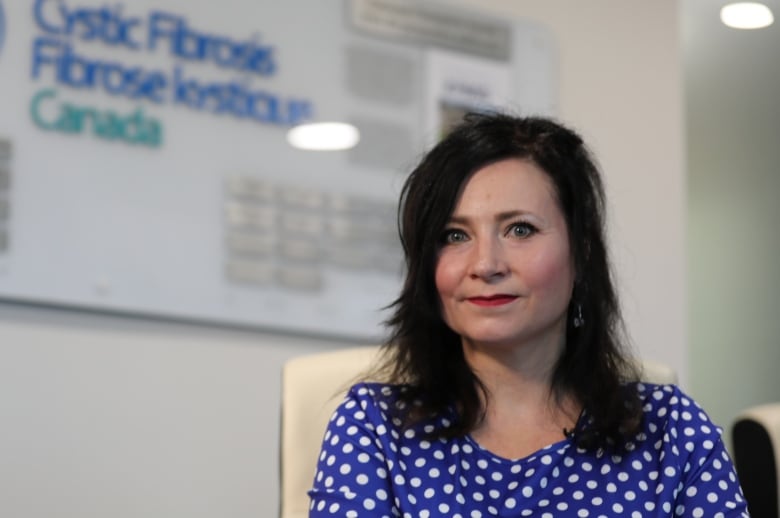 The board that recommends whether medications should be publicly funded is the Canadian Agency for Drugs and Technologies in Health (CADTH). It’s made up of representatives from the health-care system, academia and the public.

Steele says a lot of good medications are rejected for coverage because the testing criteria are designed for drugs that treat more common diseases and can be evaluated in large clinical trials.

‘Hard to put a price on life’

Then there is the cost.

“It’s expensive,” Steele said. “I’m not going to shy away from saying price is definitely a concern. However, it’s very hard to put a price on life.”

The three cystic fibrosis drugs are priced at about $250,000 a year in Canada. But Chris MacLeod, chair of the Canadian Cystic Fibrosis Treatment Society, which advocates that patients with the disease should have access to any medication their doctor prescribes, says that doesn’t reflect what the real cost would be if Canada did a better job negotiating with drug companies. He points to other countries where the drugs are available for less than half that price.

The problem, he says, is Canada does not negotiate prices with drug companies until the end of the CADTH review, so many drugs end up being rejected for coverage because of cost.

In some cases, provinces won’t negotiate at all, or they go it alone instead of negotiating on a national scale and buying in bulk to lower the cost.

“Canada is an outlier. We’re the only developed country that either doesn’t have a deal, or isn’t negotiating a deal,” MacLeod said of Orkambi.

“Quite frankly, I think it’s bureaucrats that have become so baked in the system that they’ve lost perspective.” 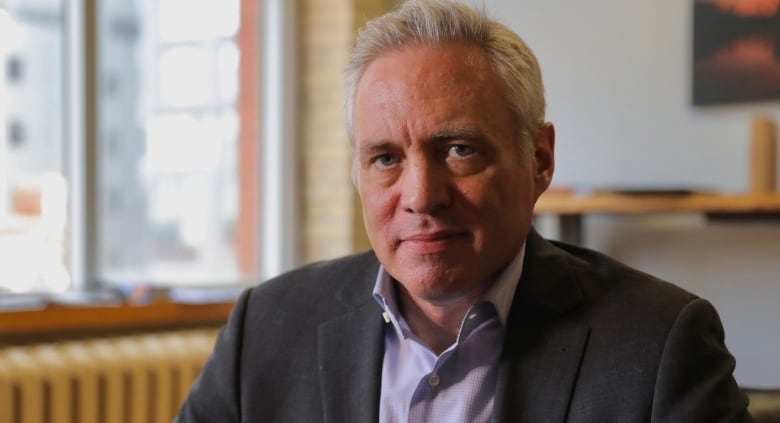 Chris MacLeod is a lawyer and founder of the Canadian Cystic Fibrosis Treatment Society. He says governments are violating the charter rights of cystic fibrosis patients by denying them access to a drug they need. (Jonathan Castell/CBC)

Meanwhile, Canadians like Joshua Larocque go without the medications they need, he said.

MacLeod is also a lawyer and is heading up a class action lawsuit against the B.C. government, federal government, CADTH and others over the lack of funding for Orkambi. The suit claims governments are “denying access to lifesaving drugs in a very non-transparent, non-evidence-based manner.”

None of the allegations has been proven in court.

In an email to Go Public, B.C.’s Ministry of Health said CADTH recommended Orkambi not be funded due to a lack of evidence on two separate occasions.

“These recommendations are based on clinical and cost factors,” a spokesperson said. “And with Vertex setting the cost of Orkambi at $250,000 a year per patient, its cost is unsustainable for public and private drug plans.”

In an email to Go Public, a CADTH spokesperson said that over the past five years, the agency has taken steps to clarify and enhance processes to address the unique challenges of evaluating drugs for rare diseases.

In October, the family asked for a meeting with Elliott. They said they were told by her office it would happen. They’re still waiting to hear when, and their followup messages have gone unanswered.

As opposition health critic, Elliott criticized the government at the time for not funding Kalydeco, one of the three gene-modifying cystic fibrosis medications. The drug was later added to the coverage list in Ontario, but few patients qualify.

It’s a similar story with Orkambi. In February, Ontario agreed to fund the drug on a case-by-case basis under what’s called the Exceptional Access Program. So far, not one cystic fibrosis patient has qualified for provincial coverage under the program’s criteria, said MacLeod.

Watch: Elliott challenged the Liberal government to cover Kalydeco several years ago when she was Opposition health critic.

The minister turned down a request for an interview with Go Public and didn’t respond to specific questions we sent about Joshua and Andre’s situation and about access to the cystic fibrosis medications, providing instead a general statement from a spokesperson.

Joshua and Andre’s parents are still hopeful the federal government will deliver on a 2019 federal budget promise to implement a rare disease strategy that could help people like Joshua.

The family believes Andre will continue to get access to Symdeko indefinitely. The trial is to test the medication on younger children and track it as they grow. It’s already approved by Health Canada for children ages 12 and older.

Vertex Pharmaceuticals makes both Orkambi and Symdeko. It tells Go Public it has no plans to ask CADTH to review Symdeko for provincial funding, saying the present system for assessing drug coverage in Canada “has challenges.”

When asked why the cost of Orkambi is so high, Vertex didn’t answer, but Cystic Fibrosis Canada says developing medications for rare disease is expensive because the market for them is so small. Haughian, right, a mother of three young kids, fears the health of her youngest son, Joshua, second from right, will continue to deteriorate because the government won’t fund a new medication that the child’s doctor believes could help him. (CBC)

“That leaves Symdeko and the other drugs coming down the pipeline completely inaccessible,” Haughian said. “Without a proper rare disease strategy for evaluating drugs in place, there is not much incentive for drug companies to even try to develop drugs for rare diseases.”

She and her husband worry their younger son will never get the medication he needs.

“I fear Joshua will spend his childhood getting sicker, living in and out of the hospital, needing more and more treatments, and ultimately dying young,” Haughian told Go Public in an email after the interview, because she didn’t want her sons to hear about her fears.

“While Andre is out playing hockey and hanging with friends … and as he gets older and understands more and more, the ‘survivor’s guilt’ he could potentially feel is a dangerous thing.”

Go Public is an investigative news segment on CBC-TV, radio and the web.

We tell your stories and hold the powers that be accountable.

We want to hear from people across the country with stories you want to make public.

Submit your story ideas to gopublic@cbc.ca.