Police are scrambling to keep pace with criminals who are coming up with creative ways to supply Canada’s black market with firearms.

“Gun violence is getting worse, there is more access to firearms,” Toronto Police Chief Mark Saunders told CBC News. “And so we have to look at the problem from a bigger perspective.”

That means looking more closely at the flow of guns throughout the country.

Police are trying to reduce the number of guns through things like Toronto’s current gun buyback program, which pays $200 for long guns and $350 for handguns. By Friday, two weeks into the three-week program, it had collected 1,235 firearms. But even as programs like this seek to get guns out of circulation, fresh ones are being added through the black market.

The majority of the illegal guns in Canada used to be smuggled across the border from the U.S., but that seems to be changing. According to police, a growing number of guns are bought legally in Canada and resold on the black market, or made here illegally.

Toronto Police Chief Mark Saunders says the force is trying to reduce gun violence in the city, and efforts include a gun-buyback program. (CBC)

That’s not to say smuggling isn’t still a problem. The number of firearms confiscated at the Canada-U.S. border has fluctuated over the years — 751 were seized during the 2017-18 fiscal year, according to the Canada Border Services Agency.

They are hidden in gas tanks, the trunks of cars, in luggage, or on someone’s body. In one remarkable instance involving Montrealer Alexis Vlachos, firearms were smuggled through a public library that straddles the border with the U.S.

Last year, The Canada Border Services Agency (CBSA) was granted an extra $51.5 million in funding over five years to enhance screening, detection and training around firearms smuggling. The RCMP were also given $34.5 million over five years for the new Integrated Criminal Firearms Initiative to enhance intelligence gathering, technology and investigations.

Crowley calls it a “pipeline” — guns smuggled across the border from Detroit into Windsor, and then to cities across the country. He says the influx of firearms has contributed to an increase in violent gun crime in Canada. 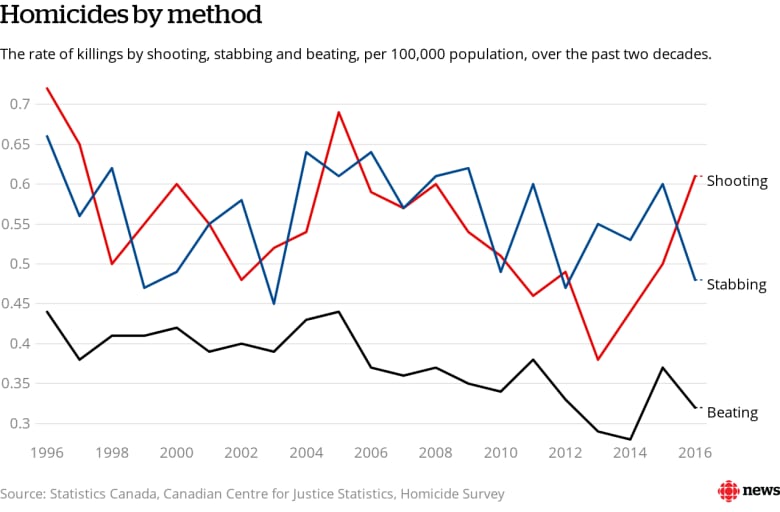 However, Crowley points out that it’s not only guns smuggled across the border that are a concern these days.

Police also say 3D printers and other devices are being used to either make guns, or create parts that turn firearms into semi-automatics capable of firing many rounds a minute. Such guns have been found across the country.

Police in Winnipeg said this week that the number of homemade firearms seized on the streets has spiked from three in 2016, to more than 60 last year.

“I think it’s safe to say that the creation of weapons will be something that will definitely play a huge, disruptive factor when it comes to community safety in the years to come,” Toronto’s Chief Saunders says. 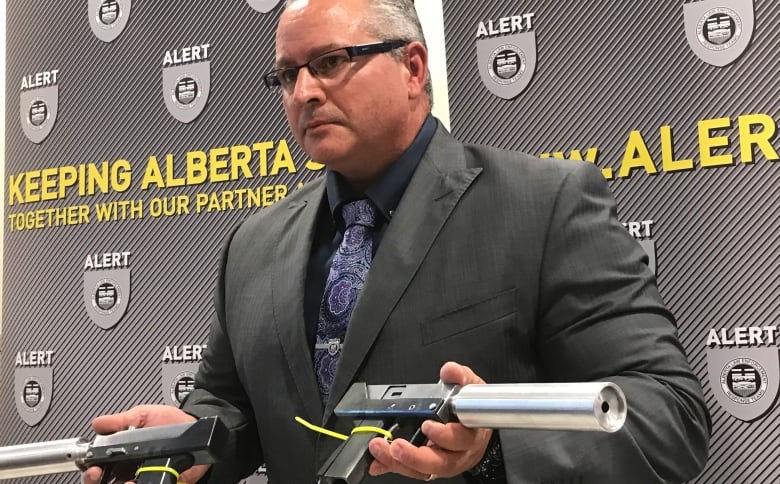 Information compiled recently by data aggregation platform Echosec showed how illegal weapons are available for purchase on the dark web, an encrypted part of the internet where the black market flourishes.

A recent search for keywords including gun, Canada, Ontario and Toronto got 25 hits. Another search for “weapon” got 164 results. All the firearms, from a specialized pistol to assault-style rifles, were apparently available for purchase and could be couriered to someone’s home.

Chief Saunders says the changing sources of firearms and how they’re circulated is a growing concern. “It’s going to be a whole new script, and it will be borderless when it comes to anyone that is motivated to access or use a part.”

Another growing source of illegal guns in Canada, according to police, is firearms that were originally bought legitimately through retailers.

“Fifty per cent of all handguns used in crime, that we’ve been able to trace, have been diverted from legal Canadian firearm owners,” the Canadian Association of Chiefs of Police says.

Some of these guns were stolen from their legitimate owners and resold. But others were bought legally by Canadians and then offered for sale illegally for a profit.

“Straw purchasing” is when a legal Canadian firearm licence-holder buys a gun and then sells it on the black market. Criminals try to remove the serial numbers to make them untraceable.

“Those guns are now in the illegal market and being used as crime guns, typically,” Crowley says.

Superintendent Jason Crowley with the Windsor police department says a gun smuggling ‘pipeline’ moves firearms across the border from the U.S. into Canada illegally. (Mia Sheldon/CBC)

And it is happening across the country. Law enforcement officials refer to widely publicized cases of Canadians being convicted of selling legally purchased guns on the black market.

Among the more notable cases is Justin Green, a former philosophy student at the University of Toronto, who legally purchased 23 handguns over the course of 22 months starting in 2011, including as many as 15 from a single location, and then illegally resold them. That same year, Andrew Winchester purchased 47 handguns in the Greater Toronto Area over the course of six months, selling them on the illegal market for as much as $100,000.

Green and Winchester were only caught after the guns they purchased and resold were found at crime scenes and identified. Straw purchasing cases have also recently occurred in Alberta and B.C., with officers telling CBC News it is a growing concern for them as well.

“Straw purchasing is a hot-button topic,” says Wes Winkel, owner of the Ellwood Epps sporting goods store in Severn, Ont. He says it can be tough for retailers to identify a possible straw purchaser, although there are some telltale signs.

“They tend never to buy accessories. You know, most sports shooters will need accessories to go with their firearms, whether it be holsters, ammunition, stuff like that.”

Wes Winkel, is the owner of the Ellwood Epps sporting goods store in Severn, Ont. He says it can be tough for retailers to pick out a possible straw buyer, and law enforcement authorities have been slow to identify them based on sales records. (Mia Sheldon/CBC)

Still, Winkel says the proposals meant to stop it — like making it illegal to resell a gun to someone who does not have a licence, and extended mandatory record-keeping by gun retailers that includes details of the gun and who bought it — would not be effective because the real issue is a lack of enforcement.

Winkel says years of sales records are already kept by retailers, and yet authorities aren’t effectively using that information to quickly flag straw buyers. “For whatever reason, the amount of time it takes for law enforcement to identify a straw person is too long.”

“There is a demand for these guns, these firearms, and there’s definitely going to be a market,” he says, and the potential for profit will continue to fuel straw buying and smuggling without deterrents.

More from The National’s series on guns in Canada:

READ: Canadians want something done about gun violence — they just can’t agree what

Guns are killing Canadians at a rate not seen in a decade, and gun control can only address part of the problem. Police suggest about half of the guns used to commit crimes are smuggled from outside the country. Most of those are believed to be coming from our southern neighbours through an illegal pipeline. 12:22
Amid a rising gun homicide rate and a growing debate over what to do about it, The National’s special series on gun violence takes a closer look at gun control laws. Some say they persecute, others say they protect, but in recent years the trend has been toward looser laws. 12:12
For many Canadians, legal gun use is a part of daily life, far removed from city shootings that make the news. This has sparked a heated debate between rural and urban residents over how to treat guns in this country. 12:56