For more than a decade, James Kirstein had an excellent relationship with the company that operates a well pad on his property north of Fort Assiniboine, Alta., about 150 kilometres northwest of Edmonton.

The company produced natural gas and Kirstein received an annual payment as compensation for the use of his land.

The cheques always came in February, except this year, when nothing showed up in the mail. Kirstein got a hold of the company, and it only offered 50 per cent of the scheduled payment because of its poor financial health.

As a semi-retired oilpatch worker, Kirstein sympathized and accepted $2,700 rather than the $5,400 he was due.

The company, Trident Exploration, has since ceased operations, leaving Kirstein and other landowners in a difficult position. Trident’s assets may be sold to another company, or else transferred to the Orphan Well Association to be reclaimed.

Kirstein now faces three challenges. He may not receive another payment again, even though the gas wells are still on his land. His local municipality is raising taxes because too many energy companies in the area are not paying their property taxes. His property value may also fall without the revenue from the wells.

“If the receiver can find another company willing to operate these wells, I will be thrilled,” he said. “If not, I guess we are stuck with an orphan well site, which, rather than being an asset, is now a liability.”

James Kirstein owns a property near Fort Assiniboine, Alta. This year, Trident Exploration offered him 50 per cent of the scheduled payment to use his land. (James Kirstein)

He can still recoup the remaining 50 per cent of his payment for this year by applying to the Alberta Surface Rights Board, a quasi-judicial tribunal that helps resolve disputes between landowners and operators about compensation for resource development on private land.

“I hate to do that, as that money has to come from all other Alberta taxpayers,” Kirstein said.

He’s right. The provincial government pays landowners to make up for the shortfalls of energy companies, and those payments have increased to record levels because of the fall in oil and gas prices.

The Alberta government has paid out more than $20 million since 2010. More than $12 million was paid in the last two years alone.

There is now a backlog of about 3,500 applications by landowners for compensation after energy companies failed to pay, according to the board. The wait time for payment is about 18 months for a landowner applying for the first time. 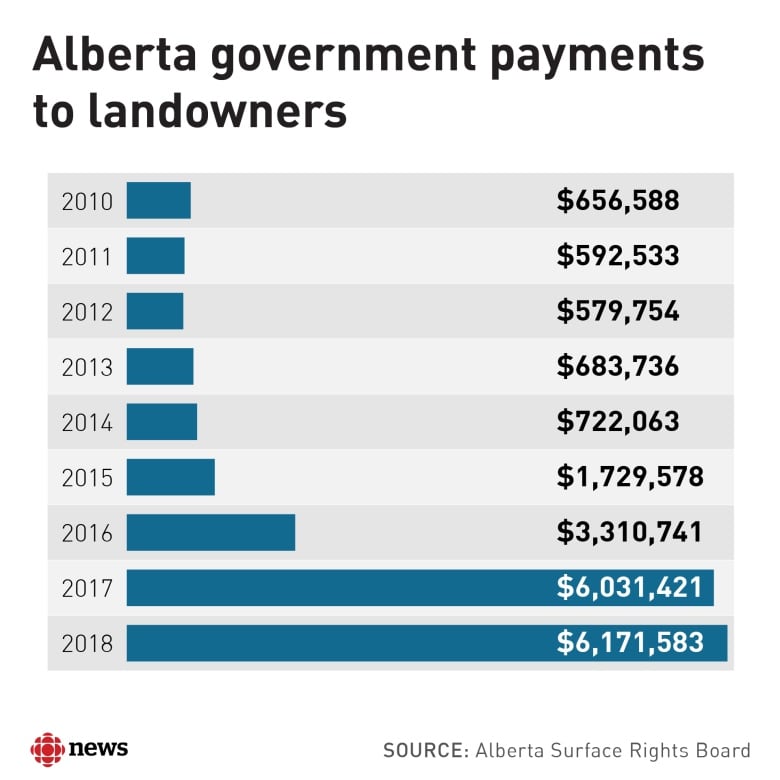 “We expect application volumes to remain high, and, as you can probably guess, it’s created a number of operational challenges for the board,” said spokesman Mike Hartfield.

In early 2010, natural gas prices in the province were about $5.50 per million British thermal unit (MMBtu), but averaged just $1.26 last month. In the last year alone, at least a dozen energy companies have gone bust.

While oil and gas companies’ failure to pay property taxes and compensate landowners is a problem that’s limited to a handful of industry players, it’s a growing one that can have a significant impact.

For instance, after two companies failed to pay their taxes, one Alberta municipality said it  felt “blindsided” as it was suddenly short more than 20 per cent of its expected tax revenue.

Some municipalities and landowners are looking to the provincial government for policy solutions, but industry players are calling for caution.

“We’re in a bit of a catch-22 situation right now,” said Tristan Goodman, president of the Explorers and Producers Association of Canada, which represents junior and mid-sized oil and gas companies. 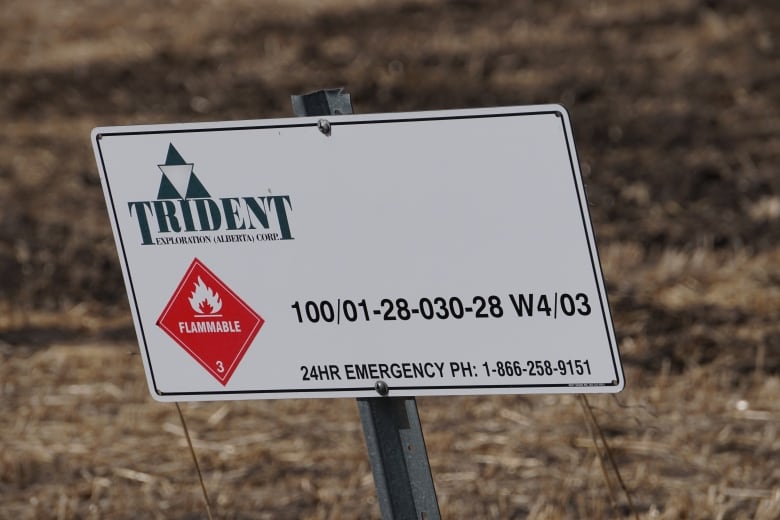 A sign posted near a Trident Exploration natural gas well near the community of Didsbury, Alta. (Kyle Bakx/CBC)

“What we don’t want to do is make the problem worse and push more companies into bankruptcy. We want to keep these folks solvent.”

As prices improve, Goodman said there will be opportunities to ensure companies pay their bills.

For landowners like Marc Raedschelders, who owns a property near Pincher Creek in the southwest corner of the province, the uncertainty of what will happen is frustrating.

While the company that extracts natural gas from his land hasn’t gone bankrupt, it still decided to suspend all payments to landowners because of its poor financial situation.

“I have to deal with having that eyesore on my property forever,” he said. “I’m 64; I’d like to retire there.”

Raedschelders has applied to the Surface Rights Board for compensation. He’s owned the property for a decade and, in that time, ownership of the natural gas well has changed hands twice. At this point, he’d prefer the well just be reclaimed.