After struggling for three years to get a settlement, a Fort McMurray woman wants to see changes to the Insurance Act.

Jamie Harpe lost her home in the May 2016 wildfire that destroyed 15 per cent of the buildings in Alberta’s oilsands city.

“Three years into it, we are still paying a mortgage on a pile of ashes, and there doesn’t seem to be an end in sight,” she said.

After the fire, Harpe said, she was able to settle a claim for the cost her home’s contents with her insurance company, Aviva.

But the house claim remains unsettled.

The two parties almost came to an agreement recently, she said, except for that matter of who would pay for heating and hoarding costs during a winter build.

The most recent estimate for the cost of the rebuild was from two years ago; two different companies assessed the cost at between $3.1 million and $4.3 million, said Harpe, the president of an oilfield servicing company she owns with her husband.

She estimates the house was about 7,000-square-feet. Her lawyer requested a quote for the cost of heating and hoarding — a fence put around the construction site so there is no unauthorised access — and that estimate came in at between $200,000 and $400,000.

Harpe said she doesn’t think her family should have to shoulder that cost.

Jaime Harpe bought a piece of land two doors down from her original house. She put a pre-fabricated home, pictured, on the property. (Jamie Malbeuf/CBC)

She has been paying lawyers to help her with the claim, which she said has cost her about $70,000 over the last two years.

In the meantime, she bought property two doors down from her old house, and put a pre-fabricated home there.

She’s frustrated, because the money for living expenses from the insurance company ran out, and her family has been paying additional expenses out of pocket.

Now they’re paying for a second mortgage on top of almost $5,000 a month for the first mortgage.

The insurance industry is going to be here until the very last claim is closed in Fort McMurray.– Rob de Pruis, Insurance Bureau of Canada

She would like to see the Insurance Act changed so the companies have to pay additional living expenses for lengthy cases such as hers.

At this point, she said, her payout should be higher than the cost of the rebuild, because of the money they’ve spent on additional living expenses.

The provincial and federal governments should make changes to insurance regulations that benefit consumers, she said

Harpe said the claim has taken a toll on her mental health.

The Fort McMurray wildfire was the most expensive insured disaster in Canadian history.

Rob de Pruis, director of consumer and industry relations for the western arm of the Insurance Bureau of Canada, said more than 60,000 insurance claims were opened after the fire.

He said less than one per cent of those files remain open, and those are typically the complicated files, or ones where the company and homeowner couldn’t come to an agreement.

De Pruis said in most cases when the claim is drawn out, it’s because of misunderstandings or poor communication between the company and homeowner.

There are options for the homeowner to pursue if an agreement can’t be reached: the company’s internal ombudsman or an independent company called the General Insurance Organization.

They can facilitate conversations between the two parties. 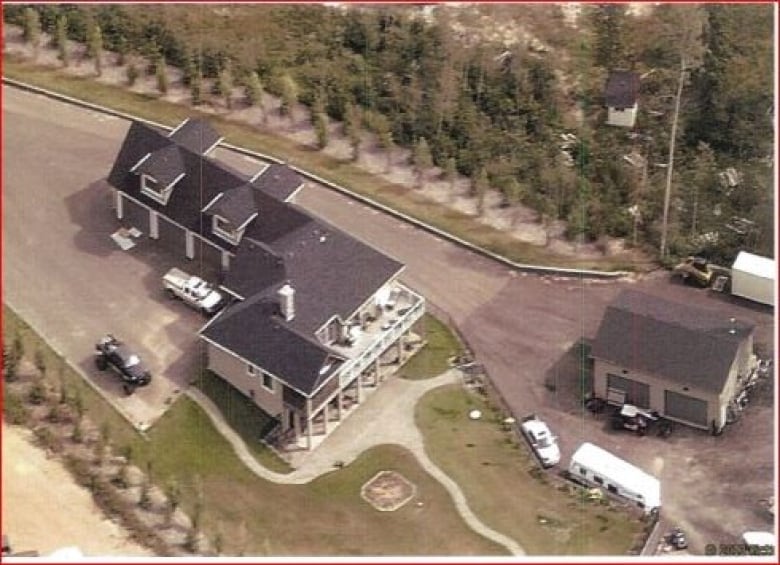 An aerial photo of Harpe’s home before it burned down. She says it shouldn’t take three years to get an insurance settlement. (Submitted by Jaime Harpe)

There is also a formal dispute resolution process, which is the route Harpe is taking. This is a facilitated discussion with representatives and specific timelines.

As a last resort, De Pruis said, the claim could go to court.

“The insurance industry is going to be here until the very last claim is closed in Fort McMurray,” he said.

De Pruis said the IBC is available to help anyone who is struggling with an insurance claim.

Aviva declined to comment because the matter is before the courts.